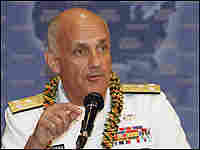 Accusations that the Bush administration is playing politics with science are nothing new. But Tuesday, those charges came from one of the administration's own appointees — former Surgeon General Dr. Richard Carmona.

But all three agreed that none faced the sorts of political challenges that confronted Carmona, who finished his four-year term last year. He testified that the very position of surgeon general is in grave danger.

Carmona said when he first came to Washington in 2002, he was somewhat naïve.

He recalled a meeting where senior White House officials talked about global warming as a liberal cause with no merit.

"I remember thinking, 'I know why they want me here, they want me to discuss the science; they don't understand the science.' So I had this scientific discussion for about a half an hour, and I was never invited back to the meeting."

Carmona soon realized what he had gotten himself into, however. When he wanted to launch a public education campaign on the science of stem-cell research, he was told he couldn't.

"I was blocked at every turn, told the decision had already been made. Stand down, don't talk about it," he said.

Carmona said that throughout his term, his speeches were edited and talking points were provided by political appointees. President Bush was to be mentioned at least three times per page for example.

Carmona said his travel was also carefully monitored. After he issued a report on the health of those with disabilities, he was invited to speak to a group affiliated with the Special Olympics.

"I put in my paperwork to go to this meeting where I was going to give the keynote addresses ... and I was admonished for doing that," Carmona said. "And the reason I was admonished for doing this is, unfortunately, I was told I would be helping a politically prominent family.... I said, 'This is about sick kids. It has nothing to do with who is moving the project.'"

The politically prominent family was the Kennedys.

Carmona spent most of his last year unsuccessfully trying to issue a report that he and his staff had written on global health.

"And there was no nebulousness," Carmona said. "I was told, 'This will be a political document or you are not going to release it.' And I refused to release it because I would not put the political rhetoric into that document that they wanted, because it would tarnish the office of the surgeon general when our colleagues saw us taking a political stand."

Virginia Congressman Tom Davis, the committee's senior Republican, said he was sympathetic to Carmona's complaints, but only to a point.

"I'm not sure what the boundaries are for appointed political officials who sometimes have opinions different from the elected administration," Davis said. "It's tough trying to define where you be a team player and where you speak out, and you try to balance that every day. But we have politicians who run the government, and not scientists."

The Department of Health and Human Services issued a written statement disagreeing with Carmona's testimony. It said he was "given ample opportunity to communicate his views to the American people, and he routinely did so in hundreds of appearances before the public, the media and Congress."

President Bush's nominee to replace Carmona, James Holsinger, goes before a Senate committee for his confirmation hearing on Thursday.