Accessibility links
Brutal Gangs Terrorize Slum Residents in Kenya Over the past few months, human heads and other body parts have been turning up all over Nairobi. Authorities believe it's the work of the Mungiki, a mysterious, vaguely militaristic organization of mostly young Kenyan men. 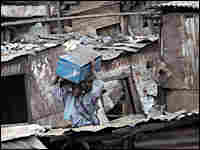 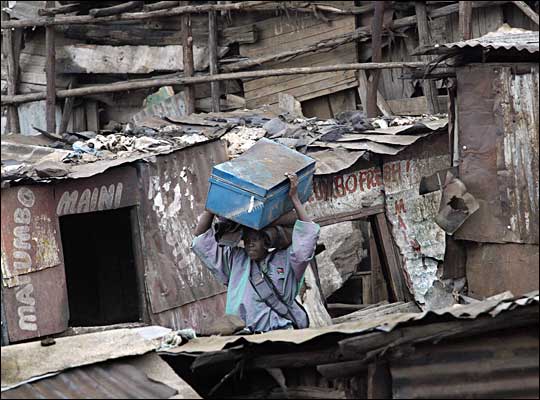 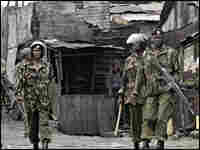 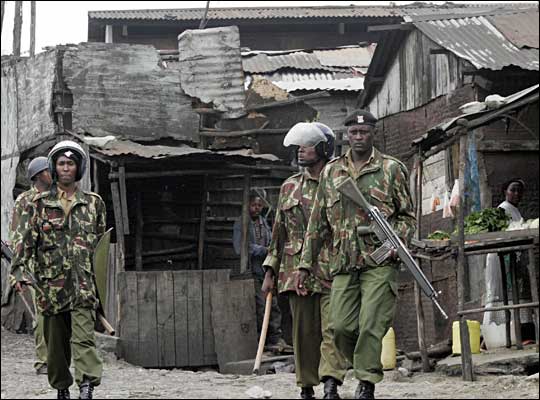 Police have intensified their patrols in Mathare, a Nairobi slum. 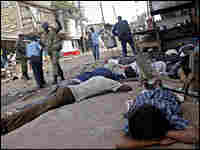 Armed police officers conduct a raid on a slum in Nairobi as part of a crackdown on Mungiki. Tony Karumba, AFP/Getty Images hide caption 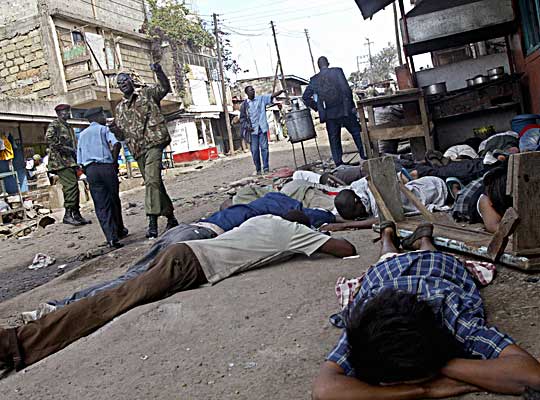 Armed police officers conduct a raid on a slum in Nairobi as part of a crackdown on Mungiki.

More than 100 brutal murders in and around Nairobi, Kenya, have residents frightened and police baffled. Among the dead are a dozen police officers as well as schoolchildren and scores of people who live in the capital's elaborate necklace of slums.

The violence is "gang-related," but that phrase never quite tells the story. The police lack answers, and in many cases, the only solid pieces of evidence are severed human heads that are turning up all over town.

Dominick Wabala, a longtime crime reporter for Kenya's largest newspaper chain, says that more than 20 Kenyans have been beheaded in recent months in connection with gang violence.

"People are being hacked and their bodies dumped. People's heads are being sawed off. We're having heads put on sticks and dumped next to provisional administration offices. It's getting a bit crazy," Wabala says.

At the center of Nairobi's current nightmare are the Mungiki, a secretive gang formed during a period of pitched ethnic fighting and economic hardship in Kenya in the late 1980s.

Overwhelmingly populated by the Kikuyu, the nation's largest ethnic group, the Mungiki are so secretive that outsiders often don't know who is part of the group and who is not. Whatever their initial ideology, today's Mungiki are synonymous with organized crime.

In the local language, "Mungiki" means "the multitude," and gang leaders boast that their membership numbers in the millions throughout Kenya's Central Province, the Rift Valley and the capital city of Nairobi—a far cry from Kenya's Human Rights Institute estimate of 100,000 or less.

Living on the Fringes

In a city where the poor live within eyeshot of the luxurious houses of business executives, well-paid foreigners and Kenya's pampered and ostentatious Members of Parliament, some of the poor turn to crime — and the Mungiki.

Dean of the Kenya Human Rights Institute Mutuma Ruteere has been studying the Mungiki for the past 10 years and says the leaders of the organization number fewer than 10, while the rest survive on the extreme edges of life.

"Some of these young men actually start living for the first time by getting involved in these gang activities, these Mungiki," Ruteere says. "For the first time they have hope. They have something they can do. These are young people who don't know what they'll eat tomorrow. Policing is for the short term, but for the long term is to try to give hope to young people in this country. "

The Mungiki occupy the area's teeming slums, both serving and targeting their neighbors.

The group manages rackets that earn them millions of dollars per year: protection for slum residents and businesses, neighborhood trash collection, and perhaps most importantly, a daily payoff from more than 30,000 small-bus drivers here.

"They were easily accepted by the community because they provided service that was needed but lacking. They just filled that gap ... for a fee of course," Wabala says.

In a neighborhood called Banana Hill, someone attacked a 24-year-old bus conductor with an axe, nearly beheading him. The victim's father says he considers himself lucky that the killers didn't make him hunt for scattered body parts, as they often do.

"I think they do this so you can't easily identify the people. They take the body parts to different places, so it's hard to identify them. I think maybe that's their motive," says the victim's father, an evangelical minister who does not want the family's name mentioned.

At a recent town hall meeting, slum residents gathered to discuss the mounting insecurity and pray.

"When I was growing up, yes, there were robberies but they never had the guts to come when you are there. They would break in and take away things," says event organizer Shamsia Ramadan. "Nowadays, they do it when you are there and they go ahead and rape the women. It keeps getting worse by the day."

But one pastor's loss is apparently another pastor's good fortune.

Ndure Waruinge is a founding father of the Mungiki who says he has since left the organization and started his own Christian evangelical church, though he says he still benefits from the fear the group inspires.

"Due to the demonization of this organization, wherever I go ... I wish I could walk with you on the street ... People respect me because they fear me. So whatever they are doing now works for me completely. And I say that's God," he boasts.

According to Waruinge, the current cycle of violence is, in part, a result of the Mungiki leadership getting greedy. He says they're killing each other.

But Waruinge has ambitions to create a more fearsome organization, and says Jesus is the way.

"Jesus worked in myth. He creates 5,000 breads, 5,000 fish. Does that not create fear in you to fear that person?" Waruinge says. "This is how God works. God does not know democracy. You're either for me or you'll die."

He says Christian evangelism will help him create a national Mungiki organization that crosses all the ethnic lines of Kenya.

The police are responding to the brutal crime wave and say they have arrested more than 3,000 gang members or associates.

"In war, the generals are hardly killed. But you know the war has been lost when the foot soldiers can no longer attack. And we believe it's just a matter of time," says police spokesman Eric Kiraithe.

Kenyan law enforcement officials face an uphill battle against the political clout of the Mungiki, who have swayed enough voters to get many politicians elected.

And because 2007 is an election year, government leaders, aside from Kenya's president, have so far been muted in their response to the crime wave