Accessibility links
Falling in Love with Limas It's the season for fresh lima beans — despised by generations of schoolchildren but beloved by writer D. Cameron Lawrence. She explains why she loves the the nutritional powerhouses, and shares her favorite recipes.

Falling in Love with Limas

Falling in Love with Limas 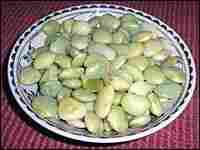 Fordhooks are among the most common variety of lima beans. D. Cameron Lawrence hide caption 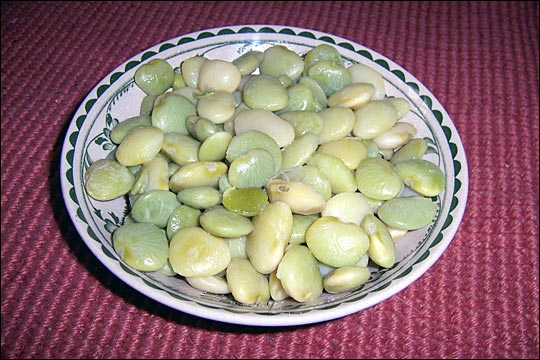 Fordhooks are among the most common variety of lima beans.

D. Cameron Lawrence is a freelance writer and Peabody Award-winning producer. She lives in Louisville, Ky., visits her native state of Connecticut often, and takes pride in calling herself a Nutmegger.

Lima beans were a staple in my mother's New England kitchen, bridging the span between autumn's bounty and the harvest of spring vegetables.

They were, however, on my childhood list of despised foods. They were bulbous, starchy and bland. And who can forget those cold, green lumps staring back from the school cafeteria tray?

Then a few years ago, a friend took me to a local Mayan café and pushed one dish: lima beans with roasted pumpkin seeds. I gave in. She was right. Tender, succulent and nutty-tasting, with a kiss of the fire over which they'd been cooked, these were not the lima beans I remembered. I fell, and I fell hard.

Now limas are not only a staple of my diet but often, the star of a meal. They're easy to fix with just a bit of olive oil, margarine or butter, salt and pepper. Or I can dress them up with other vegetables and seasonings. As a vegetarian, I like their heft as a side dish, meaty little bundles that complement lighter fare.

Lima beans were named for the capital of Peru, where they have been growing for at least 7,500 years. Cultivation spread northward, probably through Mexico into the American Southwest, then eastward. Food historians believe Spanish ships took dried beans to Europe and the Portuguese took them to Africa. Today, limas are popular worldwide.

These little beans are nutrition powerhouses, packing protein, fiber, iron, manganese, folate, thiamin, potassium and other nutrients into a modest calorie count, with just a speck of fat and no cholesterol.

But a note of caution: Lima beans should not be eaten raw. They contain a cyanide compound, a natural part of the plant's defense mechanism. The U.S. restricts commercially grown limas to varieties with very low levels of the compound, but all should be handled with care. Cooking the beans uncovered allows the poison to escape as a gas. To be perfectly safe, drain the cooking water.

Limas are always available dried or canned, but I like the taste of frozen ones best. And this is the time of year to find fresh lima beans at farmer's markets, where knowing shoppers grab them up, hurry home and shell the pods right before throwing the tender beans into boiling water.

Keep in mind that a lima by any other name will taste as sweet. In some places, they are called chad beans or Madagascar beans. In the American South, they go by the general moniker "butter beans." Some in the region refer to tiny lima beans as butter peas or sieve, Carolina or "sivvy" beans, and speckled beans are sometimes called rattlesnake beans.

Ask for butter beans up North and you're likely to get a beige-colored bean stew made from dried limas that are soaked, drained then simmered with seasonings.

There are two principal types of lima beans. Fordhooks are the larger and pale green. Baby limas are not immature Fordhooks but a separate variety that are smaller, less starchy and more delicate tasting.

Other varieties come in many shades besides the common cream or green color, including red, purple, brown, black and the speckled ones. Many of these, like the festive Christmas lima, are heirloom varieties. That bean is cream-colored with maroon mottling and has a flavor reminiscent of chestnuts.

But I'm taking things slow. So far, I've stayed mainly with Fordhooks and baby limas. Who knows, though, where this love affair may go? 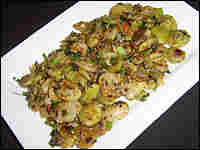 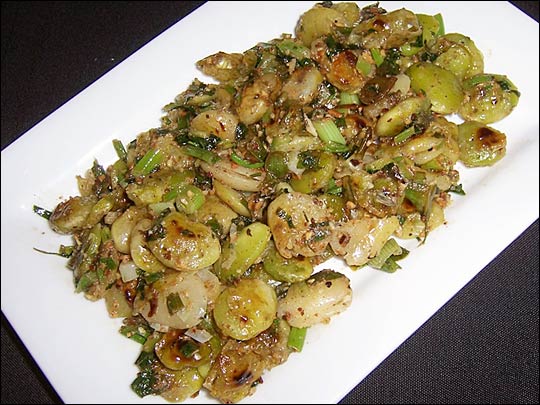 This is the dish that ignited my new passion for lima beans. Mayan chef Bruce Ucán of the Mayan café in Louisville, Ky., grew up in a small village in the Yucatan in Mexico, where people cook the beans over open fires. He says this recipe is adapted from one his mother prepared. If frozen limas are used, they will have to be defrosted. If you use fresh limas, blanch them for 1 minute then rinse and dry. All the ingredients should be ready to go since this is a quick process, similar to using a wok.

If using fresh beans, blanch them in boiling water for 1 minute, then rinse and dry. If you use frozen beans, defrost.

Chop the green onions and parsley, medium to fine. Set aside.

Roast the pumpkin seeds in the preheated oven, then grind them (medium to fine) in a food processor.

Put the sesame oil in a large skillet on medium heat. When the oil starts smoking, throw the lima beans in first. Saute them until they are brown and roasted.

Add all the other ingredients except the lemon juice and saute for another minute. Then add lemon juice, and serve. 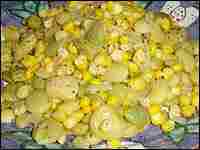 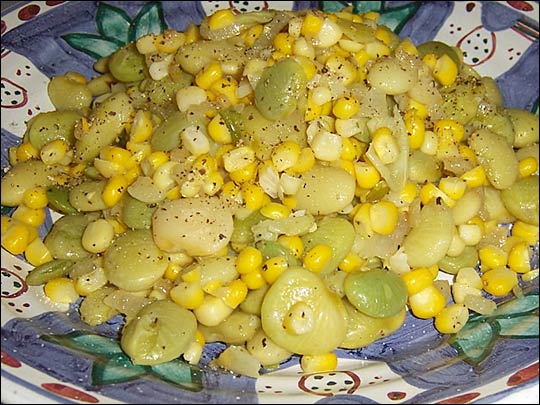 From a Narraganset Indian word meaning "boiled whole kernels of corn," this simple dish is best with fresh beans and fresh corn, capturing the delicious essence of summer's harvest. Here's my take on it.

Put oil in a large skillet and slowly saute the onion and garlic until very tender, about 15 minutes. Set aside.

Bring about 2 cups of water to a boil in a saucepan. When water is boiling, add lima beans, reduce heat and simmer until tender, about 20 minutes.

Cut the kernels off the ears of corn. Add the corn to the saucepan with the limas and cook another 5 minutes or so. (I prefer the corn a bit firm, not cooked too long.)

Remove from heat and drain the water.

Add the onions, garlic and butter or margarine to the corn-lima bean mixture. Toss lightly then season with salt and pepper. Ready to serve.

This tangy variation of the bean-corn combination is adapted from a recipe by Gil Logan, executive chef of the restaurants at Churchill Downs in Louisville, Ky.

In a large saucepan, bring 2 cups water to boil, add lima beans and bring back to boil. Reduce heat and cook until tender, about 20 minutes. (Watch water and add more if necessary.) Drain and set aside to cool.

Over an open flame, char peppers to blister the skin, then cool, peel and remove seeds. Dice. Or put peppers in a small roasting pan, and roast in a 400-degree oven for about 1 hour, turning every 15 minutes to char the skin evenly. Let cool (the peppers will deflate considerably).

Whisk together the olive oil, vinegar and mustard.

In a bowl, combine all the vegetables and toss. Add about half the dressing, toss and taste. Add more dressing to taste. Adjust seasoning with salt and pepper.