Accessibility links
'Order of the Phoenix': Dread Again, and Fabulously Fresh Air's critic says the fifth Harry Potter film trades the last glimmers of childish wonder for a brooding, paranoid darkness, a grainy palette and a series of horrific montages — and it's the best Potter film yet.

Listen
'Order of the Phoenix': Dread Again, and Fabulously 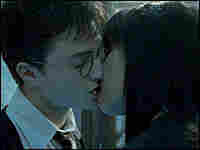 Teen angst: Harry Potter (Daniel Radcliffe) and Cho Chang (Katie Leung) get a little closer, but their relationship doesn't quite get sorted out in Harry Potter and the Order of the Phoenix. Warner Bros. hide caption

Teen angst: Harry Potter (Daniel Radcliffe) and Cho Chang (Katie Leung) get a little closer, but their relationship doesn't quite get sorted out in Harry Potter and the Order of the Phoenix. 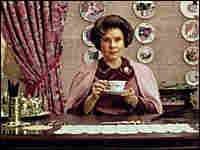 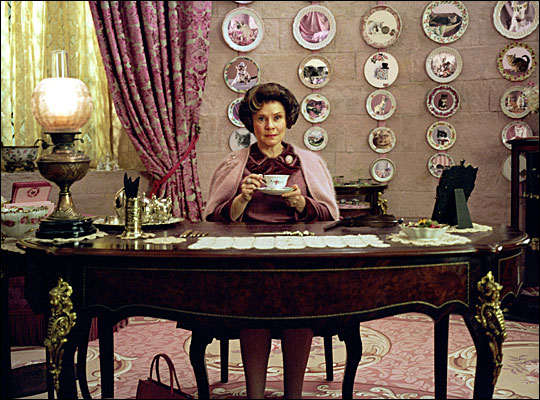 Head of the new 'Order': Imelda Staunton does the mockingly-polite thing with relish.

As the mania builds for the seventh and last book in J.K. Rowling's Harry Potter series, the question hangs, "Will Harry get whacked?" Ten days ahead of its release comes the fifth movie, Harry Potter and the Order of the Phoenix, which douses the final embers of childish wonder. Here is a landscape of sexual frustration, madness, Fascism and death. This is not a family movie; it's not even Gothic horror, like the last Potter movie, the chilling Goblet of Fire. Order of the Phoenix is practically Orwellian. The palette is grainy and dank, the faces gray, the hero's alienation festering.

It's quite a change from director Chris Columbus' Christmassy first movie, Harry Potter and the Sorceror's Stone, which hardly began to suggest the pagan energy — and anger — out of which Rowling's series was born. The books have been slammed by literary poobahs like Harold Bloom, but I love their balance between enchantment and dread.

Order of the Phoenix is, in some ways, an improvement over Rowling's novel, which is mired in Harry's angst and builds to a climactic wand-off better ogled than read. That climax is an eye-popper. The director, David Yates, made the great British miniseries State of Play, a literate newspaper drama with a vein of sublimated violence. Here, he lets loose with horrific montages to evoke his hero's estrangement.

A fixture in Harry's nightmares is Lord Voldemort, played by Ralph Fiennes, his features primordially puttyish. Hogwarts headmaster Dumbledore, played by Michael Gambon, has turned frosty and elusive. The oddly paranoid Ministry of Magic has mounted a campaign, through its Pravda-like newspaper, to discredit the notion of the dark lord's return from limbo — along with Harry's credibility.

Above all, Harry Potter and the Order of the Phoenix is dominated by Imelda Staunton, best known for Mike Leigh's Vera Drake, overacting gleefully as the latest and most bloodcurdling Defense Against the Dark Arts teacher, Dolores Umbridge. A stand-in for the Ministry, she metes out ghastly punishment with a smile of mocking gentility — and palpably loathes her students' youth and freedom.

The movie irons out a few of Rowling's intriguing dissonances — among them the morbidity of Harry's godfather Sirius Black, played by Gary Oldman. It also doesn't solve the problem of Harry's beloved Cho Chang (Katie Leung); she's still a cipher, even in the course of a smooch with Harry heard 'round the world. But there is a marvelous turn by a young actress new to movies, Evanna Lynch, as the queerly introverted Luna Lovegood: This flake flutes her lines, but not always on key.

The supporting cast is the usual embarrassment of British riches. Among the standbys, Alan Rickman as the supercilious Snape barely opens his mouth; the lines wheeze out like the low bass of a bellows.

The central trio — Daniel Radcliffe's Harry, Emma Watson's Hermione and Rupert Grint's Ron — is now on the far side of puberty, which makes me a little sad, but there's no stopping the wheel. Their aging brings thoughts of their mortality. Having confidently proclaimed that David Chase wouldn't kill off Tony Soprano too early, I'm loath to predict what the final Potter book will bring. But Order of the Phoenix has me worried: How can Harry defeat everything murderously repressive in the world without making the ultimate sacrifice?