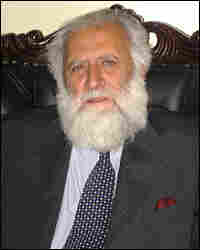 When Afghanistan's attorney general was appointed by President Hamid Karzai, he was given the task of cracking down on corrupt practices. Abdul Jabar Sabet declared it his jihad, or holy war. But critics say Sabet is a loose cannon who is failing to deliver.

When asked to clarify, Sabet said, "Temptation, poverty and war.

"For example, prosecutors make an average of $60 a month. That's nothing. You people spend $60 some days on your parking."

Afghans had high hopes that the Pashtun lawyer from Montreal would end government corruption. But so far, Sabet's tenure has disappointed most Afghans. A recent survey found they view corruption as the worst in 30 years.

Critics add that Sabet's confrontational style has overshadowed his role as a crusader against corruption.

For example, they point to April, when Sabet arrested a newscaster from Tolo TV station for misquoting him. Or his ongoing dispute with a top Army general, who Sabet says tried to kidnap him and shot at his car. The general denies the kidnap claim, and says the shooting was in self-defense.

One vocal critic, Afghan Senator Mohammed Alam Ezedyar, says Sabet, who is a Pashtun, is racist — that he only targets Afghans from other ethnic groups.

"We're busy gathering votes for his impeachment," Ezedyar said in Dari. "Whoever has authority to do something and who wants stability in this country, should force him to step down."

Sabet dismisses such critics as nothing more than political rivals.