In Act 3, Susanna and the Countess draft a message to entrap the Count, in the gently beautiful "Letter Duet."

In the final act, Susanna sings the guileless love song, "Deh vieni non tardar," intended for Figaro, only to have him think she's betraying him with the Count. 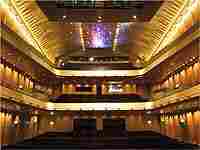 The Salzburg Festival production of The Marriage of Figaro was performed in the newly-refurbished House for Mozart. Karl Forster hide caption

The history of opera is full of brilliant efforts by standout teams of composers and writers. But a few stand out above all the rest: Falstaff by Verdi and Boito, Der Rosenkavalier by Strauss and Hofmansthal, and The Marriage of Figaro, by perhaps the greatest team of them all, Wolfgang Amadeus Mozart and Lorenzo da Ponte.

Not coincidentally, those operas also have something else in common. All three are comedies that reach a level of humanity few tragedies have ever achieved.

Figaro explores territory that many found worrisome when it was written in the mid-1780s — the often contentious relationship between the classes. That's why the original play, by Beaumarchais, was banned by ruling authorities in France, and why Mozart's opera made the Austrian monarchy more than a little bit nervous. Both the play and the opera clearly illuminate the limitations of rank and privilege, showing us that common sense can readily overcome wealth and power, and that genuine humility easily upstages unwarranted arrogance.

Da Ponte's dialogue is subtle and meticulously layered — but at the same time, witty and involving. Mozart's music is well-crafted and immensely sophisticated — but also tuneful and infectious.

Their opera, with all its artistic contrasts and complexities, reveals some simple, real-life truths: That harsh economic realities are no impediment to the instinctive richness of human intellect, and that stultifying social conventions will never dampen the spontaneity of human emotions.

On World of Opera, host Lisa Simeone brings us The Marriage of Figaro in an insightful production from the Salzburg Festival, in the composer's hometown. It stars the brilliant young soprano Anna Netrebko as Susanna, and bass Ildebrando d'Arcangelo in the title role.

The Story of 'The Marriage of Figaro' 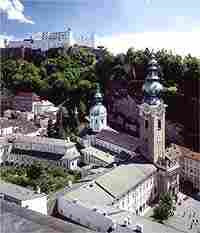 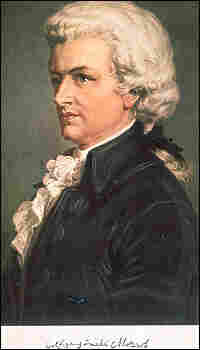 Mozart completed The Marriage of Figaro when he was just shy of his 30th birthday, in 1786. hide caption

BACKGROUND: The Marriage of Figaro is one of the few examples of a successful literary sequel. The original play by Beaumarchais was a follow-up to his previous hit, The Barber of Seville. The first audiences of Mozart's opera knew that play — and we still know it through the operatic version by Rossini. So for many people, this opera's characters are already quite familiar. But their circumstances have changed.

In The Barber of Seville, a young nobleman named Almaviva won his lover Rosina away from her lecherous guardian Dr. Bartolo — with considerable help from his friend Figaro. As The Marriage of Figaro begins, it's three years later. The young lovers are now the Count and Countess Almaviva. Figaro is the Count's personal valet, and he's engaged to marry the Countess' maid, Susanna.

ACT 1: Figaro and Susanna are preparing for their wedding. He and his bride are slated to occupy a room between the private chambers of the Count and the Countess. Figaro thinks that will work out just fine. Susanna thinks otherwise. She tells Figaro that the Count has been making advances toward her. In their new room, all he'll have to do is lure Figaro away on some errand, and the Count will be right next door to press his lecherous demands. Figaro hesitates to believe that his old friend the Count could have anything so nefarious in mind. But when Susanna convinces him, Figaro begins to display the same cunning and confidence that were his trademark in The Barber of Seville.

We then meet Figaro's old nemesis Dr. Bartolo, and his housekeeper, the aging Marcellina. Figaro has borrowed money from Bartolo, but he had no collateral. To secure the loan he agreed to marry Marcellina if he couldn't pay his debt. Well, the debt is due, and Bartolo demands that Figaro fulfill that obligation.

With Susanna alone in her room, the young page Cherubino rushes in. He's in the throes of adolescent ardor, and says he's desperately in love with the Countess. But he has also been caught with one of the servant girls, and the Count is hot on his heels. Cherubino hides when the Count appears, then eavesdrops on the Count's latest proposition for Susanna. When the Count finds him, he banishes Cherubino to the army.

Figaro then turns up with a group of peasants, who want to thank the duplicitous Count. He has recently announced that he's forgoing his "feudal right" to be with any woman in his realm on her wedding night. When the Count accepts their praise, Figaro suggests that he and Susanna should be married immediately. The Count puts him off. Considering his designs on Susanna, and his renunciation of the feudal right, he's better off if Susanna is single. The act ends as Figaro teases the lovesick Cherubino about his impending military service.

ACT 2: Rosina, the Countess Almaviva, is upset about her marriage, which is on the rocks. Her husband is not only scheming to prevent the wedding of their servants Figaro and Susanna, but is also planning to have Susanna for himself. Yet, despite his behavior, the Countess still loves her husband, and her unhappiness colors the opening number of Act 2.

She's joined by Susanna and Cherubino. Together, the three hatch a plan. Cherubino will dress up as Susanna. The Count will be lured to a meeting with this phony Susanna by a trumped up letter, and the Count's duplicity will be exposed.

As the two women are dressing Cherubino for his role, Susanna leaves to find a ribbon. Then the Count knocks on the door. Rather than be found alone with the Countess — and in drag, no less — Cherubino ducks into a closet. When the Count enters, Cherubino knocks something over. The Count hears this, and demands to know who is hiding in that closet. The Countess tells him it's Susanna, but refuses to let him see for himself. He angrily leaves to fetch a crowbar, to force open the locked closet door, and the Countess follows to try and calm him down. When they're both gone, Susanna slips back into the room — and into the closet — while Cherubino has no choice but to leap out a window into the garden.

When the Count and Countess return, they are both amazed to see that it actually is Susanna in the closet. The Countess is confused –- but relieved. The Count is embarrassed and begs forgiveness for his unseemly suspicions. When the gardener appears in a tizzy, saying someone has just jumped out the window, Figaro comes to the rescue. He says he's the one who took a flying leap into the nasturtiums. He also takes advantage of the Count's confusion to renew his demand that the Count allow his marriage to Susanna. But Bartolo and Marcellina join in. When they produce evidence that Figaro has actually agreed to marry Marcellina, the Count gleefully cancels Figaro's wedding.

ACT 3: Susanna hatches her latest scheme. She pretends that she's finally willing to go along with the Count's lascivious suggestions, and proposes a meeting later that night — which was to be her wedding night! — in the palace garden. The Count eagerly agrees. But as she leaves, he overhears her talking to Figaro and realizes the two have something up their sleeves.

Next there's a hearing to determine exactly who it is that Figaro is legally bound to marry. When it looks like he's going to be stuck with Marcellina, he claims that he can't marry her because he's actually a nobleman, stolen from his parents at birth. He displays a distinctive birthmark on his arm. Marcellina recognizes the mark, and nearly faints. It turns out that she is Figaro's mother — and his father is his old nemesis, Dr. Bartolo. Figaro can hardly marry his mother, so Susanna and Figaro can be married at last — much to the Count's chagrin. Everyone leaves to prepare the ceremony.

The Countess is left alone, wondering what happened to her formerly happy marriage. Susanna joins her, and the two write a letter to the Count, inviting him to meet Susanna later, in the garden. They send it off, sealed with a hairpin, instructing him to return the pin as confirmation of the meeting. Figaro's wedding finally gets under way, and during the confusion of the act's final ensemble, the Count is handed the fateful letter from Susanna.

ACT 4: That night, in the garden, the servant girl Barbarina is searching for something in the dark. Though she's barely a teenager, she has already been the object of the Count's attentions. Now she's acting as a courier between the Count and her older cousin Susanna, who has just been married. She's looking for the hairpin that sealed Susanna's letter — the Count has sent her to return it. Her brief, opening number suggests a young woman who is disturbed at the adult world of amorous schemes that she's just now discovering.

As she searches, Figaro confronts her. When he discovers she's a messenger between Susanna and the Count, he's devastated. Figaro is convinced that Susanna is plotting to betray him, especially when he hears her nearby, singing about her "lover" — though she's really singing about Figaro.

Meanwhile, the Count is due any time for his assignation with Susanna. To fool him, the Countess and Susanna have agreed to exchange clothes for the evening. That way, when the Count goes into his seduction routine, he'll be romancing his own wife without knowing it.

Before long, Figaro figures the whole thing out, and decides to play a joke of his own. He goes to Susanna, pretends he really does think she's the Countess, and tries a few moves of his own. This enrages Susanna, but just momentarily. She soon sees through him, and they have a good laugh over it.

Things come to a head when the Count finally shows up, eager for his tryst. First he tries to seduce his wife, thinking she's Susanna. Then, when he sees Figaro with a woman he thinks is the Countess, he self-righteously accuses her of infidelity. Susanna, still imitating the Countess, begs the Count for forgiveness. He refuses. At that, the Countess reveals herself, and the Count is finally humbled. This time, it's his turn to ask for pardon. The Countess generously embraces him, and the opera ends with both couples reconciled.