Accessibility links
Heart Hospital Rankings Don't Reveal Whole Picture Ratings like U.S. News and World Report's list of top hospitals generate a lot of buzz, but doctors say no single ranking of a hospital will tell patients everything they need to know. 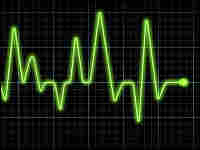 An electrocardiogram, or graphical reading of the heart's electrical activity. iStockPhoto.com hide caption

A new Web site from Medicare allows you to type in your zip code and see how hospitals in your area rank on heart attack and heart failure care.

On Friday, U.S. News and World Report magazine releases its annual list of the 50 best hospitals for treating heart problems.

These ratings generate a lot of buzz, but they aren't necessarily a list that people at risk of heart attacks should follow.

Dr. Harlan Krumholz, a heart specialist at Yale University, has always been curious about the U.S. News and World Report rankings.

He says when his hospital makes the list, Yale makes a big to-do about it.

"We take out ads and there are banners around," Krumholz says. "And if people don't know about it, we try to let them know. I mean, hospitals themselves ... try to take advantage of it and use it for marketing. But the question people may have is, you know, how well does this rating system really characterize the performance of my institution?"

And for Krumholz the essential question is: How many patients who come to the emergency room with a heart attack survive and live at least a month?

To get the answer, Krumholz analyzed the U.S. News rankings from 2003. At the top of the magazine's list were prestigious institutions including Hopkins, Harvard, Emory and Stanford.

Krumholz collected heart attack data on 3,800 hospitals nationwide. Overall, he says, 35 of the U.S. News hospitals were in the top rank on heart attack survival.

"What it shows is that the ranking system — which, by and large, is built on reputation and identifies some of the most famous and well-known institutions in the country — did a pretty good job of picking out the hospitals that did better than expected," Krumholz says.

But there are several important caveats. On average, the top hospitals didn't do much better than all the rest. Sixteen percent of heart attack patients treated at the U.S. News top hospitals died. compared with 17.9 percent at all the others.

What's more, four out of U.S. News' top 50 hospitals had mortality rates that were among the nation's worst.

"The mere fact of being famous or well known doesn't guarantee that patients are going to get the best care," Krumholz says.

The editors of U.S. News and World Report say they're gratified that 35 out of their 50 made Krumholz's top rank. But editor Avery Comarow, who supervises the annual ranking, says his review isn't designed to rate hospitals on how well they treat emergency room heart attacks.

"When we survey doctors, we request that they list five hospitals in their specialty for patients with difficult or complicated cases, regardless or location or expense," Comarow says.

Difficult or complicated cases can be procedures such as heart transplants, bypass surgery or implanting pacemakers.

In ranking hospitals for these specialty heart disease treatments, U.S. News does consider a few other criteria.

The magazine looks at the number of procedures performed, deaths in the hospital related to those procedures, and quality-of-care measures such as the nurse-to-patient ratio and the number of key technologies in use.

"I think any indicator or ranking has to take into consideration multiple facets of that hospitals care," says cardiologist Howard Hermann of the University of Pennsylvania.

The U.S. News heart hospital rankings may be a useful ranking if you're specifically interested in knowing how well a hospital does on one of the specialty treatments, Hermann says. But it doesn't break down the outcomes for each procedure.

The Yale analysis would be more useful if you wanted to know how well a given hospital keeps emergency room heart attack patients alive.

"And so no single indicator or ranking of a hospital is going to tell you everything you need to know about that hospital," Hermann says.

"The real reasons you do this is so that hospitals and clinicians and everyone involved in health care can take a long, hard look at what they do," he says. "They can compare and figure out what they can do better."

And, he says, that's the real value of report cards. 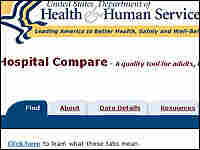 Medicare has just launched a Web site that allows users to compare U.S. hospitals. Called "Hospital Compare," the Web site looks at how often a hospital provides recommended care to patients being treated for heart attack or heart failure. The measures are based on data from patient records collected since 2004.

I gave the site a test drive, opting to compare hospitals in the Washington, D.C., metropolitan area. I restricted the search to a 10-mile limit and selected information regarding heart attacks. But the Web site doesn't give an overall rating for heart attacks to allow for broad comparisons among hospitals. Instead, each hospital is given eight separate ratings. Those measures of care are known to be effective for most adults who've had a heart attack.

Taking aspirin as soon as symptoms of a heart attack begin is thought to help reduce the severity of the attack. Medicare reports that 92 percent of heart attack patients in the United States are given aspirin within 24 hours of arrival. The hospitals I selected in Washington, D.C., reported a range of 94 percent to 98 percent of patients. With percentages this high, comparisons aren't really useful.

Some of the most effective procedures to open a blocked blood vessel, increase blood flow, and prevent further damage to the heart are called percutaneous coronary interventions (PCI). The three procedures commonly referred to as PCI are angioplasty (a balloon is inserted via a catheter and inflated to widen a constricted blood vessel), stenting (a small wire tube is placed in the blood vessel to hold it open), and atherectomy (a blade or laser removes the blockage).

The hospitals I selected had treated fewer than 25 eligible patients – not enough to reliably predict hospital performance. But by clicking on a link to a table, I could see the actual numbers of patients treated with PCI per hospital.

Death rates are given within 30 days of hospital admission for heart attack or heart failure. Thirty days is the time period when deaths are most likely to be related to the care patients received in the hospital. These rates include deaths while still in the hospital or after discharge.

However, for the vast majority of hospitals (4,453 out of 4,477), rates are no different from the national average. Unless you happen to be looking at one of the 24 hospitals in the country that are above or below the national average, this option doesn't really help a person choose between hospitals.

Johns Hopkins Medicine said in a statement that Medicare's Hospital Care Web site is a good first step, although "data is restricted to Medicare patients only, ages 65 and older, and conclusions specific to this group alone may not apply to the general population."

Dr. Howard Herrmann, a cardiology director at the University of Pennsylvania, stresses that the most important thing for heart attack victims is to get to medical care as quickly as possible. That means choosing the closest hospital.

He says the site does help identify the small number of problem hospitals. But he says the site has a far more useful service. By publishing performance statistics, Medicare is publicly holding hospitals accountable and putting pressure on them to improve.