Accessibility links
Woody Guthrie's Fertile Month on the Columbia River In May 1941, folk singer Woody Guthrie was hired by the federal government to travel up the Columbia River in the Pacific Northwest and write about what he saw. Among the 26 songs Guthrie penned that month are "Roll On Columbia" and "Grand Coulee Dam." 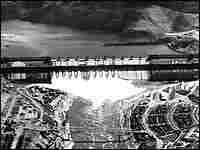 An aerial shot of the Grand Coulee Dam fro June 14, 1941. Woody Guthrie wrote songs about the partially completed dam in May 1941. hide caption 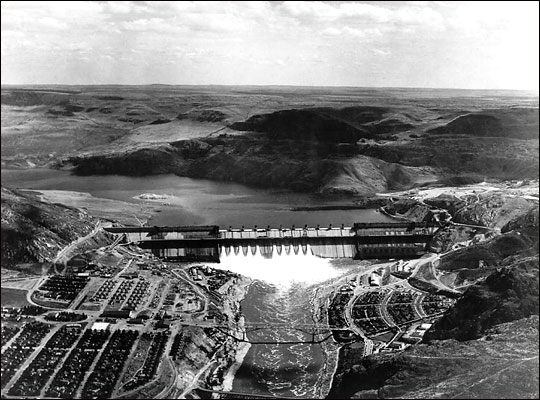 In his month along the Columbia River in May of 1941, Woody Guthrie wrote several songs about the Grand Coulee Dam. 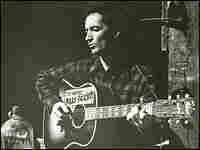 Woody Guthrie was hired by the U.S. government in 1941 to tour the Columbia River and write songs. Woody Guthrie Foundation and Archives hide caption

Hear three of the 26 songs Guthrie wrote and recorded during his month along the Columbia River in May 1941. 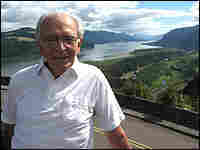 Elmer Buehler was Woody Guthrie's driver during the singer's 1941 trip along the Columbia River. hide caption

In May 1941, folk singer Woody Guthrie spent one month working for the federal government. His job was to travel to the Pacific Northwest and write songs promoting huge hydroelectric dams on the Columbia River.

The government faced powerful opposition from private utilities and hoped that folk songs would prompt more public support. Out of this month of work came some of Guthrie's best-known songs.

Elmer Buehler, now 96 years old, was appointed Guthrie's driver and guide for the month. Buehler remembers the day Guthrie, not yet a folk-music legend, auditioned for Paul Raver at the Bonneville Power Administration.

"He sat there on the administrator's desk," Buehler recalls, "and strummed on his 'gee-tar,' as he always said. I don't think he was there over half an hour and Dr. Raver said, 'Well, you're hired.'"

Raver paid Guthrie $266.66. When the month was over, the folk singer had written 26 songs, among them "Roll on Columbia," "Grand Coulee Dam" and "Pastures of Plenty." Guthrie recorded a few of the tunes in the basement of the agency's headquarters.

"Roll On Columbia" was written after Guthrie had seen the Bonneville Dam, 40 miles east of Portland. Sixty-six years later, white water still rushes through the hydroelectric generators in the dam, creating enough power for entire towns.

Buehler says he drove Guthrie there in a brand new 1941 Hudson Hornet. It was just one of many stops they made that month.

"He got to see that Eastern Washington country," Buehler says, "thousands of acres of land with nothing but sage brush and jack rabbits and stuff like that. And now it's the greatest farmland you think of because they've got water. They put in reservoirs."

Songs for the People

Guthrie's songs echoed this optimistic period in the West. Few were thinking of the salmon the dams would sacrifice. Instead, it was all about harnessing nature's power to help people.

Bill Murlin is a folk singer and former Bonneville employee who took a special interest in Guthrie's time with the agency.

Murlin says it's clear Guthrie was struck by the beauty of the Pacific Northwest.

"Just majestic lyrics, describing what he saw, 'In the misty, crystal glitter of that wild and windward spray,'" says Murlin, quoting a line from Guthrie's "Grand Coulee Dam."

Murlin says the lyrics also show Guthrie's political leanings. There's much talk about how irrigation, shipping and electricity would help the common man.

Buehler says he saw evidence of that same concern for the average person when the head of a local chamber of commerce asked Guthrie to perform at a function.

But Buehler says Guthrie was willing to play for less-fortunate folks. He remembers a hotel lobby in the small, blue-collar port town of Arlington, Ore. Buehler says much of the town turned out for an impromptu concert; Guthrie played for them until nearly midnight.

Guthrie died 26 years after his Columbia River experience. He was only 55 years old and suffered from Huntington's Disease. Every year in his hometown of Okemah, Okla., residents hold a folk festival that bears his name.