Accessibility links
Potter Publisher Predicted Literary Magic One the eve of the release of the seventh and final Harry Potter book, the Scholastic editor who brought Harry Potter to the U.S. looks back on a lucky find that he knew would make literary magic. 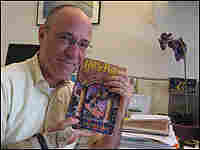 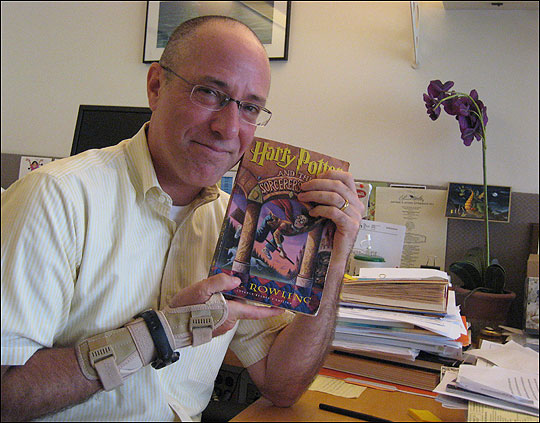 Children's book editor Arthur A. Levine holds a galley copy of the first U.S. Harry Potter book. He discovered Harry Potter at a book fair in Bologna, Spain, in 1997.

For Arthur A. Levine, the veteran children's book editor who brought Harry Potter to the U.S., discovering his star subject required some gentle prodding.

Levine was at a children's book fair in Bologna, Italy, in 1997 looking for international authors he could bring home, but nothing was clicking.

Finally, after describing his ideal book to a representative from the English publisher Bloomsbury, she made a reluctant offering.

"She sort of bit her lip, and said "I do have one thing ... and we don't even control the rights. You will have to go to the agent, and it is fantasy — I know that people aren't really reading fantasy,'" Levine recalls.

Levine brought his galley copy of Harry Potter and the Philosopher's Stone home and fell in love.

As the storm builds over the upcoming release of the seventh and final Harry Potter book — some 12 million copies published in the U.S. alone — Levine says he realized at the time that Harry Potter would be something special.

Levine is known in the industry for his gift of finding great children's writers. He discovered Phillip Pullman's trilogy that starts with The Golden Compass, and he has been the first to recognize many other important children's books. Levine says that when he started his own imprint at Scholastic in 1997, he wanted to find books that would create the same powerful emotional response that he remembered from his own childhood.

His galley copy of Harry Potter met those requirements. In fact, he was so confident that the book would soar that he included a letter in the initial review copies predicting that the first editions would be extremely valuable in future years.

Scholastic is now a $2 billion company, and Harry Potter, represents about 8 percent of the revenue. But for Levine, choosing potential winners isn't about the money, it's about gut instinct and finding the kinds of powerful, emotional stories he remembers reading as a child.

"I am just aware of how I feel and how I am reacting — am I laughing? Am I moved? Am I bored?, he says. "I am just being a reader, and I trust that if my response is strong enough and powerful enough that other people will have that response."