Accessibility links
Bush Defiant, But Restrained With Press President Bush strongly defended his Iraq strategy, saying Congress has no business micromanaging the war. Even so, he was more restrained with the press during a White House news conference.

President Bush strongly defended his Iraq strategy, saying Congress has no business micromanaging the war. Even so, he was more restrained with the press during a White House news conference.

NPR's David Greene was in the hour-long session with the president.

DAVID GREENE: One of the first questions for the president came from Terry Hunt of the Associated Press. He brought up how lawmakers are abandoning the president's war policy.

GREENE: And Hunt asked how the president was trying to keep Republicans with him. Mr. Bush responded calmly.

GEORGE W: I presume you're referring to friends of mine like Lugar, Senator Lugar, Domenici?

BUSH: These are good, honorable people. I've spoken to them and I listened very carefully to what they have to say.

GREENE: Wendell Goler from Fox News stayed on Iraq and asked about some of the criticisms of the president. Shouldn't he have sent more troops from the beginning? Didn't he misjudge the level of violence? And shouldn't Mr. Bush have put more pressure on the Iraqi government? Goler finished with this...

WENDELL: Why should the American people feel you have the visions for victory in Iraq, sir?

BUSH: Those are all legitimate questions that I'm sure historians will analyze.

GREENE: Here he was talking about the conviction of former White House aide Lewis Libby.

BUSH: It has been a tough issue for a lot of people in the White House and it's - it's run its course and now we're going to move on.

GREENE: He called on one reporter, then the next, until there was some confusion.

BUSH: No, not you. Michael.

BUSH: Like the new hall - I should have been more gentle?

BUSH: Do we ever use kinder and gentler? No.

GREENE: He was suggesting that perhaps the newly renovated press briefing room was bringing out a different side of him, maybe gentle, maybe just more reflective. He was asked about his political troubles and he actually sounded like he was soul-searching.

BUSH: You know, I guess I'm like any other, you know, political figure - everybody wants to be loved, just sometimes the decisions you make and the consequences don't enable you to be loved. And so when it's all said and done, Ed, when you ever come down and visit the old, old tired me down there in Crawford, I will be able to say I looked in the mirror and made decisions based upon principle, not based upon politics. And that's important to me. Thank you all for you time. I loved being here at this new building. Thank you.

MARTHA RADDATZ: Can we talk to you about the al-Qaida intelligence report, please?

GREENE: Please? Even please from a reporter would rarely get the president to come back and take more questions, but this time...

BUSH: What was that? This is amazing.

RADDATZ: I know, I know.

BUSH: The new me. The al-Qaida intelligence report.

GREENE: The question was about a new government report suggesting al-Qaida is growing in strength. Mr. Bush said his government is on top of it.

BUSH: We're working to make sure that we continue to keep the pressure on al-Qaida, but no question, al-Qaida is dangerous.

GREENE: And that was the last question. In fact, Mr. Bush warned this whole business of taking an extra question wouldn't last.

BUSH: I mean this is just like an aberration; in other words...

RADDATZ: It's over next time.

MONTAGNE: And you can hear more highlights from President Bush's news conference and NPR's special coverage at npr.org. You'll also find a summary of the White House's report card on Iraq. 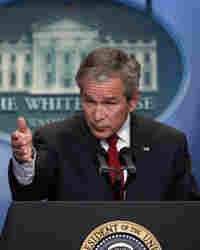 Congress required President Bush to submit an initial report to lawmakers assessing whether the Iraqi government has made satisfactory progress toward achieving the benchmarks set for it. Read an assessment of progress described in the Bush administration's report.

Responding to Hearst's Helen Thomas, Who Said 'Mr. President, You Started This War'

On the Links Between Al-Qaida in Iraq, Osama Bin Laden and the Sept. 11 Hijackers

On Whether He Still Has Confidence in Iraqi Lawmakers

On His Decision to Commute I. Lewis 'Scooter' Libby's Prison Sentence, and Putting the Issue to Rest 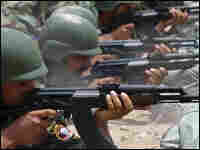 Iraqi police cadets train at a firing range in a training base in the Iraqi town of Hilla, central Iraq, on July 9, 2007. Mohammed Sawaf/AFP/Getty Images hide caption 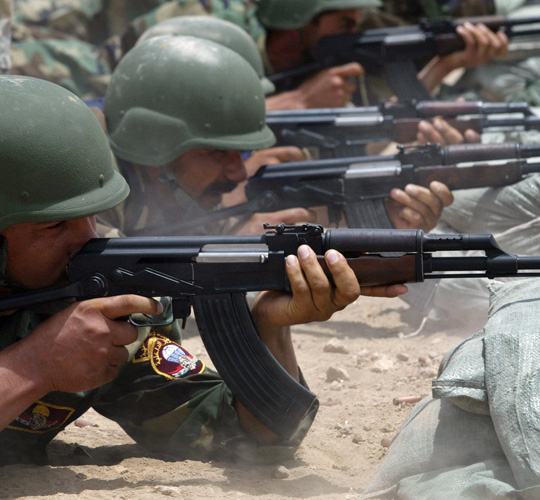 Iraqi police cadets train at a firing range in a training base in the Iraqi town of Hilla, central Iraq, on July 9, 2007.

President Bush's pleas for patience on Iraq were rebuffed by House Democrats, who voted along party lines to approve a troop-withdrawal measure. The vote came after a White House report found limited progress toward Iraqi government benchmarks.

Earlier Thursday, the president defended progress in Iraq and pleaded for more time as the White House issued a report acknowledging that the Baghdad government has failed to meet many of the benchmarks laid down by Congress.

"We can report that satisfactory progress is being made in eight areas," Mr. Bush told reporters at the White House. "In eight other areas, the Iraqis have much more work to do."

The House withdrawal measure, which passed by a vote of 223-201, would require U.S. forces to be out of Iraq by next April.

It prompted some highly charged partisan debate. Georgia Republican Tom Price said the bill was nothing but political pandering by Democrats.

"Clearly, this bill was not written in response to what our generals think, whose interim report was released just hours ago," Price said. "Instead, it was written in reaction to polls and to pressure from moveon.org. And others."

But Georgia Democrat John Lewis said the measure was a step that would, as he put it, "end the madness in Iraq."

"How many more of our young people must die before we realize enough is enough," Lewis said. "One more day, our involvement — it's too many. One more death is one too many. This war is not worthy of another drop of human blood."

The Senate is expected to vote next week on a similar measure, but it is unlikely to survive. And if it were to reach the White House, it faces a certain veto by the president.

Mr. Bush said the newly released report had been completed less than a month after the final reinforcements in the so-called troop surge had arrived in country.

He said he understood that Americans were experiencing fatigue over an "ugly war," but that the course in Iraq needed to play out.

"The Iraqis do not want U.S. troops patrolling their cities forever, any more than the American people do," he said.

Bush said he would withdraw troops when the time is right, "not because pollsters say it will be good politics."

Overall, the much-anticipated White House report on Iraq found that the U.S.-backed government in Baghdad has not achieved any of the major goals considered necessary to quelling sectarian violence in the region, such as passing legislation to divide the nation's oil revenues.

While the president was fielding questions at a White House news conference, Senate Majority Leader Harry Reid (D-NV) issued a statement saying the president needs to admit that his "Iraq policy has failed."

"It is time for the president to listen to the American people and do what is necessary to protect this nation," he said.

The White House assessment also comes as GOP support for the Bush policy in Iraq is in jeopardy, with Sens. Richard Lugar (R-IN), Pete Domenici (R-NM) and several other Republicans saying they want the president to begin reducing the U.S. military role in Iraq.

But House Republican leader John Boehner of Ohio, standing firm with the president, called the Senate defectors "wimps" on Wednesday in a private meeting with rank-and-file Republicans.

Shoring up GOP support has become critical for the White House as public opinion polls chart ever-deepening opposition to the war and a climbing U.S. casualty count 16 months before the 2008 elections.

Democrats say the findings in the report are proof the war effort is failing, while most Republicans say the limited progress shows hope and that lawmakers should not lose faith.

Boehner "wimps" remark ironically came at nearly the same moment that several GOP senators beseeched the White House without apparent success for a quick change in course on Iraq.

Domenici and several other GOP members, including Sen. George Voinovich of Ohio, say they want Bush to begin reducing the military's role in Iraq. In the meeting, Hadley said Bush wants to wait until September when Gen. David Petraeus, the Iraq war commander, will reassess military progress.

Emboldened by the Republican divide, Democrats called for a vote on legislation to end U.S. combat operations next year. The House planned to vote first on Thursday.

Petraeus plan to work, and that too much is at stake for Congress to renege on its commitment now by approving what can only be described as another partisan stunt by Democrats."