A Chicago jury found Canadian media magnate Conrad Black guilty on several criminal fraud charges. Black and three other executives at Hollinger International had been accused of swindling shareholders out of more than $60 million. A federal grand jury in Chicago indicted Black and three former associates two years ago, on fraud and other charges. They say that Black and his associates kept payments for themselves that should have gone to Hollinger and its investors. Black was accused of using the company plane to fly himself and his wife on a vacation, and ordering Hollinger to pay $40,000 of a $62,000 birthday party for his wife in New York. 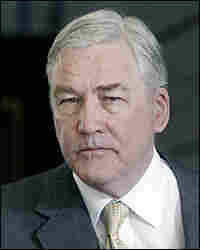 A federal jury convicted fallen media tycoon Conrad Black and three of his former executives at Hollinger International Inc. Friday of illegally pocketing money that should have gone to stockholders.

Black, 62, was convicted of three counts of mail fraud and one count of obstruction of justice. He faces a maximum of 35 years in prison for the offenses, plus a maximum penalty of $1 million.

He was acquitted of nine other counts, including racketeering and misuse of corporate perks, such as taking the company plane on a vacation to Bora Bora and billing shareholders $40,000 for his wife's birthday party.

Black, sitting at a table with his attorneys, did not show any emotion when the verdict was read. After U.S. District Judge Amy St. Eve briefly adjourned the court, his wife, Barbara Amiel Black, and his daughter, Alana, leaned over to console him.

While the verdict was mixed, the conviction signaled an increasing trend of aggressive U.S. government pursuit of senior corporate executives, following the Enron, Tyco and WorldCom scandals, and to hold top executives personally accountable for their companies' actions.

Black's three co-defendants were all found guilty of three counts of mail fraud. They are former Hollinger International vice presidents John Boultbee, 64, of Vancouver and Peter Y. Atkinson, 60, of Toronto and attorney Mark Kipnis, 59, of Chicago. They face up to 15 years in prison and fines of up to $750,000.

Hollinger International once owned community papers across the United States and Canada as well as the Chicago Sun-Times, the Toronto-based National Post, The Daily Telegraph of London and Israel's Jerusalem Post. The Sun-Times is the only large paper remaining at the company whose name has been changed to Sun-Times News Group.

The heart of the case against the husky, silver-haired publishing millionaire focused on a large-scale selloff starting in 1998 of Hollinger community papers that were published across the United States and Canada.

Companies that bought newspapers in seven such deals paid millions of dollars to Hollinger International, with headquarters in Chicago, in return for promises it would not go into competition with the new owners.

Black was charged with illegally diverting millions of dollars in those so-called non-compete payments to himself, Boultbee, Atkinson and the longtime No. 2 man in the Hollinger International empire, F. David Radler.

Black was convicted on three counts of those allegations made by prosecutors. The obstruction of justice charge was considered the most likely of all to net a conviction because Black was captured on videotape removing 13 boxes of documents from his Toronto offices, despite a court ban on taking away potential evidence.

Some of the non-compete payments also went to a smaller Toronto corporation, Hollinger Inc., which was controlled by Black and in turn owned a controlling interest in the Chicago-based Hollinger International.

Radler pleaded guilty to fraud and agreed to testify in exchange for a lenient 29-month sentence. In eight days on the witness stand, he contradicted Black's argument that he knew little about the deals that led to the non-compete payments because he was busy with other matters.

Black's attorneys painted Radler as a liar looking for a good deal from prosecutors in his own case.