Accessibility links
Iowa Farmers Look to Trap Carbon in Soil Power plants and cars may be the main sources of the greenhouse gas carbon dioxide. But farmers have also released huge amounts of CO2, just by plowing their fields. Now, some Iowa farmers are abandoning plowing for practices that maintain — and even return — carbon in the soil. 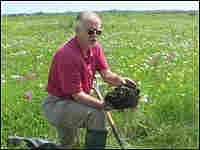 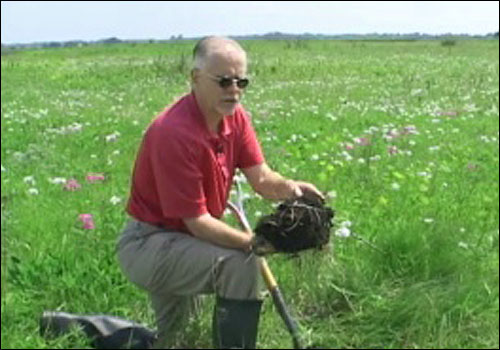 We all know the main sources of greenhouse gases: power plants, cars, burning forests and yes, your lawn mower.

But dirt? It's true. Farmers have released huge amounts of carbon dioxide, the major greenhouse gas, just by plowing their fields.

If you need proof, says soil scientist Lee Burras of Iowa State University, just head for one of the remaining patches of undisturbed American prairie.

Take, for example, Doolittle Prairie near Story City, Iowa. Amid a sprinkling of wildflowers and the calls of red-winged blackbirds, Burras plunges a spade into the soil, cutting through the web of grass roots. Then, on his knees, he lifts out a clump of soil.

"The first thing I notice is how black it is," Burras says. "Beautifully black."

Indeed, the soil is black like coal, or oil, or charcoal, because it's also full of carbon organic carbon, or humus, Burras calls it. It is what's left from countless generations of rotting plants.

But exposing that humus to the sun and oxygen also begins to destroy it. Microbes in the soil are going to work on the humus, eating it and breathing out carbon dioxide, as if they were burning up the soil.

This is what happens when farmers till the land.

The Downfall of Plowing

"The tearing of the soil, introducing oxygen that's what tillage is all about," Burras says. "The history of civilization is tillage. I believe it was Daniel Webster who said, 'Where tillage begins, other arts follow.'"

But tillage also changes the land. Burras walks 100 feet east, out of the grass and into a field planted with soybeans. Here, once again, he turns over some soil.

"One of the most striking differences, as we look at this, is that the field is a little grayer, not quite as black," he says. "That reflects the past century of plowing and such. We've seen the organic carbon content of the field go from 5 percent to about 3 percent."

It may not seem like much, but it means that over the past 100 years, every acre of this field has vented about 50 tons of carbon dioxide into the atmosphere. That's about as much as eight average cars pump out in a year.

Of course, there are billions of acres of farmland around the globe. Rattan Lal, a soil scientist at Ohio State University, has traveled the world to study those fields, trying to calculate how much carbon farmers have unleashed.

"From time immemorial when world agriculture began, we have lost roughly 140 billion tons of carbon from trees and soil," he said to an audience on Capitol Hill in Washington, D.C. Over half of that, almost 80 billions tons, is from the soil alone. In fact, up until the late 1950s, plowing had released more carbon dioxide into the air than all the burning of coal and oil in history.

That's the bad news. The good news is farmers are finding ways to recapture some of that carbon. They could even help slow global warming. You could call it "carbon farming."

There are many ways to add carbon to the soil. The most popular is called no-till farming. It involves planting without plowing. A no-till planter has sharp steel wheels that cut right through the debris from last year's crop, opening up a narrow slit in the soil; seeds drop through a tube into the opening, then a wheel comes along and closes it up again. Because it doesn't stir up the soil, it lets the land keep its stored carbon and even adds some, because those corn stalks on the surface gradually become part of the soil.

By some calculations although there's some scientific argument over this each acre of no-till land in Iowa captures about a ton of carbon dioxide from the air each year. At that rate, a six-acre cornfield inhales about as much of this greenhouse gas as the average American car exhales.

Farmers can also add carbon-rich compost to the soil, and plant "cover crops" such as rye or vetch during parts of the year when land otherwise would lie idle. Both are standard practices in organic farming.

The best way to raise a big carbon crop, though, is to do what Russell Hughes did on part of his farm in Searsboro, Iowa. He stopped growing corn and soybeans on part of his farm and turned it into pasture for cattle. Grass and clover covers this ground year-round; the roots grow deep.

"In a small respect, you're going back closer to what the prairie was doing when it was here," Hughes says. "As long as you have roots down there that are holding the soil, you're adding a little bit all the time."

Carbon as a Solution

The potential impact of carbon farming is enormous. According to Rattan Lal, from Ohio State, American soil could in theory, at least soak up more than 100 million tons of carbon each year, enough to offset the emissions from half of the cars in the country.

"If we want to kick the carbon habit, as our president has asked, then agriculture is an important part of the solution to rehabilitating our carbon civilization," he says.

And the real beauty of this, he says, is that many of these carbon-trapping practices cost very little. Often, they're even profitable. And farming this way helps the environment in other ways; the land becomes more of a sponge for water and less soil and fertilizer washes into nearby streams.

There are, of course, many complications before this will happen. Farmers grow crops that they can see and sell, not something invisible and hard to measure, like carbon in the ground. And scientists are still arguing about how much carbon some of these farming practices actually capture.

In a small way, though, carbon farming has begun. Under a program run by the Iowa Farm Bureau, almost 2,000 farmers are getting paid a few dollars for every acre of no-till land or pasture. The money comes from businesses that are trying to balance their greenhouse gas emissions. Right now, those businesses aren't paying a lot, but that could change, if Congress passes strict limits on greenhouse gas emissions. Then, farmers might actually earn some real money by capturing carbon and storing it in their land.