Accessibility links
Gates, Rice Try to Firm Support for War on Terror Senior officials have been deployed by the Bush administration to plead for more time for a troop surge to show results, after Congress voted in favor of a U.S. troop withdrawal from Iraq. But two Republican senators have introduced a bill calling for a pullout.

Gates, Rice Try to Firm Support for War on Terror

Gates, Rice Try to Firm Support for War on Terror

The Bush administration on Friday launched a campaign to shore up support for the war on terror, a day after Congress handed the president a stinging rebuke by voting in favor of a U.S. troop withdrawal from Iraq.

Defense Secretary Robert Gates said al-Qaida has become a "franchise organization" and that it was gaining a foothold in North Africa. Secretary of State Condoleezza Rice, meanwhile, echoed the administration's call for more time to see results from the troop surge in Iraq.

But soon after those comments were made, two of President Bush's fellow Republicans in the Senate urged him to draft plans to begin a possible troop withdrawal by the end of the year.

The proposal from Sens. John Warner (R-VA) and Richard Lugar (R-IN) would leave it up to the president to order any pullout of troops. But it underscores the growing bipartisan opposition in Congress to the increasingly unpopular war.

Friday, the administration sought to deflect attention away from the Iraqi government's struggles and toward the United States' need to fight terrorism — in Iraq and elsewhere.

At a news conference with Gen. William Pace, the chairman of the Joint Chiefs of Staff, Secretary Gates also told journalists that following the ouster of the Taliban in 2002, Osama bin Laden and his lieutenants had been forced to operate in "primitive conditions," which had precluded "the kind of centralized control they had before 9/11."

As a result, al-Qaida units around the world had been forced to work semiautonomously, while continuing to receive strategic guidance from Osama bin Laden and his lieutenants.

The attempt to clarify Washington's thinking on the terrorist network came a day after President Bush disputed media characterizations that a U.S. intelligence report indicated that al-Qaida was "stronger than ever" and the House voted for a withdrawal of U.S. troops from Iraq beginning in April.

After the 223-201 vote for a Democratic proposal to force a U.S. troop withdrawal by next spring, Rice acknowledged in a round of television interviews that Prime Minister Nouri al-Maliki's government has not achieved "as much progress as we would like."

The White House took the position that the House vote shows, "we have at least a cohesive position on our side for now," said the deputy press secretary.

"We are under no illusion, and we're very clear-eyed about the fact that we have a lot of work to do to talk to members of Congress, hear what they have to say," White House spokesperson Dana Perino said Friday.

Rice on Friday exhorted congressional critics of Iraq war policy Friday to give the Bush administration and the fledgling government in Baghdad until September to "make a coherent judgment of where we are."

"We shouldn't just dismiss as inconsequential the progress that they have made," she argued.

Rice echoed a more conciliatory tone adopted by the president in recent weeks, acknowledging what Bush on Thursday called "war fatigue" among the public.

Maj. Gen. Benjamin R. Mixon, a top U.S. commander in Iraq, told Pentagon reporters via a video linkup from Iraq that "there will be consequences" if U.S. troops are withdrawn too soon.

"With the support of the American people, I'm convinced that we can continue to make progress," he said.

"What troubles me about this debate - and it is important and it needs to be debated, for sure - is it seems to me that we should first decide what we want the end state to be in Iraq ... and determine how we can reach that end state and how much time it will take," added Mixon, who commands troops in northern Iraq, including the violent Diyala province.

He enumerated several military successes - the number of militants captured, weapons caches seized, terrain retaken and so on. But he also acknowledged that much work remains.

Congressional Democrats, saying the war was draining U.S. assets from the fight against al-Qaida, moved Friday to highlight what they see as a major failure in Bush's war on terror: the inability to bring bin Laden to justice.

The Senate voted 87-1 in favor of doubling the reward to $50 million for information leading to his capture. The bill also would require regular classified reports from the administration explaining what steps it's taking to find bin Laden. 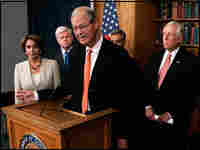 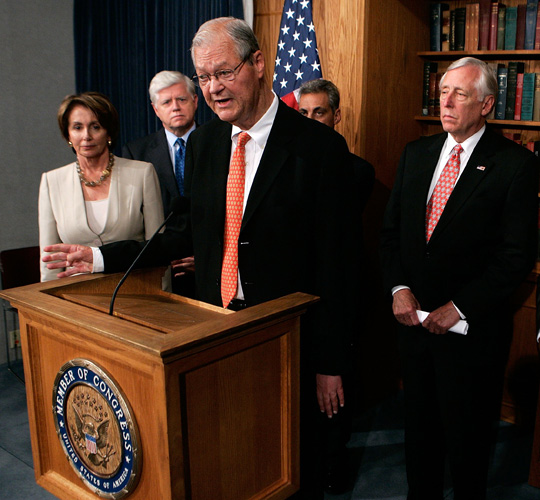 Congress required President Bush to submit an initial report to lawmakers assessing whether the Iraqi government has made satisfactory progress toward achieving the benchmarks set for it. Read an assessment of progress described in the Bush administration's report.

Rep. James Moran (D-VA) said the measure was necessary because the current policy in Iraq is "leading us down a dead-end street."

Republican Marsha Blackburn of Tennessee said the vote sends the message that the U.S. "is weak in the war on terror."

The vote was mostly along party lines. Only four Republicans voted for it and ten Democrats opposed it.

The Senate is expected to vote next week on a similar measure, but it is unlikely to survive. And if it were to reach the White House, it faces a certain veto by President Bush.

Earlier Thursday, the president defended progress in Iraq and pleaded for more time.

Mr. Bush said trying to run a war through resolution was a prescription for failure.

"I'll work with Congress. I'll listen to Congress. Congress has got all the right to appropriate money, but the idea of telling our military how to conduct operations, for example, or how to, you know, deal with troop strength is, it's, I don't think it makes sense," he said.

In the House, the measure calling for withdrawal prompted charged partisan debate. Georgia Republican Tom Price said the bill was nothing but political pandering by Democrats.

"Clearly, this bill was not written in response to what our generals think, whose interim report was released just hours ago," Price said. "Instead, it was written in reaction to polls and to pressure from moveon.org. And others."

But Georgia Democrat John Lewis said the measure was a step that would, as he put it, "end the madness in Iraq."

"How many more of our young people must die before we realize enough is enough," Lewis said. "One more day, our involvement — it's too many. One more death is one too many. This war is not worthy of another drop of human blood."

The report released by the White House Thursday cited measured progress on the economic front in Iraq. "Unemployment has eased slightly and inflation is currently abating," the report

said. It omitted mention of a June 1 Pentagon report estimating an annual inflation rate at 33 percent and the Iraqi government estimate of joblessness at 17 percent.

In an evident jab at critics of Bush's war policies, the report also said progress toward political reconciliation was hampered by "increasing concern among Iraqi political leaders that the United States may not have a long term-commitment to Iraq."

Despite rising pressure from Republicans in Congress for a change in course, Bush was adamant.

"When we start drawing down our forces in Iraq, it will (be) because our military commanders say the conditions on the ground are right, not because pollsters say it'll be good politics," he said.