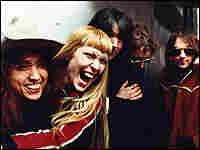 "The Hurt's All Gone"

Modern-day garage-rock bands often perform with an ear for the old-fashioned. But The Detroit Cobras' members don't just draw inspiration from the raw sounds of early rock 'n' roll: They've spent the last decade or so plucking their actual songs from the genre's dustiest margins.

The Detroit Cobras' new CD, Tied & True, features tunes made famous in the '60s by the likes of Bettye LaVette, Art Neville, The Flirtations and Irma Thomas, who was a major hero of singer and pianist Rachel Nagy. And while The Beatles covered one of these tracks, "Leave My Kitten Alone," the styles and sounds here have little to do with early rock and pop's standards.

Nagy and guitarist Mary Ramirez recently sat down to discuss their many musical influences, as well as the factors that go into The Detroit Cobras' song selection.