Accessibility links
Istanbul's Tarlabasi Under Constant Transformation In what was once the capital of the Ottoman Empire, one of Istanbul's most notorious slums has sprung up. Tarlabasi is a densely populated maze of narrow streets that wend between crumbling Ottoman-era houses built on a hillside.

View an audio gallery of the people of Tarlabasi. hide caption 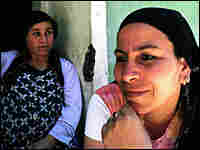 Kurdish housewives sit on the doorstep in an attempt to escape the summer heat. Paxton Winters hide caption

Waves of migration from the Turkish countryside have swelled Istanbul's population to more than 12 million people, making it one of the world's megacities. Economic migrants have overwhelmed the city's infrastructure and services.

And in what was once the capital of the Ottoman Empire, one of Istanbul's most notorious slums has spung up.

Tarlabasi is a densely populated maze of narrow streets that wend between crumbling Ottoman-era houses built on a hillside.

It's located right next to the commercial and cultural heart of Istanbul and, yet, most Turks consider Tarlabasi a no-go zone.

It's here, on a crumbling, graffiti-lined street that Souad Calbay runs the Benahol Laundry Shop out of the ground floor of a once-grand 19th-century building.

In Kurdish, Behahol means "everything is all right." But that's not how Calbay says he feels these days. He presses one shirt after another with a rusting iron.

"Everything happens here," Calbay says. "There's thieves outside here every day. There's fights out that happen on the street. And every day they're selling drugs here on the streets."

Calbay is an ethnic Kurd. Like hundreds of thousands of other Kurds, he fled to Istanbul in the 1990s to escape the grinding poverty and bloody conflict in southeastern Turkey, where Turkish security forces have battled Kurdish separatists off and on since the 1980s.

Calbay's customers are almost all young, male Kurds from the Southeast. They cram into cheap single-room apartments in Tarlabasi. Because many don't have bathrooms, they pay to use the showers in the basement of Calbay's shop.

Many of these young migrants don't find work here – and end up like this 19-year-old, who calls himself Fuad, dealing and doing drugs in the neighborhood's back streets.

Fuad and several of his teenage friends take turns smoking hashish in the filthy one-room apartment where up to 12 young men sleep every night.

Until the 1950s, this was a prosperous neighborhood inhabited by Greeks and Armenians. But a series of pogroms and discriminatory government policies led to the forced departure of most of Istanbul's Christian residents.

Anna Maria Gelmayden Pertan is one of the few thousand ethnic Greeks still living in Istanbul.

"This house is a typical Greek townhouse of the 19th century," Pertan says. "It was built by my great-grandfather, Dmitri Kurteli."

Pertan's carefully maintained family home is a magnificent five-story building filled with Antigue icons. Standing just across the street are similar houses that now serve as brothels on Tarlabasi Boulevard.

"I must confess that I don't really go down to that part of the town very often," Pertan says. "Well, three times thieves fell upon me and tried to steal my wallet."

Most of the Ottoman-era buildings in Tarlabasi were abandoned during the Greek exodus. In time, Pertan says, the neighborhood became a squatter's paradise.

"When you walk down in Tarlabasi — when you go to the market on a Sunday — you don't hear Turkish spoken at all. It's either Kurdish or Arabic," Pertan says. "And they all wear their own national costumes and sit in the street, so you think, really, that you're in an Anatolian village. Nothing to do with the 19th-century elegant Greeks."

In the weekly outdoor bazaar in Tarlabasi, rural life raucously collides with the modern urban world.

Here, less than a mile from Istanbul's five-star hotels, child shepherds herd flocks of sheep through the streets as Kurdish women in bright floral headscarves shop for fruit and cheap Chinese-made cosmetics alongside trembling, teenage glue-sniffers and illegal African immigrants.

Tarlabasi's cheap housing has attracted poor migrants from across the developing world. And that includes refugees from the conflict raging in neighboring Iraq.

Nissam Koryal Danyal is an Iraqi Christian who fled with his family to Turkey last year after he narrowly survived a daylight carjacking in Baghdad.

Today, Danyal serves food seven days a week in a working-class cafeteria next to the Tarlabasi street bazaar — making just enough money to pay rent as he waits for the United Nations to process his application for asylum in the West.

Of the many communities that have sought shelter in Tarlabasi, perhaps the most incongruous are the transvestites.

"All the people comes for sex to Tarlabasi," says Michelle Kurts, a tall, bleached-blond transvestite who works at a nightclub on Tarlabasi Boulevard. "You know Tarlabasi is the sex center of Istanbul city."

Kurt takes walks down a trash-strewn alley toward some transvestites who live and work here as prostitutes because, she says, they are unwelcome and persecuted in other parts of the city.

Tarlabasi's days as a lawless haven for society's outcasts may be coming to an end. After decades of neglect, the city government has announced plans to force out squatters and renovate hundreds of old houses.

One police officer said that after years of swatting at mosquitoes, the swamp will now be drained.

Asu Aksoy, an economist at Istanbul Bilgi University, says this gentrification plan is motivated by the real-estate boom that's rapidly transforming the rest of the central Istanbul – not out of concern for Tralabasi's impoverished residents.

"They will have to go to some suburbs, and the problem will be carried somewhere else," Aksoy says.

Rents in Tarlabasi have already started going up and some residents worry that they will soon be forced out. That includes the Roma, or gypsies, whose chaotic, four-day wedding celebrations echo through the neighborhood on hot, summer nights.

For generations, the Roma have lived in Istanbul, many of the performing in the restaurants and bars in the center of the city. During the day, these Roma musicians gather in a coffee shop in Tarlabasi to play cards, watch horse races on TV and wait for their next gig.

A young Roma violinist named Yalcin Bayramic says it would be good for the government to clean up the neighborhood. But, he adds, that means they'll all probably have to leave.