Accessibility links
40 Years On, Newark Re-Examines Painful Riot Past In the summer of 1967, Newark, N. J., exploded into violence. The five days of rioting left 26 people dead and lasting scars that still mark the city to this day. This week, Newark remembers the events of that sweltering July 40 years ago.

AUDIO SLIDESHOW: The Newark Riots, a City in Flames 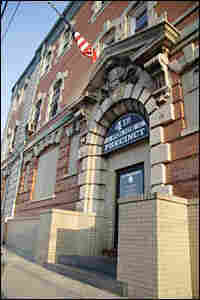 The Fourth Precinct today. In 1967, crowds gathered outside the police station to protest the arrest and beating of a cabdriver. Their anger and frustration helped fuel five days of violent rioting. Nancy Solomon for NPR hide caption

Forty years ago this week, Newark, N.J., erupted into violence.

Newark was one of several cities across the country where riots broke out in the late 1960s. Years of poverty and discrimination had created a powder keg of frustration in many black communities. For Newark, the spark came on the hot summer night of July 12, 1967.

A black cab driver named John Smith was pulled over and badly beaten by the police. It happened within sight of the residents of a large public housing project. After Smith was dragged into the Fourth Precinct station house, an angry crowd quickly gathered outside.

Bob Curvin, an African-American resident of Newark, says that by the time he arrived, there were already a few hundred people milling around. Curvin was a civil-rights organizer at the time. He stood on a car to address the crowd, urging them to march downtown to protest the frequent brutality by the mostly white police force. But the crowd had lost patience with peaceful protests.

"There was a rain of stones, rocks, Molotov cocktails at the precinct," Curvin remembers. "The flames started flickering down the side of the building, and the police came charging out with night sticks, shields, riot gear, charging the crowd."

Chaos on the Streets

Five days of rioting followed. Stores were looted and some were burned down. After a policeman was killed, the governor sent in the National Guard with orders to use their weapons at will.

Reporters Ronnie Watkins and Bob Ortiz of Pacifica Radio followed the Newark police to an area near a hospital, where sporadic gunfire could be heard. "The whole scene is incomprehensible, absurd," they reported.

According to some residents, the National Guard used tanks and armored vehicles to block off streets, keeping many people from entering the city.

Craig Wilson grew up in the Jewish section of Newark and worked at his father's shop, Moe's Dry Goods. It was part of a row of small stores, owned mostly by white merchants, in Newark's black neighborhood, known as the Central Ward. When the riot ended, Wilson returned to the street. He says the area had been devastated.

"All the windows were shattered," he says of the neighborhood shops. "Some were burned out. Everything was stolen." Inexplicably, Wilson's father's store was the only one on the block left untouched.

According to official figures, 26 people died during the riots. More than 700 were injured, and there were 1,500 arrests. A governor's commission found that most of the deaths were caused by police or National Guard rifles.

But the causes of the riot went far deeper than one act of police brutality.

After World War II, whites began moving out of Newark to the suburbs in huge numbers, spurred on by new interstate highways, low-interest mortgages and widespread access to college provided by the G.I. Bill. As blacks moved into the Central Ward, they faced severe discrimination in jobs and housing.

William Linder, a white Catholic priest, came to Newark in 1963 as the city was undergoing these changes.

"Even the rackets were controlled outside our community," he adds.

In the years since the riots, Linder has witnessed a number of changes in the neighborhood. City Hall and the police department are now mostly black-run institutions — but they struggle for the resources to do a good job.

Linder started and still runs a nonprofit organization that built housing and social service centers. It even brought the neighborhood its first supermarket in 25 years. And while home ownership rates are still low, there are owner-occupied homes in the Central Ward, some of them built by Linder's group.

Looking Forward Without Forgetting the Past

Today, outside the Fourth Precinct police station — ground zero for the events of 1967 — Newark's present meets its past.

Now, instead of public housing towers, new townhomes stand across from the police station, offering home-ownership to low-income families. Price points to the front yards and the house numbers as examples of the American narrative arriving in this part of Newark.

"The Fourth Precinct reminds us of a Newark which I believe is part of a past and not a part of the future," Price says.

But Price doesn't want the past forgotten. He thinks the Fourth Precinct should be preserved as a landmark. His colleague, Rutgers sociologist Max Herman, agrees.

Herman is working on a book about the riots. He says that for most of the past 40 years, Newark has tried to ignore its history in favor of a message of renaissance. Herman believes that attitude held the city back, "because there hasn't been an honest airing of what happened in the past."

For the first time, many of the city's institutions are commemorating the riots. Herman is working on an exhibition at the New Jersey Historical Society. Another will be held at a contemporary arts center. The photos, video footage and oral histories will allow Newarkers to relive the riots. And the wide-angle lens that 40 years provides may just allow the kind of truth telling that Herman says the city needs.