Accessibility links
Alaska Senator Scrutinized in Corruption Probe Powerful, often-abrasive Sen. Ted Stevens (R-AK), 83, is enmeshed in a federal corruption probe that has implicated his son Ben. The Justice Department is investigating ties between a fishing co-op that paid Ben Stevens $500,000 and a federal bailout passed by the senator.

Powerful, often-abrasive Sen. Ted Stevens (R-AK), 83, is enmeshed in a federal corruption probe that has implicated his son Ben. The Justice Department is investigating ties between a fishing co-op that paid Ben Stevens $500,000 and a federal bailout passed by the senator. 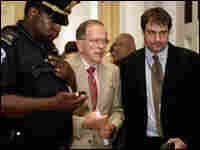 A brisk wind of political scandal is blowing through Alaska. A federal jury has convicted a former state legislator of extortion and bribery. A lobbyist and two business executives have pleaded guilty to corruption charges. Three other former lawmakers are under indictment. Court filings also implicate the son of U.S. Senator Ted Stevens, one of the most powerful figures on Capitol Hill. That raises the big question, whether the probe will reach Ted Stevens himself.

PETER OVERBY: With 37 years in the Senate and a take no prisoners attitude, Ted Stevens has acquired enough clout to get almost anything he wants. But now, that clout is coming under federal scrutiny. Prosecutors subpoenaing documents, FBI agents asking questions, grand juries calling witnesses.

The problem is that many of Ted Stevens' projects benefit not just Alaska, but also his son, Ben. This is the story of one of those projects. Let's start on Capitol Hill.

Senator TED STEVENS (Republican, Alaska): I ask unanimous consent that the Senate proceed with immediate consideration of House Bill 5946, which it has received from the House.

Unidentified Male #1: The clerk will report.

OVERBY: Last December 7th, while most senators were busy elsewhere, Ted Stevens took less than 60 seconds to pass a bill. It became law this January. One provision would reduce southeast Alaska's fleet of salmon fishing boats - seine boats they're called for the type of net they used. Here's the theory; salmon prices are way down. If fewer boats were out there harvesting, each one could catch more fish, make more money. The remedy, as proposed by Stevens, buy up maybe half of the 415 fishing permits and take them out of circulation. The price tag, as much as $25 million - a mix of taxpayer money and low interest loans.

There are two associations of seine boat owners and fisherman. One of them hired a two-men consulting firm. The consultant with his name on the contract was Ben Stevens. At the time, Ben Stevens was also president of the Alaska State Senate and he had just written a state law facilitating the buyback.

The consulting contract was worth $5,000 a month, but if the firm got the buyback enacted in Washington, the fee would double to $10,000 a month due to, quote, "the increase workload during implementation of the buybacks."

One boat owners' association met in November 2004. Some members thought the Ben Stevens contract looked, yes, fishy. Member Victor Smith describes a back and forth between another member and Rob Zuanich, the group's executive director.

Mr. VICTOR SMITH (Resident, Alaska): Randy Babich asked Rob how the association was going to pay the $500,000 to Ben Stevens and Rob's response was that he believed that with a little convoluted accounting, he could keep the payments off the association's books.

Mr. SMITH: I had the same conversation with them as I'm having with you now.

OVERBY: But while the association calls it a Ben Stevens contract and Ben Stevens' name was on the signature line, it's not so clear what he did. He didn't register to lobby Congress, his partner did - Ted Stevens former chief of staff Trevor McCabe. And at the National Marine Fisheries Service, Michael Sterven(ph) names the lobbyist they've heard from about fleet reduction.

Mr. MICHAEL STERVEN (National Marine Fisheries Service): There were two that I correspond with through e-mail or phone. Trevor McCabe and Rob Zuanich.

OVERBY: And there's still another question about the buybacks, whether they're financially wise. If the goal is to reduce the salmon fleet by half, low salmon prices have already done that. Of the 415 permits, nearly half were used last year. The selling price of a permit fell to 20-some thousand dollars. But now prices have tripled or more. That's because the buyback is expected to pay $100,000 or more for each permit.

Rob Zuanich, at the boat owners association, declines to talk about Ben Stevens' role. Ben Stevens' defense attorney also declined. Trevor McCabe didn't respond to an interview request. Ted Stevens has refused all comment about his son's activities. I asked him about the propriety of Ben Steven's contract with the boat owners.

Sen. STEVENS: It would have - could have an impact on the overall investigation. I'm not going to answer that question.

OVERBY: On the phone from Anchorage, Republican activist Ray Metcalfe(ph) says it fits into a long list of Ted and Ben Stevens projects.

OVERBY: It may be ironic that as the Justice Department scrutinizes Ted and Ben Stevens, the salmon fleet buyback still isn't ready. Ted Stevens' bill last December had a glitch. He's fixing it in a new bill just out of committee.