Accessibility links
McCain Nearly Broke, but Stays Course The presidential campaign of Republican Sen. John McCain (AZ) raised $25 million in the first half of the year, but has spent nearly all of it. Still, McCain says he's not giving up. He was back in New Hampshire this weekend, trying to recharge his White House bid. 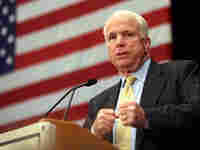 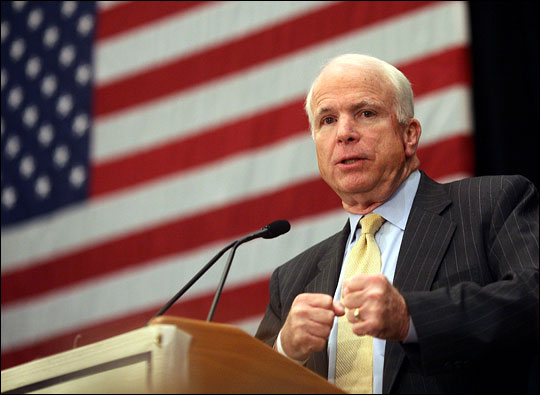 Sen. John McCain, the Republican from Arizona vying for the presidency, vows to remain in the race despite a campaign in disarray and nearly broke.

In less than a year he's gone from frontrunner to underdog largely because of the money situation. Still, he was back in New Hampshire over the weekend with hopes of recharging the campaign.

Like other presidential hopefuls, Sen. McCain filed his quarterly financial report on fundraising to the Federal Election Commission.

For the second quarter ended June, McCain reported contributions of $11.3 million, and spending of $13 million. For the year, his total receipts — contributions for primary and general elections, loans and transfers — were $25 million. But the campaign has spent $22 million. He has $3.2 million in cash and debts that total $1.8 million.

McCain shrugged off the glum forecasts for his political future, choosing instead to use his visit to New Hampshire to revitalize his crumbling campaign by appealing directly to voters. He started with New Hampshire where he bested presidential contenders in the 2000 election primary — and because that's where one of the first contests in the nominating race will take place in about six months.

At the American Legion hall in Claremont, New Hampshire more than 100 people showed up around 8:30 a.m. Frank Fahey was among them.

"I'm here to see if he can resurrect his campaign because I certainly want to be with a winner," Fahey said.

Winning seems like a dream for McCain as his campaign sinks in the polls and hemorrhages staff. He'll launch a bare-bones insurgent effort, traveling the state on his Straight Talk Express bus and numerous holding town hall meetings.

That approach worked for his campaign in 2000, but whether it can holdup now will depend on him.

"I don't think it's the same John McCain that we saw back in 2000," said Fahey, who has a lot of new questions for McCain.

When Fahey gets the chance, he addresses McCain pointedly: "Senator, there is no question you are an American hero; I voted for you the last time around. However, there's a perception created that you have become too close to President Bush and you have supported him too often."

"I should have called on your wife," McCain quipped, drawing laughter.

"Now as far as how close I am to Bush," he continued, "one of life's great ironies for me is that I was the vociferous critic of the way the war (in Iraq) was being conducted. I gave several speeches saying if we don't change what we're doing we're going to have a disaster. And so now I'm the guy who's responsible? 'Life is unfair,' as (former President) Jack Kennedy said."

McCain did call for the resignation of former Secretary of Defense Donald Rumsfeld 3 ½ years ago. But that's been buried under the headlines about McCain's ardent defense of the war.

Another question was about the widespread perception that his campaign was over.

McCain, who spent five years as a prisoner of war, said he had no doubts he could recover.

"I've had tough times in my life. This is day at the beach compared to some other others. We're going to be fine," he said. "I was never going to rely on money to win. I'm not a very good fundraiser, I'll admit, but I can out-campaign any of these guys," he said, adding that he'll be victorious in New Hampshire, Iowa and South Carolina.

McCain still has plenty of devoted supporters in New Hampshire; people like Steve Dupree, a former state party chairman who introduced McCain at an event in Concord.

"John McCain is a guy who refuses to back down from his core principles, and he is always done what he thinks is right for this country. He does not pander or change his views for political convenience despite whatever temporary setbacks that may cause a campaign from time to time," Dupree said.

Even more than the fundraising problems, it is McCain's views that have put him in this situation. He readily acknowledges his position on Iraq cost him support among Independents and his position on immigration cost him with Republicans.

One of the hallmarks of McCain's Straight Talk campaigns has been his almost constant accessibility to media. This weekend the questions were painful and the answers deadpan.

"Are there any circumstances under which you could imagine yourself not still being a candidate when the presidential primaries are held?" went one reporter's question.

Another reporter asked, "Which is more likely: making progress in Iraq or you winning the nomination?"

"You mean, in the words of Chairman Mao, 'It's darkest before it's totally black.' I don't know. It's hard for me to answer a question like that," McCain responded.