Accessibility links
Movie Review - 'The Men Who Stare at Goats' - GIs With A Third Eye A quirky comedy based on the true story of "psychic warriors" in the '70s and '80s, Goats stars George Clooney and Kevin Spacey as offbeat officers turned fearsome foes when their hippie leader (Jeff Bridges) goes missing. Critic Kenneth Turan says watching these practiced farceurs at work can't help but provide some laughs. 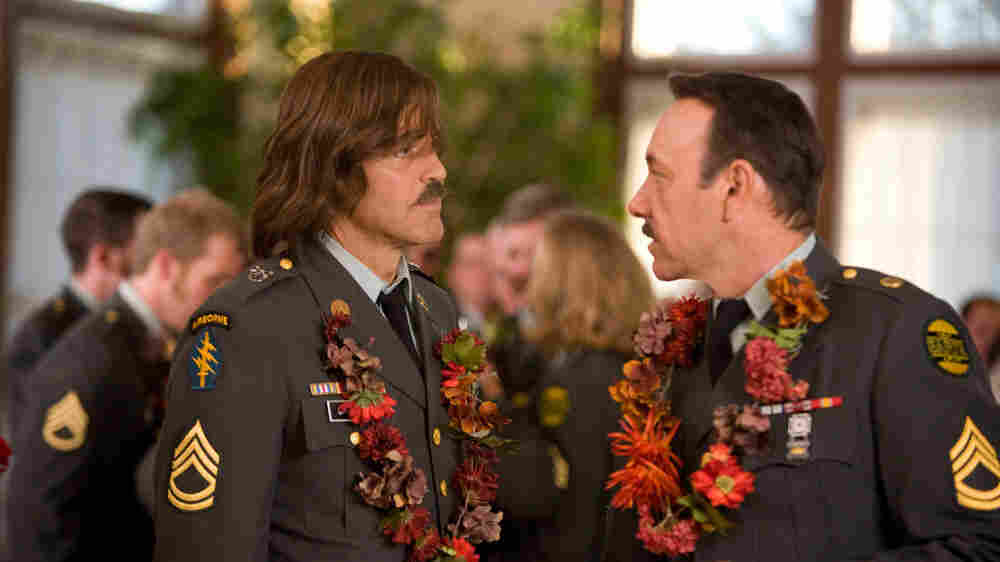 Free All That You Can Be: George Clooney and Kevin Spacey play members of a New Age Army unit whose special skills include cloudbursting and spirit channeling. When the unit's leader goes missing, all signs point to a renegade member. Laura Macgruder hide caption 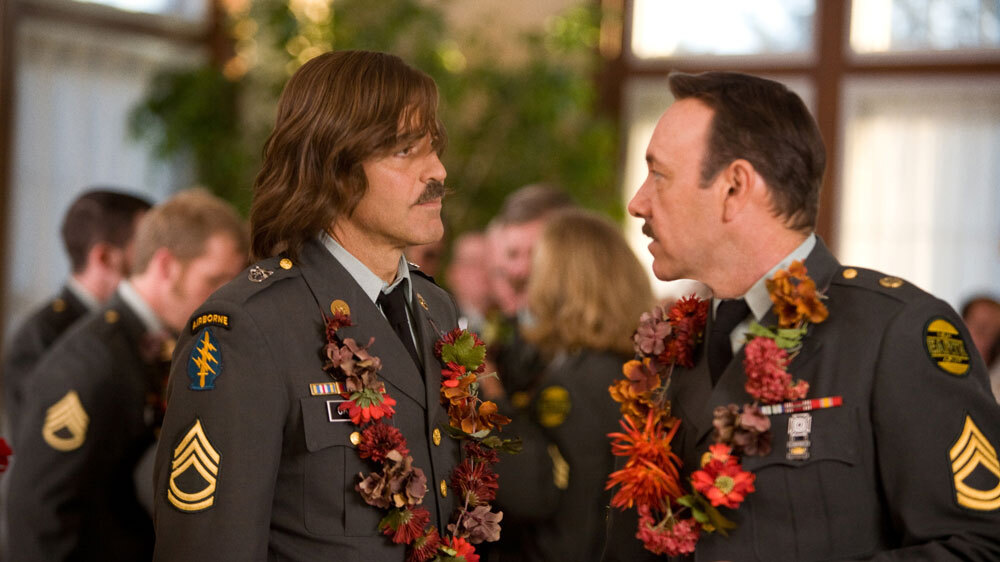 Free All That You Can Be: George Clooney and Kevin Spacey play members of a New Age Army unit whose special skills include cloudbursting and spirit channeling. When the unit's leader goes missing, all signs point to a renegade member.

The Men Who
Stare At Goats

The Men Who Stare at Goats sounds like an ethnographic documentary about the Bushmen of the Kalahari. But if you're expecting something like that, you're going to be surprised.

Instead, first-time director Grant Heslov has come up with a quirky comedic fiction inspired by one of the strangest true stories about the modern American Army: In the late '70s, as journalist Jon Ronson reported in his book of the same name, some high-ranking officers preached that the techniques and beliefs of the New Age counterculture could transform military practice, and they tried to put some of those techniques to work. The goal, as Jeff Bridges' long-haired, laid-back Bill Django puts it in Goats: "We must become the first superpower to develop superpowers; we must create warrior monks, men and women who can fall in love with everyone, sense plant auras, pass through walls ... and see into the future."

That dream never really came together, and The Men Who Stare at Goats isn't a complete success either. But it's worth watching nonetheless, not least because it's a showcase for a group of actors — Bridges, George Clooney, Kevin Spacey — who really appreciate its particular brand of farce.

Clooney plays a soldier who has a special gift for staring at goats so hard that bad things happen. To the goats. He also practices breaking up clouds with his mind, and likes to say things like, "We're Jedi; we don't fight with guns."

Clooney is a funny guy, often when you least expect it, and he's matched here stride for stride by Bridges as the ultimate military hippie, and Spacey in the small but juicy role of the organization's Darth Vader. The problem is that we don't get to these guys until 15 or 20 minutes into the picture. Instead we have to deal with a boring journalist played by Ewan McGregor before the fun can start.

The Men Who Stare at Goats is at its best when it talks about the origins of this New Age Army. It all started, apparently, with an earnest general, one Albert Stubblebine III, who was so worried that the Russians would get the psychological-weapons jump on us that he personally tried to walk through walls. It didn't work.

There doesn't seem to be enough story here to make a whole movie, but seeing the film's practiced farceurs at work can't help but be amusing. A lot more fun, anyway, than trying to will yourself through a wall.