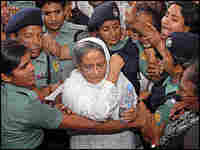 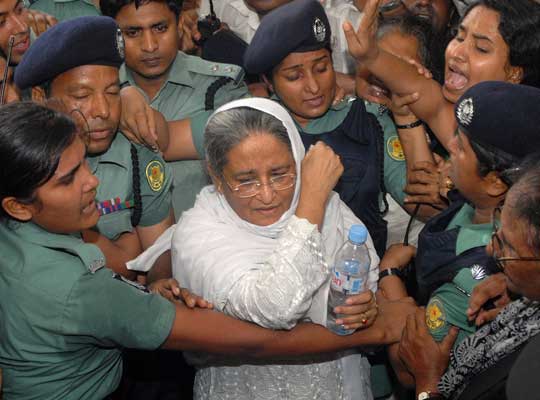 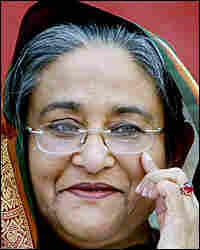 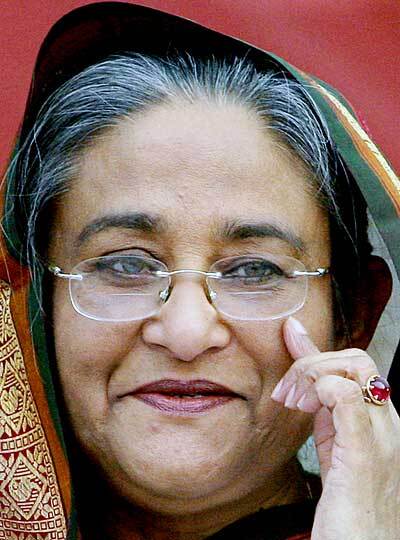 Thousands of troops arrived at Hasina's home and took her to a local court in the capital, Dhaka. Hasina, who heads one of Bangladesh's two main political parties, was denied bail and taken to jail until the trial, said defense lawyer Abdul Matin Khasru.

Dozens of her supporters demonstrated near the court shouting, "Free Hasina," before being driven away by baton-wielding police.

Hasina is the leader of the Awami League, one of two political dynasties that have dominated Bangladesh since 1991. The other is headed by her bitter rival, former Prime Minister Khaleda Zia, who also faces corruption charges.

Bangladesh has been under a state of emergency since mid-January when 30 people were killed in clashes following the end of Zia's five-year term in October. The country is now ruled by a military-backed, interim government. The interim government has vowed to fight corruption and clean up the nation's factional, often violent political system before holding the next election.

National elections planned for Jan. 22 were cancelled and the government said it will hold elections by the end of 2008. No dates have been announced.

More than 170 people have been arrested on corruption charges since the army-backed government took charge in January. Most of them are associates of Hasina and Zia.

Supporters of both women said the interim government has tried to force them into exile.

Khasru said Hasina was accused of extorting about $411,000 from a company in return for allowing it to build a power station while she was in office. Hasina served as prime minister from 1996 to 2001.

Hasina has denied the allegations, which she said were aimed at keeping her from contesting the next elections.

"It's a conspiracy to stop me from speaking for the rights of the people. I've done nothing wrong," Hasina told the court jammed with lawyers and journalists.

The New Delhi-based Asian Center for Human Rights agreed. They said Hasina's arrest was "nothing but a military operation sanctified by the Chief Metropolitan Magistrate" and an attempt to keep her out of the political process.

The interim government denied the conspiracy.

"There are specific charges against Hasina. Law will take its own course," said Mainul Hosein, the government's law adviser.

The Berlin-based, anti-corruption group Transparency International ranks Bangladesh, a nation of 145 million people, as one of the world's most corrupt countries.