Accessibility links
Excerpt: 'The Zen of Fish' Corson follows trainee chefs through 12 grueling weeks — among the world's sharpest knives — at the California Sushi Academy, charting an engaging history of "the fast food of Old Tokyo." 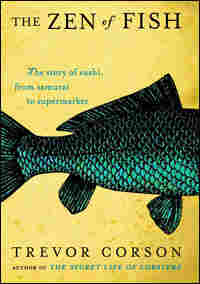 On the morning of the Hollywood party at Paramount Pictures, Toshi arrived at the restaurant well ahead of his staff. By 10:00 a.m. he was hard at work in the kitchen. The party would begin in eight hours.

Toshi stood at a stainless-steel table that would look at home in a morgue. The table was 12 feet long and ran diagonally across the kitchen. On its surface was a cutting board of high-density polyethylene, chemically fused to repel bacteria, fat, and blood, but soft enough that Toshi could wield his high-carbon blade for several hours without dulling its razor-sharp edge.

Toshi bent over a big block of blood-red flesh. When sushi first became popular in the early 1800s, a high-class chef like Toshi would have been run out of town for serving tuna. The bloody meat of fresh tuna and other red-fleshed fish spoils easily and the Japanese considered it smelly. The fatty belly meat of the tuna was especially despised. But with the advent of refrigeration, the fish could be kept fresh, and in the years after World War II the Japanese learned from Americans to love red meat, including tuna.

Takumi, the Japanese student, stood across the table and watched. On his cutting board sat a similar but smaller slab of tuna.

Toshi carved through the block of flesh like a sculptor, scrutinizing the muscle, turning and trimming. He tossed scraps into a bowl.

"We'll use these for spicy tuna," he said. He was speaking Japanese, but the words "spicy tuna" were in English. There isn't even a name for it in Japanese. In the early days of American sushi, Japanese chefs in L.A. had realized they could take the worst parts of the fish—the fibrous scraps, the flesh left on the skin, and meat past its prime—and chop them up with chili sauce. The taste of the fish was lost, but Americans loved it.

Takumi nodded. In a few minutes, he would scrape shreds of meat off the skin with a spoon, chop them up with the other scraps, and squirt the mixture full of hot sauce. But now he tried his hand at trimming his slab of tuna. When he started to cut, Toshi stopped him.

"No, not like that. You're cutting in the same direction as the fiber." With his finger Toshi traced the parallel lines of connective tissue that ran through the tuna's flesh like the grain in a piece of wood. "See? You've got to cut against the fiber." Toshi flipped the slab of meat over, so Takumi could slice into it from the other side. "Cut them thinner than you would for the restaurant," he added. "For a catering job like this, we go for volume."

Other restaurant staff trickled in to help prepare for the party. Toshi's office assistant dumped a two-pound bag of bright green powder labeled "wasabi" into a mixing bowl. Like most wasabi served in restaurants, there wasn't a shred of wasabi in it. Real wasabi is a rare plant that is notoriously difficult to grow, and tastes quite different. This was a mix of horseradish and mustard powder. She added water and stirred. The powder jelled into a green blob, which emitted fumes. Toshi wheezed.

"Get the hell out of the kitchen with that thing!" he bellowed. "It's going to drive us all crazy."

The woman bowed, hugged the bowl to her chest, and left, her eyes watering.

Soon Kate and the other students trickled in and loaded the catering equipment into a rented truck. Jay shouted out instructions.

"Bring a minimal amount of stuff with you!" Jay said. "Do not bring big bags! Otherwise, you're not going to get through security!"

But of course, they took their knives.

The students would ride in the restaurant's old van. Kate hopped into the front passenger seat and pulled the door shut with a bang. They cruised down the freeway. In the distance the glass towers of downtown L.A. rose through the haze. Soon they were driving straight toward the gigantic white "HOLLYWOOD" letters on the hill. They pulled alongside a vast, high-walled compound. Security cameras monitored the van's arrival.

At the security checkpoint there were men with guns—big guns. Some rested Winchester rifles on their shoulders. Others carried six-shooters on their hips. Most of them wore ten-gallon hats and chaps. They were actors. The real guards wore windbreakers and carried walkie-talkies. The actors passed their guns to the guards and walked through the metal detector. When the guards saw Kate's chef's jacket, they found her name on a list and waved her through, along with her case of knives.

Inside the compound Kate followed her classmates past a row of hangars and emerged onto the edge of an American frontier town of a hundred years ago, bustling with inhabitants of the Old West. The sushi students wandered into the town like a gang of lost samurai. Around them cowboys twirled lassos. The smell of grilled beef swirled through the streets.

The town continued for blocks. In the distance a pointy white water tower perched on stilts. Painted on its side was a snowy mountain under the word "Paramount." Kate shambled through the streets clutching her knife case. Ahead she saw Toshi and some of the staff setting up their sushi stall on a street corner.

More than sixty restaurants would be hawking food from colorful stalls—most of it seared or baked or fried, all of it smelling delicious. Some of those restaurants were legends. Pink's and its "famous hot dogs" had started in the 1930s. The stall beside the sushi stall was belching smoke. It was called "The Pig." When Toshi found a chance to slip away for a few minutes, he'd make a beeline for Lawry's roast beef.

Now he buttoned up his chef's jacket and surveyed the equipment—the 25-gallon coolers filled with fish, the insulated containers of rice, the cases of knives, the soy-sauce bottles, the blocks of disposable chopsticks.

Then he surveyed the students. Some were helping set up, but others stood around, not sure what to do. His eye lingered on Kate.

"We need backup," he said to himself.

Toshi rooted in the pile of equipment for his secret weapon—the Suzumo SSG-GTO. He located the black padded case and carried it to the back of the stall.

The Suzumo SSG-GTO looked like a wooden tub with a lid. Sushi chefs had been keeping rice in wooden tubs for nearly 200 years. This tub was different. Toshi tugged an electrical cord out of the back and searched for an outlet. He froze. This was the Old West. There were no outlets.

Toshi scowled and scanned the street for a grip. He'd been around Hollywood long enough to know that anywhere movies were made there was electricity. You just needed a grip to show you where it was. He spotted a man bristling with tools, gadgets, and brackets hanging off belts. Toshi dragged the fellow over to the sushi stall. The grip knelt and unscrewed a steel plate in the ground. Inside was an array of heavy-duty sockets. Toshi powered up the GTO.

Like the town around him, the wood on Toshi's wooden tub was fake. He lifted off the plastic lid and dumped in cooked rice. He pressed a button. A drawer slid out. He typed instructions on a keypad and the GTO hummed to life.

Toshi's wife and children had arrived. His son Daisuke rushed over to the GTO. The Japanese student, Takumi, joined them and the three of them leaned over the machine, hands on their knees, and peered inside.

Like the robots that build cars in the factories of Toyota and Honda, sushi-making robots have become commonplace in Japan, laboring tirelessly behind the scenes at mass-market sushi establishments. In Europe, owners of conveyor-belt sushi restaurants have been known to install elaborate, stainless-steel sushi robots in plain view, where customers admire their high-tech wizardry. But in the U.S., sushi robots are a well-kept secret. Most restaurant owners keep them out of sight, and use them for takeout and delivery orders.

Toshi pressed a button on the GTO. Gears clicked and motors whirred. The GTO could crank out professional-grade rectangles of pressed sushi rice at speeds approaching 1,800 per hour. But it jammed. Toshi cursed.

The foregoing text is excerpted from The Zen of Fish, copyright © 2007 by Trevor Corson. All rights reserved. No part of this book may be used or reproduced without written permission from HarperCollins Publishers, 10 East 53rd Street, New York, NY 10022. 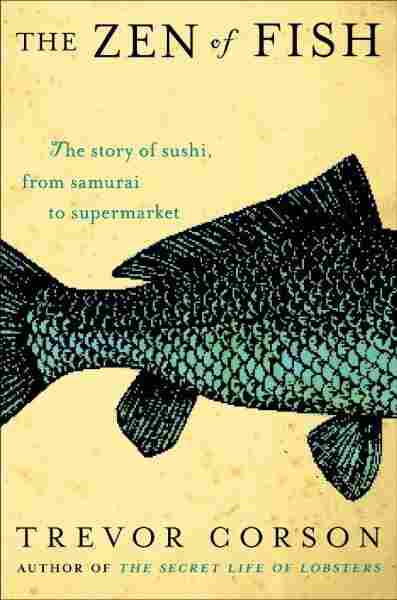 The Story of Sushi, from Samurai to Supermarket

Title
The Zen of Fish
Subtitle
The Story of Sushi, from Samurai to Supermarket
Author
Trevor Corson