Accessibility links
Magic And Bird: A Rivalry Gives Way To Friendship In the 1980s, the "golden era" of the NBA, basketball superstars Larry Bird and Earvin "Magic" Johnson had an intense rivalry that elevated the entire league. But after years of hating each other, they developed a close friendship, chronicled in a new book, When The Game Was Ours. 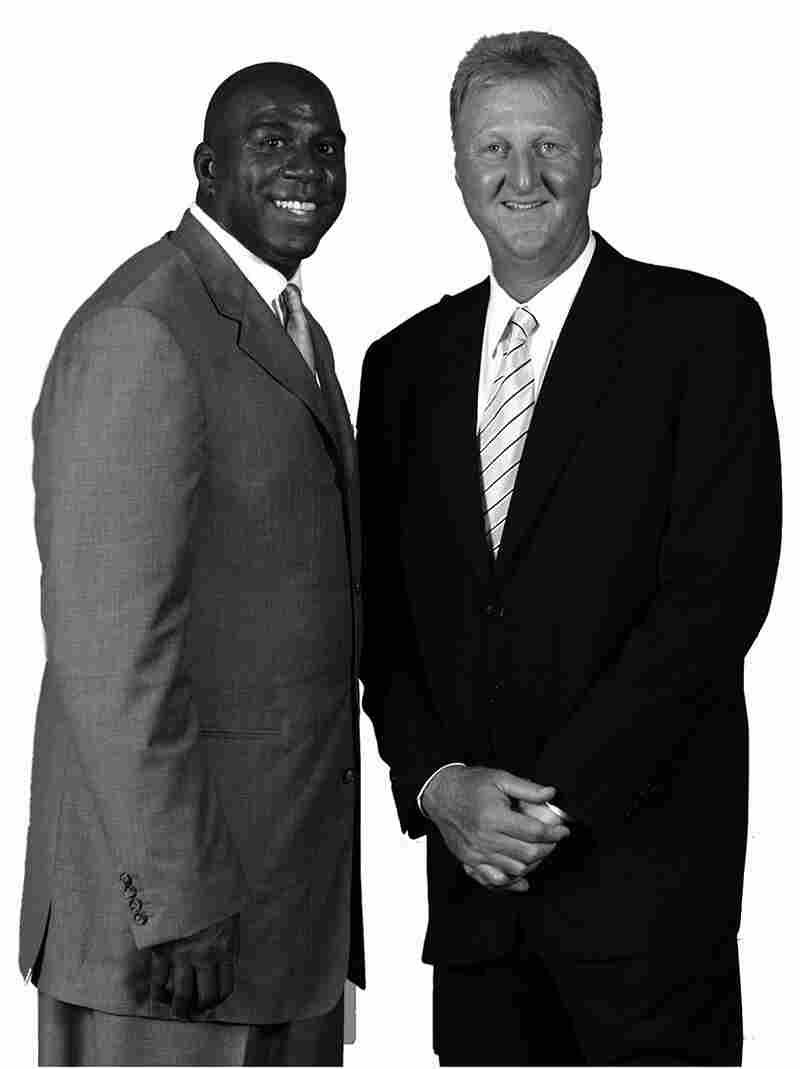 Retired NBA superstars Magic Johnson (left) and Larry Bird, who had an intense rivalry during the 1980s that captured the nation, also developed a close friendship. They detail their relationship in the new book When the Game Was Ours. Marc Serota hide caption 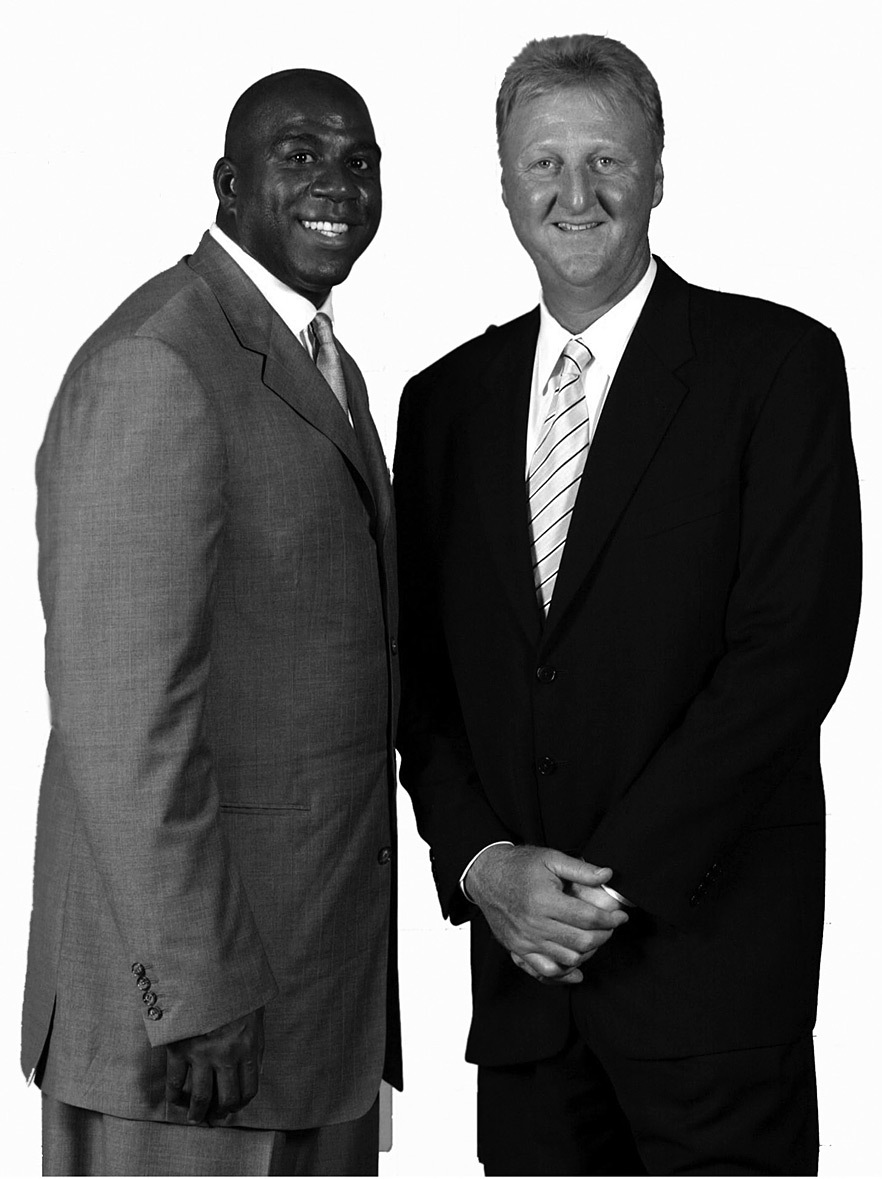 Retired NBA superstars Magic Johnson (left) and Larry Bird, who had an intense rivalry during the 1980s that captured the nation, also developed a close friendship. They detail their relationship in the new book When the Game Was Ours.

In the 1980s, the Boston Celtics and the Los Angeles Lakers dominated professional basketball, winning a combined eight titles during a decade that was known as the "golden era" of the NBA.

The modern-day NBA would not be what it is without the era's superstars — Hall of Famers Larry Bird of the Celtics and the Lakers' Earvin "Magic" Johnson — and the rivalry that elevated the entire league.

In a new book, When the Game Was Ours, co-written by Jackie MacMullan, Bird and Johnson detail their love and hate for one another over the years. Johnson says that after competing against each other in the 1979 NCAA championship game, they joined NBA teams that already hated each other.

"We're so competitive anyway that there was a dislike there," Johnson tells NPR's Michele Norris. "I even hated him more because I knew he could beat me."

The rivalry between the two teams started in the 1950s — and Bird says he and Johnson "rekindled the fire."

"We did it in a way where we caught the imagination of everyone in America," he says. "People wanted to see us play against one another. ... If you like competition you want to play against the best, and that's what we wanted to do."

When the Game Was Ours
By Larry Bird and Earvin Magic Johnson
Hardcover, 340 pages
Houghton Mifflin Harcourt
List price: $26
Read An Excerpt

Then in 1985, Converse asked Johnson and Bird to tape a shoe commercial in French Lick, Ind., Bird's hometown. Johnson says he agreed to it, but he was nervous because he had never had a conversation with Bird.

During the shoot, the two didn't talk. But then a curious thing happened: They bonded over lunch at Bird's house.

"His mom gave me the biggest hug and hello, and right then she had me," Johnson says. "Then Larry and I sat down for lunch, and I tell you, we figured out we're so much alike. We're both from the Midwest, we grew up poor, our families [are] everything to us, basketball is everything to us. So that changed my whole outlook on Larry Bird." 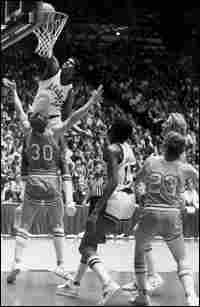 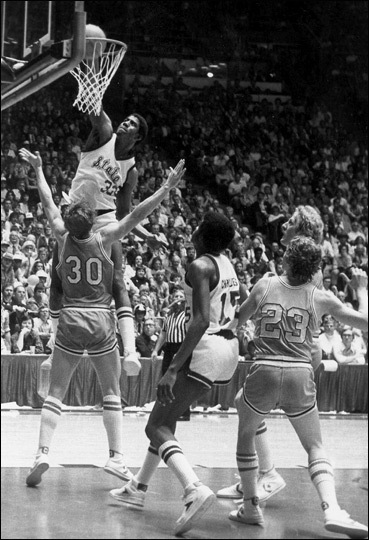 Magic Johnson dunks the basketball against Bob Heaton of the Indiana State University Sycamores while Larry Bird (standing in front of No. 23) watches.

Johnson's teammates and coach couldn't believe the two had lunch.

"Believe me, everybody was shocked," he says.

Bird said he was nervous about getting too close to his rival.

"I always thought you had to keep the edge," he says. "You don't want to get too close to a person because you will get a little soft. Once me and Magic left that commercial shoot in Indiana, it was back to business, believe me. We both had a burning desire to win championships. And once we got with our teams, all of that was forgotten until we retired."

The Diagnosis — And Phone Call

Then, on Nov. 7, 1991, Johnson called Bird and told him he had been diagnosed with HIV. Bird was on the short list of his basketball colleagues to tell before he got in front of the camera and shocked the nation.

"We'd been connected to each other since college," Johnson says. "We were always thinking about each other — what we were doing and how we were doing. I knew that he would want to know and also know from me. And I'm glad I was able to talk to Larry and let him know that I'm gonna be OK, and I knew he was going to be supporting me."

Bird says he'll never forget the moment he got the call.

Sometimes that armor is weakened. As strong as I appeared to be, I still needed a friend to just say, 'Hey man, I'm here, I'm supporting you, just do what you got to do to be here for a long time.'

"It was probably one of the worst feelings you could ever imagine," he says. "It was very difficult. We played against each other for a long time. At that time, HIV was known to be a death sentence. But for some reason, when he told me he was going to be fine, I believed him because everything he's ever said had really come to be true, as far as winning and winning championships. So I felt a little bit better. But still — I was a gamer, I loved game day; I couldn't wait to get down to the gym. But when I got that call that's the one time I can honestly say I didn't feel like playing."

Johnson said he needed Bird in that moment — and he knows he can count on him, even if they see each other only once a year.

"Both Larry and I are very strong, strong-willed, strong-minded," he says. "Sometimes that armor is weakened. As strong as I appeared to be, I still needed a friend to just say, 'Hey man, I'm here, I'm supporting you. Just do what you got to do to be here for a long time.' You don't have to talk every day and we don't. But we know that if I need something, he's gonna be there. If Larry needs something, I'm gonna be there. And he knows that. And then when we do get together — when I see Larry and I get that pound, and I get that hello — I'm good. It takes me through my next year or two, until I see him again."

Excerpt: 'When The Game Was Ours' 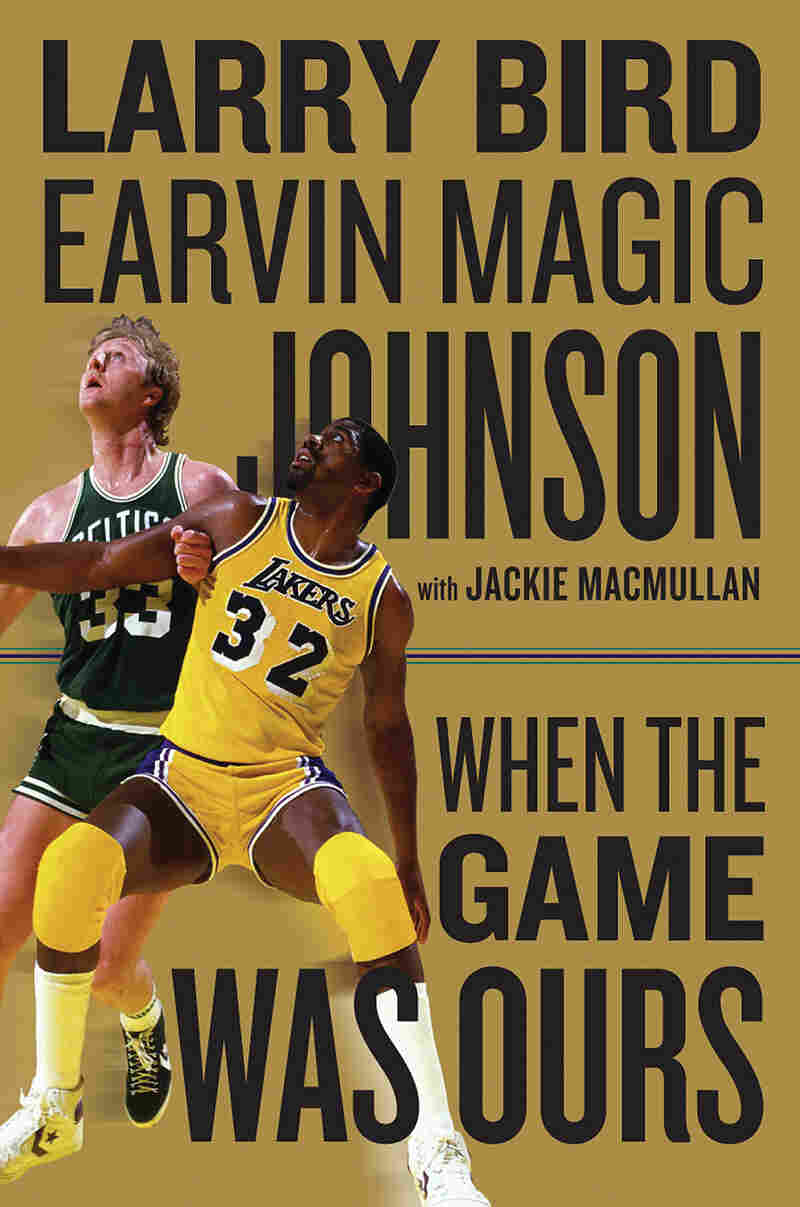 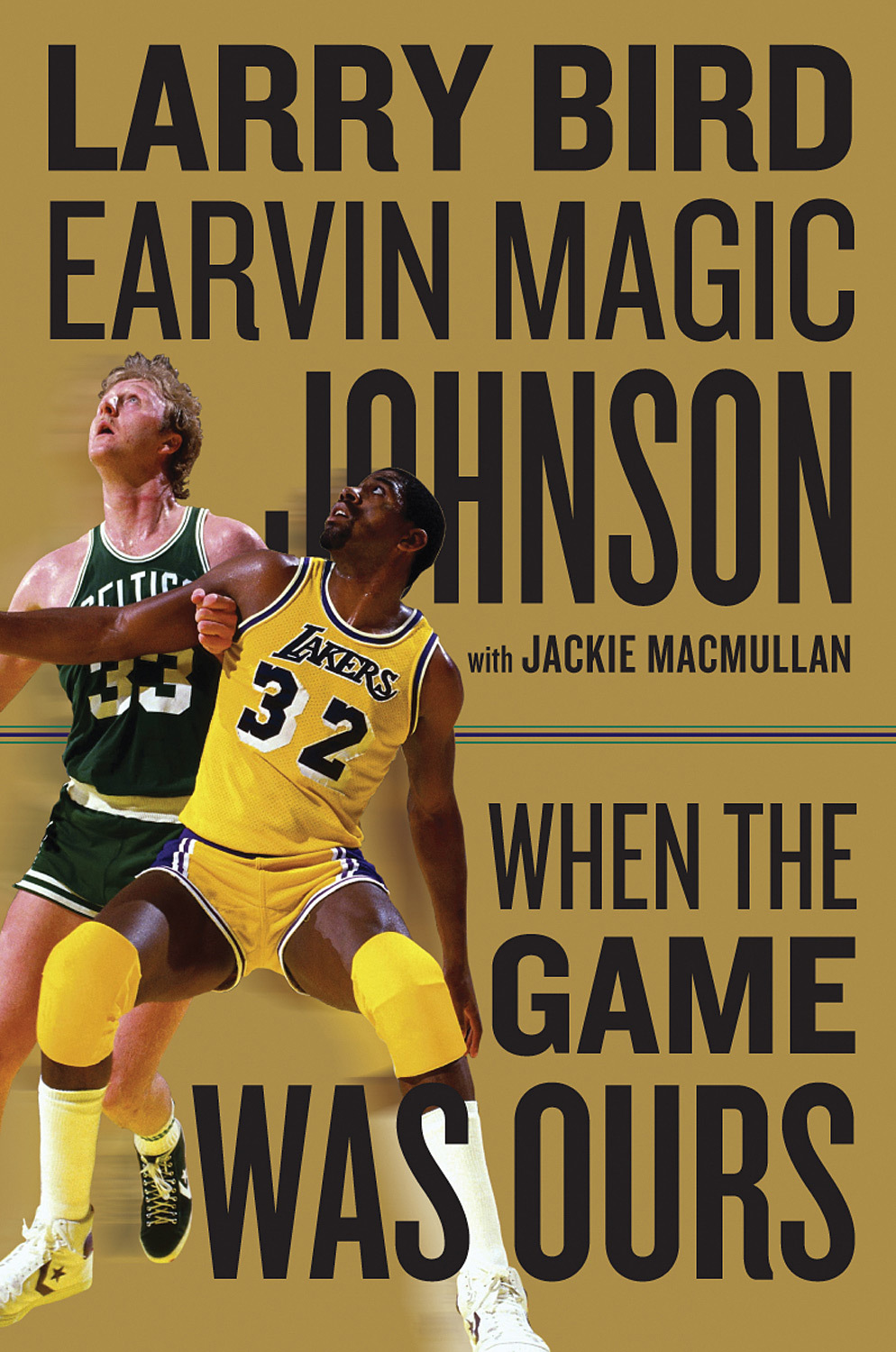 When the Game Was Ours
By Larry Bird and Earvin Magic Johnson
Hardcover, 340 pages
Houghton Mifflin Harcourt
List price: $26

The errant shot came off the glass at a sharp angle, but Larry Bird, charting the flight of the ball, pulled down the rebound and advanced without hesitation, swiveling his head as he examined his options.

Earvin Johnson had already begun to head down the court the moment the ball was in flight. He'd been playing with Bird for only six days on a team of college All-Stars in this international roundrobin competition, yet already Johnson had determined that Bird was the most resourceful rebounder they had.

Bird filled the center lane, and Magic streaked down the right side, calling for the ball, but the forward looked away, as if he had pressing matters elsewhere. For one brief instant, Magic was disappointed. "I guess he's not going to give it to me," he murmured.

And that's when it came: a behind-the-back missile that landed directly on Magic's right palm. It remained there just long enough for Johnson to disarm defender Andrei Lapatov with a crossover dribble, then sling it back over his shoulder with a no-look feed to Bird.

Indiana State's star barely aligned the seams before his touch pass was back to Magic, leaving no time for the overmatched Soviet player to react. As Johnson banked in the lay-up, the crowd at Rupp Arena in Lexington, Kentucky, roared with delight.

Magic turned and charged toward Bird to offer him his signature high-five. Bird slapped the teenager's hand, and the two jogged back down the floor, side by side, one skipping, clapping, and celebrating as he went, the other, head down, expressionless, as if nothing remarkable had occurred.

Johnson had never met Bird before the tournament. He was stunned at how well the forward passed the ball, and when Bird fed him the no-look pass, Magic told himself, "I'm not going to let this guy upstage me."

"It was an incredible three seconds of basketball," Magic said. "It was boom, boom, boom! I'm thinking, 'Man, I love playing with this guy!' And believe me, the crowd loved it too."

Some thirty years after that collaborative transition basket, executed against the Soviet Union's national team when Magic was just 18 years old and Bird only 21, both remember the play with startling clarity.

"The defender was stumbling to keep up with us," Bird recalled. "We were coming at him so fast that his head was going around and around, and he ended up in a circle. I was sort of laughing, because the poor kid didn't have a clue."

He wasn't the only one. No one thought to chronicle the footage of Bird and Magic's wizardry in the open floor. There were no breathless descriptions of the artful passers in the morning papers. In 1978, though both had displayed a developing basketball pedigree, they were not widely recognized as elite players. At that juncture, neither had won an NBA championship, a league MVP, or, for that matter, an NCAA title. The irony of Bird and Magic commencing their storied relationship as teammates did not register because their parallel careers had not yet evolved into one of the compelling rivalries in basketball history.

"They were certainly good," noted Michael O'Koren, their tournament teammate, "but they weren't Magic and Larry — not yet."

Instead, Johnson and Bird were second-stringers on an amateur basketball team participating in an international round-robin competition called the World Invitational Tournament, or WIT, attempting in vain to prove to the coach, Joe B. Hall, they were worthy of prime-time minutes.

Although Bird and Magic occasionally shared knowing glances when the two of them outwitted the starters in practice, Bird revealed little of himself to Johnson. He was a young man of few words — until he went back home to French Lick, Indiana, and tracked down his brother, Mark Bird.

Excerpted from When The Game Was Ours by Larry Bird and Earvin "Magic" Johnson with Jackie MacMullan. Copyright 2009 by Magic Johnson Enterprises and Larry Bird. Reprinted by permission of Houghton Mifflin Harcourt. All rights reserved. 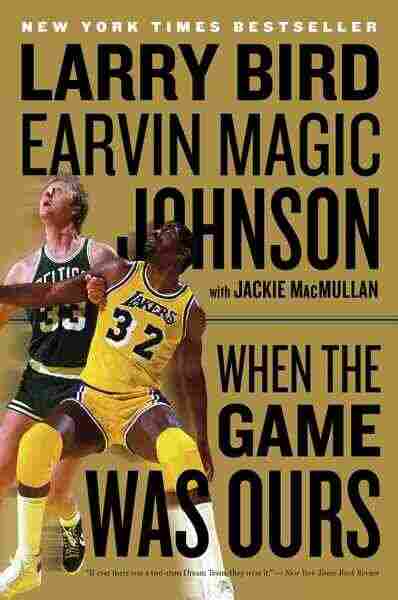