Accessibility links
Nogales Diary: Border Town Sees Business Decline In the border town of Nogales, Ariz., shops and restaurants that rely on Mexican shoppers are closing. Residents say the downtown area has become a ghost town because of stricter immigration policies, overburdened port infrastructure and the worst recession in memory. 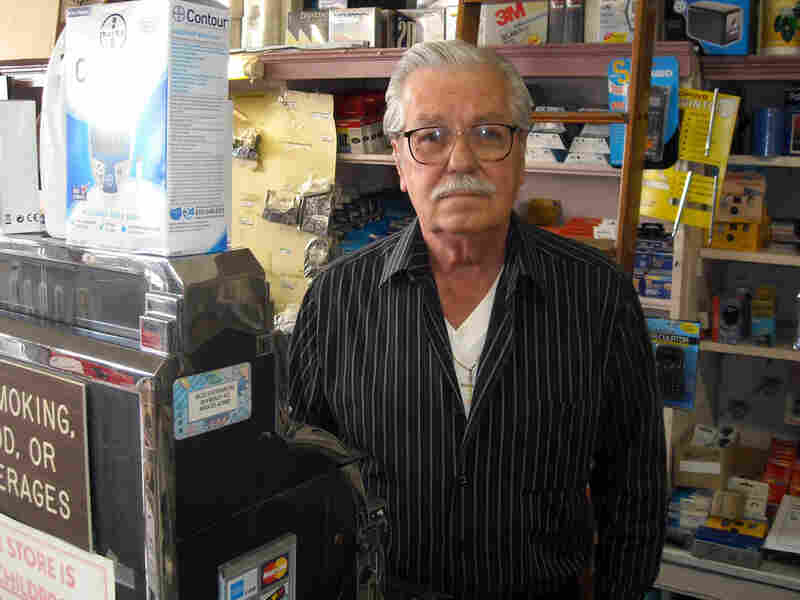 Ernesto Chavez, 74, has run this stationary shop in downtown Nogales, Ariz., for most of his life. He says he's never seen business so bad. Sales are down 50 percent. Peter O'Dowd for NPR hide caption 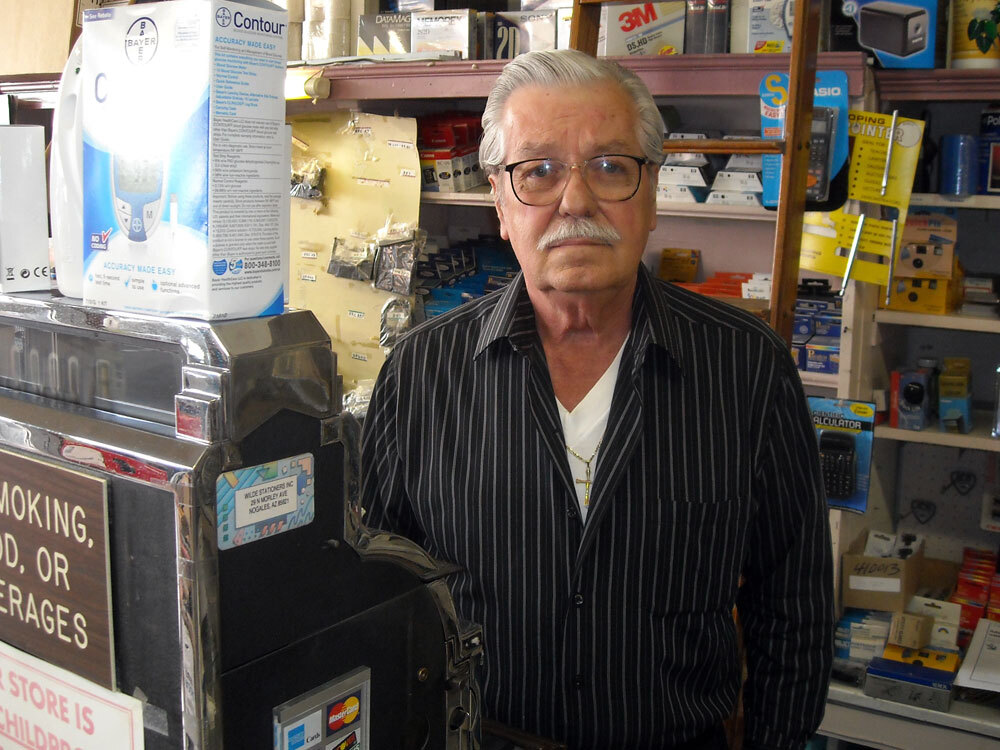 Ernesto Chavez, 74, has run this stationary shop in downtown Nogales, Ariz., for most of his life. He says he's never seen business so bad. Sales are down 50 percent.

Just after the morning rush at a McDonald's in the border town of Nogales, Ariz., a few people linger in the dining room. Two years ago, when Gael Sylvia Pullen first bought the franchise, she says it was full of Spanish-speaking customers. This business, like so many others within sight of the international line, depends on Mexico.

It's a customer base that's increasingly difficult to reach. Shops and restaurants in Nogales that rely on Mexican shoppers crossing the international line are closing. Lifelong residents say the downtown area has become a ghost town.

In Arizona, legal border crossings in both directions have dropped by about 1 million people a year since 2003. That's partly because just moving across the line has become an inconvenience. Agents on both sides have tightened inspections. But staffing is short, and lines of cars clog the ports. This global recession is the latest blow.

"Someone once described it to me — specifically my accountant — as us being in the middle of a perfect economic storm," Pullen says.

It's a similar story along the border from Tijuana to Juarez, says Gordon Hanson, who studies border economies at the University of California, San Diego.

"The economic downturn that the U.S. has been experiencing in the past 18 months has hit international trade and international commerce particularly hard," he says.

Hanson says Mexican citizens who live in border towns bear the brunt of a U.S. recession. Large American factories that operate on the Mexican side make fewer seat belts and televisions, and slash jobs in a downturn. With less money to spend, and more security hassles to cross into the U.S., Hanson says people on the Mexican side prefer to stay home.

"What increased security presence on the border does by increasing wait times is throw sand into the wheels of commerce," says Hanson. "It's going to slow everything down."

That compounds an even larger problem. Trade has already slowed to a crawl in Nogales. Each winter, about half of America's fresh produce from Mexico comes through the Mariposa port. Three decades ago, the port was designed to process 400 trucks a day. Four times that many — about 1,600 — limp through it now. At peak times, trucks sometimes idle at the border for 10 hours waiting to cross, costing produce companies and local governments an estimated several hundred million dollars annually in lost revenue and sales tax.

Banking On A Port Expansion

But there may be a fix in sight. Last month, officials from both Mexico and the U.S. were in Nogales to celebrate a new expansion of the port of entry.

The $200 million federal stimulus project will nearly triple Mariposa's capacity. Arizona Gov. Jan Brewer says that when it's complete, everyone from big produce companies to small businesses will benefit.

"Certainly it's going to make it more accessible for people to travel back and forth quicker so they can cross the border and spend dollars and help the economy," he says.

Hanson agrees with this outlook.

"Improving border infrastructure is not a bridge to nowhere," he says. "And you've had mayors along the border on both sides, in Mexico and the U.S., pleading with their state and local governments for more investment in infrastructure that helps trade happen."

Better ports may not come in time for everyone. Just a few feet from the border, cars rush by and music filters out of clothing stores and perfume shops. But inside, it's quiet. Ernesto Chavez stands alone in his cluttered stationary shop where business, dependent on Mexican visitors, has fallen 50 percent in the past year.

"The economy is completely flat," says Chavez. "As you can see, the pizza places are closing down. Gas stations are closing down. I'll tell you what: I've been here in this store for 49 years, but never, ever have I seen it the way it is right now."

When asked if he's looking forward to the port expansion, if it will boost sales when Mariposa opens in 2014, the 74-year-old Mexican native shrugs. By then, he says, it could be too late.