Accessibility links
Lessons From The Fall Of The Berlin Wall Twenty years ago, when the Berlin Wall was breached, it marked the beginning of the end for the Soviet empire. But NPR Senior News Analyst Daniel Schorr says there are other physical walls today: the one between the Israelis and the Palestinians. A wall, he says, can mean not only closed borders, but also closed minds. 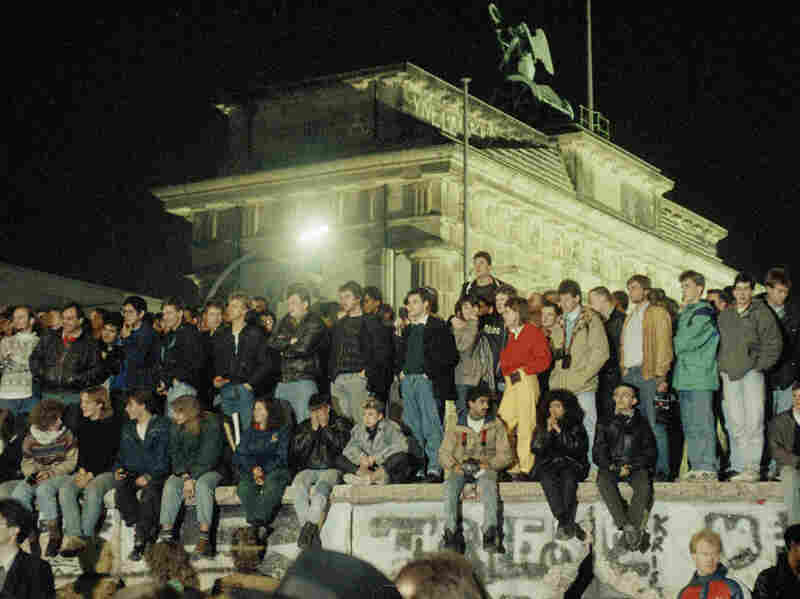 Hundreds of Berliners gather by the Brandenburg Gate to watch the dismantling of the Berlin Wall. Jockel Finck/AP hide caption 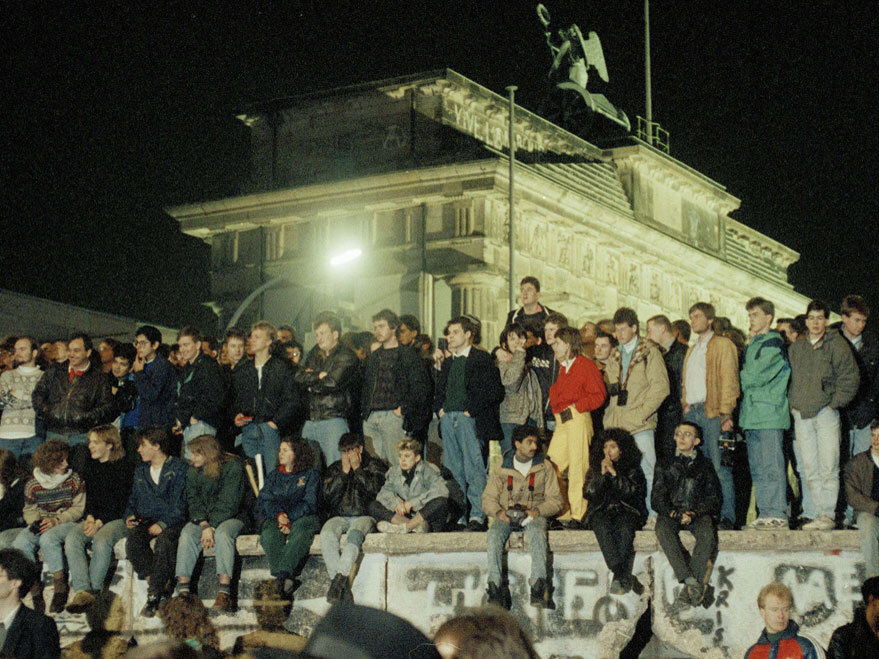 Hundreds of Berliners gather by the Brandenburg Gate to watch the dismantling of the Berlin Wall.

I'm generally not much on historic anniversaries, but this one is special. Twenty years ago, the Berlin Wall was breached. That marked the beginning of the end for the Soviet empire. And Angela Merkel, who grew up in East Germany behind the wall, spoke for a united Germany in Washington on Tuesday.

At dawn on a Sunday morning in August 1961, I witnessed the VoPos — the East German police — unrolling bales of barbed wire, soon to be replaced by concrete blocks that turned East Berlin into a prison.

Twenty-eight years the wall lasted, while other parts of the Soviet realm — Hungary, Poland, Czechoslovakia — became unstuck. President Kennedy came to West Berlin in 1963 to denounce the wall. President Reagan in 1987 came to issue a challenge: "Mr. Gorbachev, tear down this wall."

On Nov. 9, 1989, the East German authorities, trying to ease the pressure, opened up several checkpoints for visits. Too late. East Berliners, first by the dozens, and soon by the thousands, swept through the opening in the wall. Gorbachev told the East German authorities not to expect any military help from the Soviets. Soon, Berliners were dancing on top of the wall and breaking out pieces of the wall, sometimes with their bare hands.

In retrospect, that marked the demise of the empire that Lenin and Stalin had created. It was not long before East Germany was welcomed back into a unified state, trying to learn democratic ways.

Merkel, who had shunned politics as a doctor of physics, joined a burgeoning democratic movement, on her way to the chancellorship.

There are other physical walls today, the one between the Israelis and the Palestinians, for example. But a wall can mean not only closed borders but closed minds. In Iran today, strict suppression of dissent is met by the technology of freedom: the Internet, which breaks down walls.

It remains true, as the poet Robert Frost wrote, "Something there is that doesn't love a wall."