Accessibility links
Kilimanjaro Glaciers May Vanish In A Few Decades The glaciers atop Africa's Mount Kilimanjaro may be gone entirely in the next few decades. A new study shows that 85 percent of the ice cover that was present in 1912 has vanished, and the ice continues to melt rapidly.

Kilimanjaro Glaciers May Vanish In A Few Decades

Kilimanjaro Glaciers May Vanish In A Few Decades 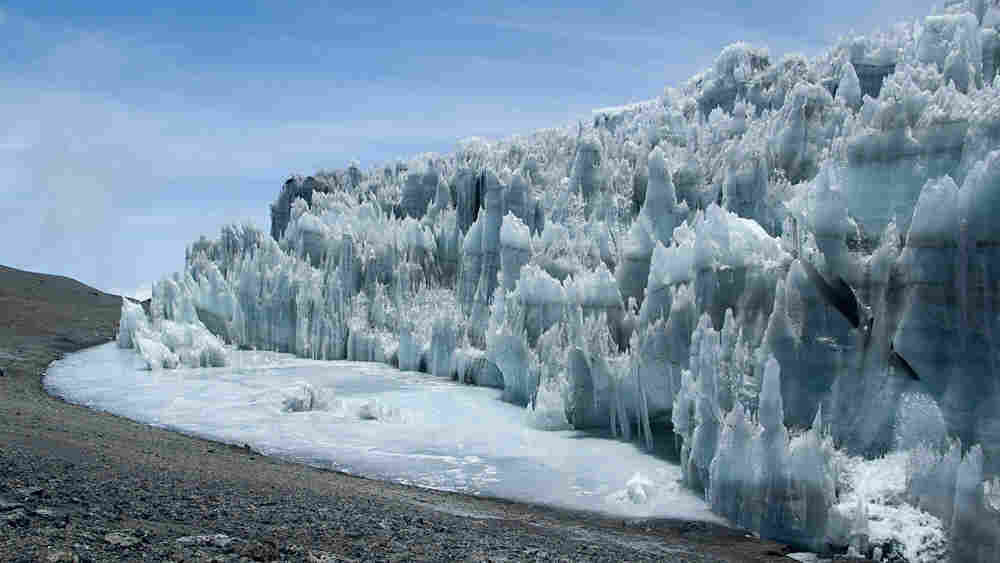 Decken Glacier is part of Mount Kilimanjaro's former Southern Ice Field. A new study says 85 percent of the ice cover that was present on Kilimanjaro in 1912 has melted. Douglas Hardy/UMass Geosciences hide caption

The glaciers atop Africa's Mount Kilimanjaro may be gone entirely in the next few decades, according to a new study. Researchers at Ohio State and the University of Massachusetts have shown that 85 percent of the ice that was present atop the Tanzanian mountain in 1912 has melted away.

Kilimanjaro's melting ice is often mentioned as an iconic example of changes due to global warming. But scientists don't agree about how much of that melting is the result of long-term climate trends. A significant amount of the ice disappeared in the first half of the 20th century, before significant planetary warming. But the new study suggests that global warming is playing an important role in more recent — and very rapid — melting.

The study will be published in the Proceedings of the National Academy of Sciences.