Accessibility links
Maine Voters Reject Gay Marriage Voters in Maine have repealed a state law that would have allowed same-sex couples to wed. Gay marriage has now lost in all 31 states in which it has been put to a popular vote. Five states have granted same-sex marriage through the courts or their legislatures. Activists in Maine say the loss is just a temporary setback. 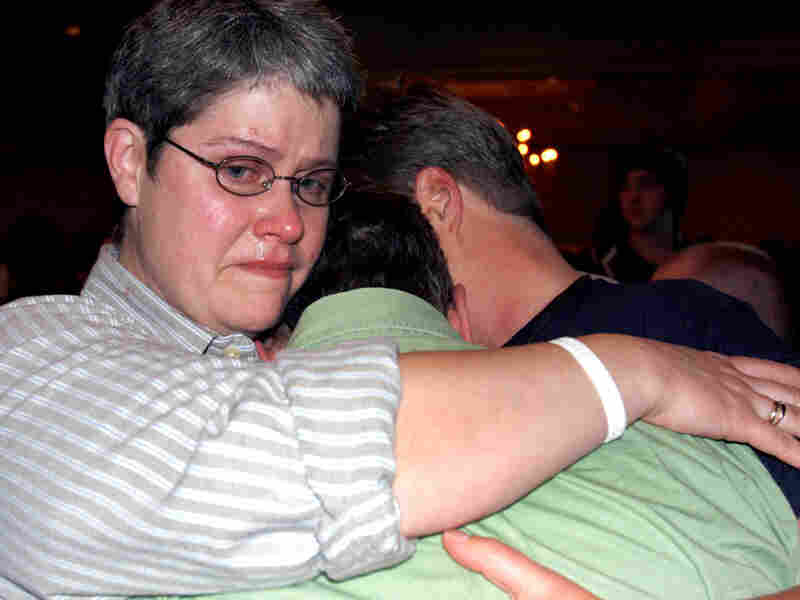 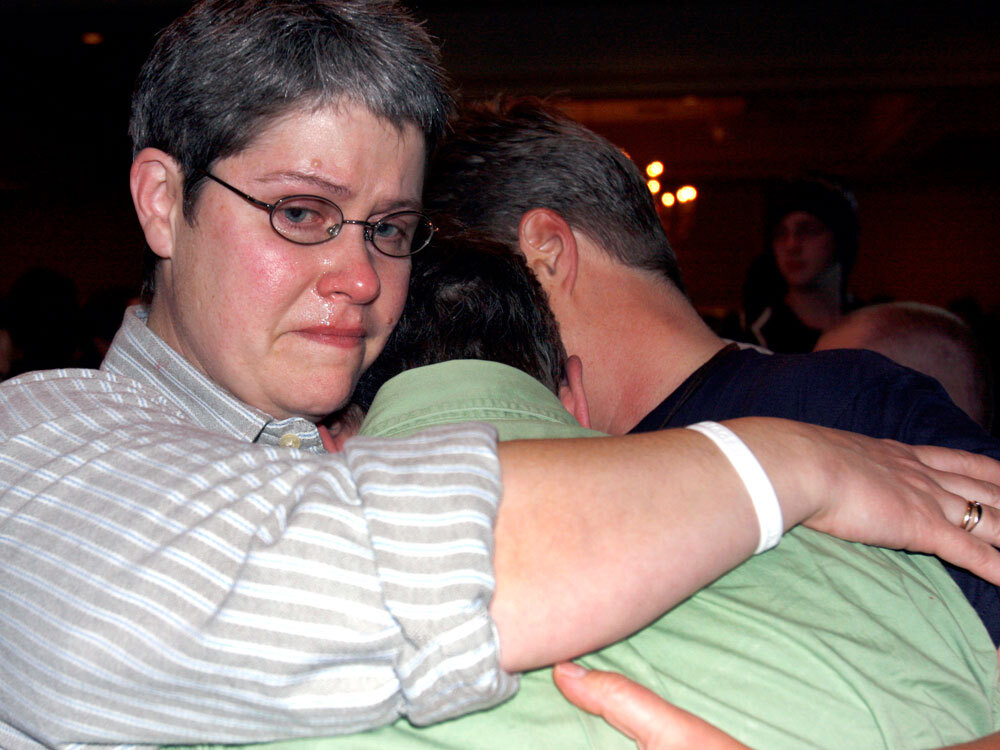 Partners Lisa Brackbill (left) and Lisa Pugh (right), both from Buckfield, Maine, console one another along with Darlene Huntress (center) of Portland, after learning that Maine voters rejected same-sex marriage.

Same-sex marriage advocates put together a massive campaign war chest, outspending opponents by a wide margin. They pounded the pavement and hit the airwaves and the blogosphere with a message of fairness and equality.

But the message did not connect with a majority of Maine voters. And that was a profound disappointment for a crowd of several hundred who showed up at a hoped-for victory party in a Portland hotel ballroom Tuesday night.

"This is about love and commitment and family," said Jesse Connolly, campaign manager of Protect Maine Equality. "So we'll stay the course, and I ask you to stay the course with us."

Though he said he was proud of the campaign he ran with the help of 8,000 volunteers, Connolly conceded defeat in a short written statement.

Just a few blocks away, a small group of same-sex marriage opponents was celebrating.

"We prevailed because the people of Maine, the silent majority, the folks back home spoke with their vote tonight," said Marc Mutty, campaign chairman of Stand for Marriage Maine.

In front of a cheering crowd, Mutty said: "Let's be clear. What the people of Maine had to say was that marriage matters, and it's between a man and a woman. This has never been about hating anyone, hating gays or anything. This has been about marriage, and only about marriage and preserving it." 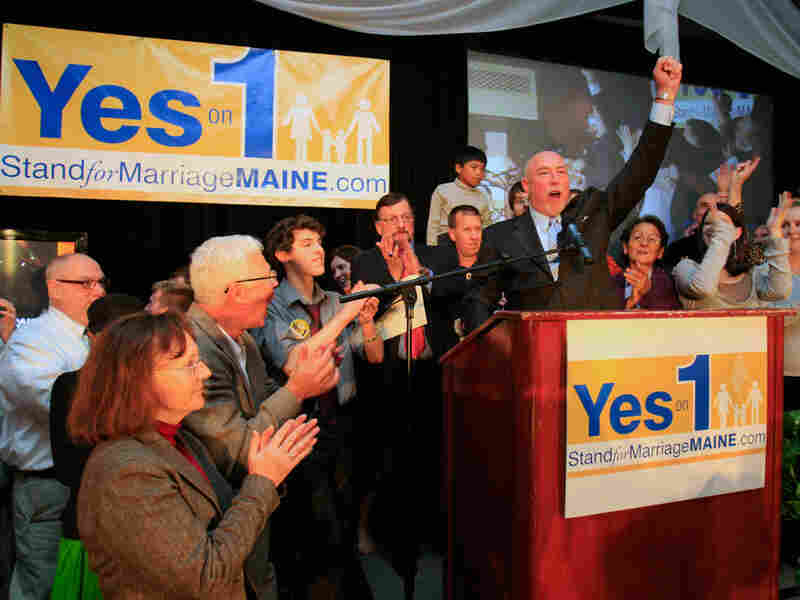 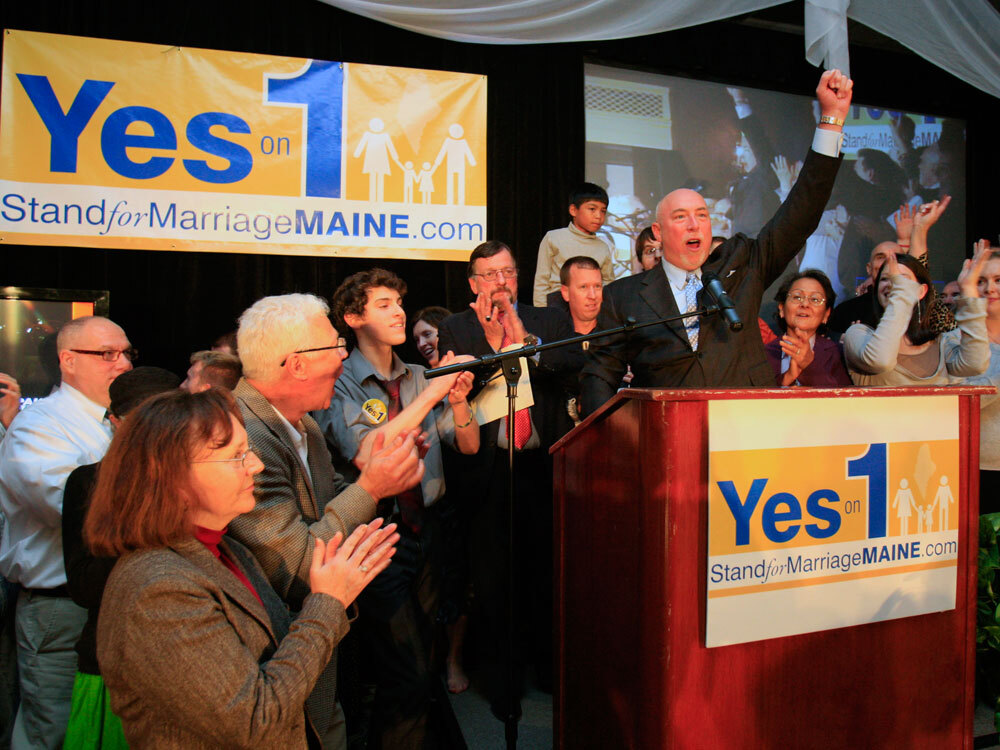 But Connolly has said that same-sex marriage opponents deceived voters into thinking gay marriage and gay sex would be advocated and taught to students at public schools, even though Maine's attorney general and education commissioner said there was nothing in the law that related to school curricula.

For 14-year-old Sam Putnam and his family, the campaign has been a personal and gratifying one no matter the outcome. Putnam was thrust into the spotlight last spring when he chose to testify on behalf of his two moms at a public hearing.

His testimony was put on YouTube, and before he knew it, he was being asked to appear in a television advertisement.

"I talked about how I'm an average teenager, which I am," Putnam said.

"I play sports for my school. I have a lot of friends. I'm an honor student. I participate in the community as much as I can, and no matter what happens tonight," Putnam said earlier in the evening, "it's not going to change me as a person at all. It's just going to change the way my family is being seen."

Putnam said he's willing to wait a while longer for his two moms to be recognized the way he'd like.

But Maine Gov. John Baldacci said that day is coming.

"We may not get there as soon as I'd like to get there," Baldacci said. "But we're going to get there because that's the future."