Accessibility links
Smugglers In Iraq Have A New Trade: Corpses Stalled for 30 years by invasion, war and rebellions, the flow of corpses from outside Iraq to the Shiite holy cemetery in Najaf has resumed. But plenty of risk remains as traffickers share the country's borders with drug smugglers and other criminals — a price they're willing to pay for the hefty compensation. 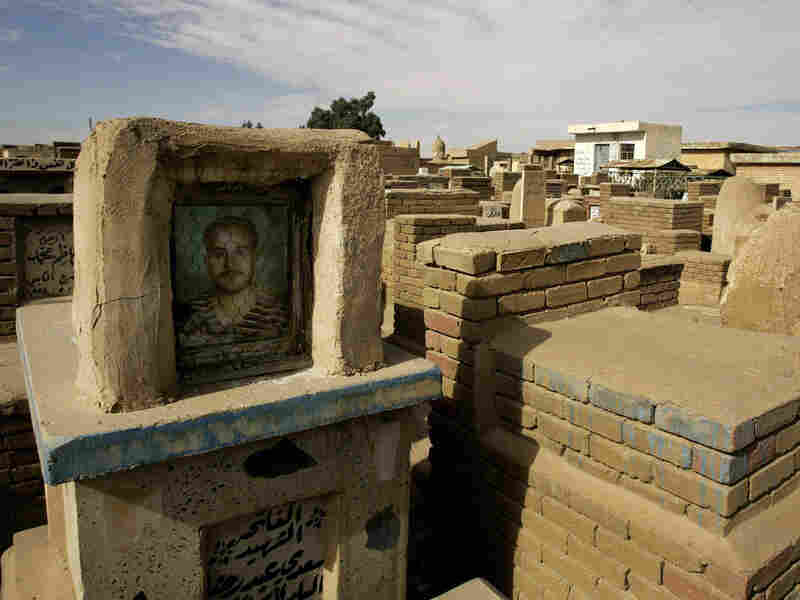 A tomb at the cemetery of Najaf in 2008. The Wadi al-Salam, or Valley of Peace, in Najaf is one of the largest cemeteries in the world. Millions of Shiite Muslims over the centuries have been brought here for burial from all over the world. Joseph Eid/AFP/Getty Images hide caption 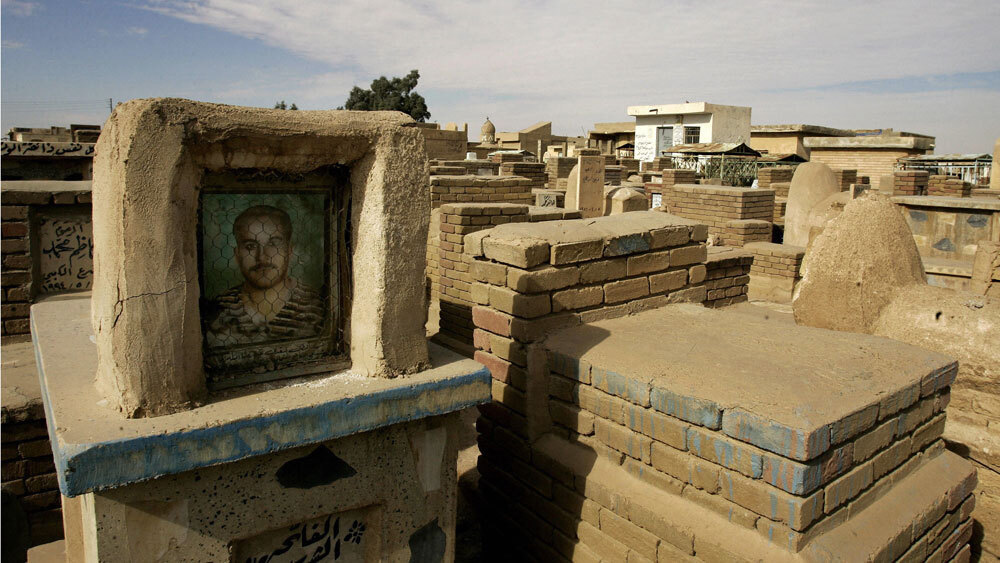 The cemetery of Najaf in 2008. The Wadi al-Salam, or Valley of Peace, in Najaf is one of the largest cemeteries in the world. Millions of Shiite Muslims over the centuries have been brought here for burial from all over the world.

Iraqi and U.S. officials have expressed concerns about the traffic of weapons and drugs across the country's porous borders, but there is also an older and more surprising commodity being smuggled into Iraq — cadavers.

For centuries, Shiite Muslims from all over the world have sought to be buried in what might be the world's largest cemetery, in the holy city of Najaf. During the past 30 years of rebellions, invasion and war with Iran, the traffic of the dead was halted. But it is now a big business once again.

Receiving The Dead In The Valley Of Peace

The cemetery in Najaf is called the Valley of Peace, though for the living it is crowded, dusty and almost always echoing with the sounds of grief.

The tombs and crypts extend for miles in every direction. The cemetery is large enough that different Shiite political factions in Iraq have their own sectors, each spanning several city blocks. Family members sing prayers over the dead and spill water onto the new graves.

As long as there have been funerals here, there has been an industry to receive the dead and their families. Dakhil Shakir, 80, has spent his lifetime in the cemetery. His earliest memories are of helping his father and grandfather with the business of funerals and burials. 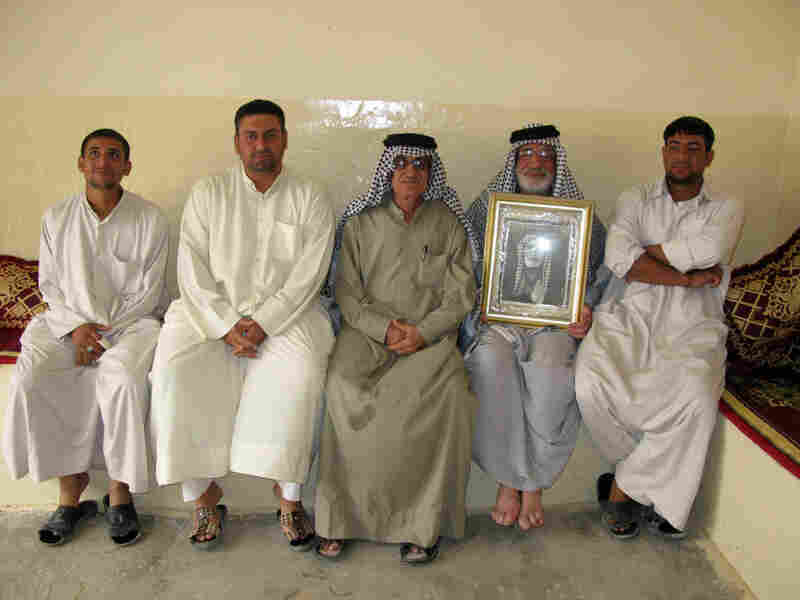 Five generations of Dakhil Shakir's family have worked in the funeral trade in Najaf. Shakir, 80, holds a photograph of his father alongside his sons and brother (center). Quil Lawrence/NPR hide caption 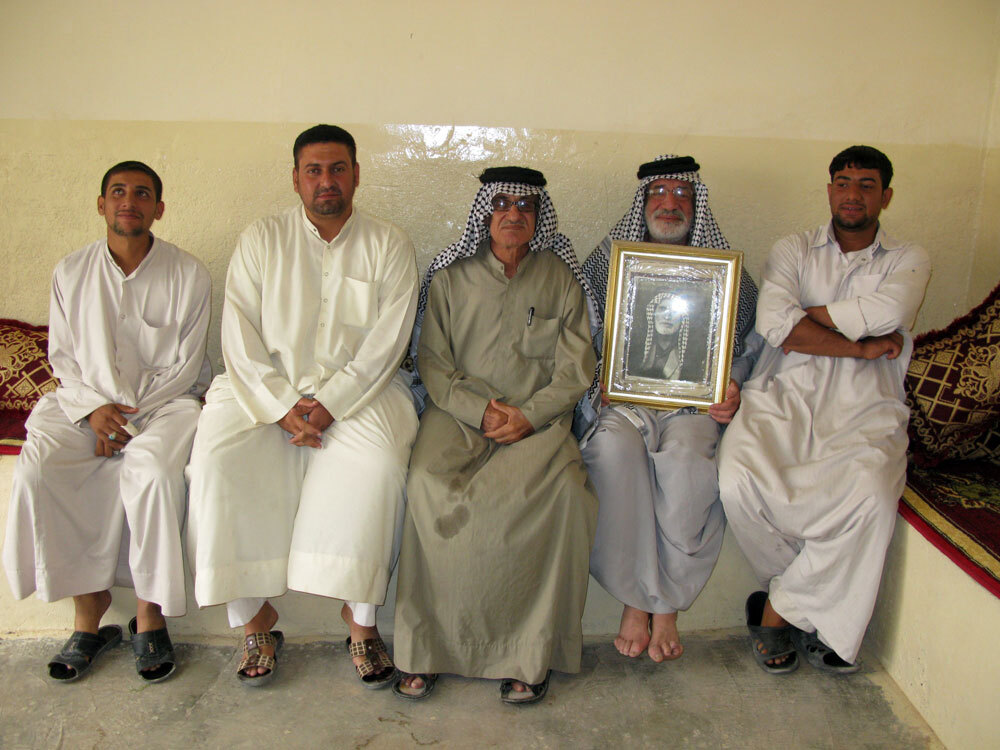 Five generations of Dakhil Shakir's family have worked in the funeral trade in Najaf. Shakir, 80, holds a photograph of his father alongside his sons and brother (center).

Shakir can count back his family's five generations in the trade. He is nearly blind now and despite his thick plastic glasses, he calls out to ask which of his sons are in the room with him. They will bury him someday, he says, and then carry on the business.

Shakir recalls that when he was a boy, desert caravans brought the dead to Najaf.

"They used to bring the dead on mules," Shakir says. "A mule would carry two bodies, with five mules in the caravan. I have seen that with my own eyes. They would stay here for a few days, and we used to offer them a place to stay, and later, they would set off back home."

As early as the 16th century the transport of Shiite corpses from as far as India was big business. The Ottoman Empire taxed and regulated the trade, as did the first governments of modern Iraq. Most of the coffins came from Iran, the majority Shiite state that shares hundreds of miles of border with Iraq. Sometimes the bodies would be buried a few years in their home country and then transferred to Najaf. In later years some even came by airplane.

The trade ground to a halt with the Iran-Iraq war of the 1980s and then Iraq's invasion of Kuwait in 1990.

Today, it costs thousands of dollars in taxes and fees to transfer a body legally to Najaf. Only the rich can afford it, says a man who should know. He is a corpse smuggler who does the job for less, and he only agreed to give an interview if his name was withheld. Afraid of the harsh punishments for smuggling, he wouldn't even receive journalists in his lavish home in Najaf.

"Smugglers from Iran and Iraq organize the operation," the smuggler says. "They meet on dark nights by small rivers and marshes between the two countries. They bribe the guards, and the bodies cross the border."

Sneaking across such a tense border in the dark puts the smugglers in some seriously bad company. Drug runners use the same routes, as do traffickers in all sorts of weapons and explosives, bound for militias or criminal gangs.

But the smuggler admits that the money is good, which explains why anyone still takes the risk. The authorities are not lenient. The smuggler says they recently jailed an entire funeral party — the family, pallbearers and hearse driver — on suspicion that the body was illegally trafficked from Iran.

Still, the valley of peace grows, regardless of how far the caskets have traveled, and whether they flew here from Lebanon, or were smuggled from Iran, or were carried a short distance from Iraq's latest tragedy. Najaf's undertakers continue their trade as their great-grandfathers did before them.