Accessibility links
Halftime Is A Warm-Up Act For Marching Bands For Sunset High School's band, Friday night games help prepare for Saturday competitions. That's when band parents and friends cheer for these champions from Portland, Ore., as lustily as football fans and when judges rate musicianship and movement.

When we began our high school football series, Friday Night Lives, many listeners wrote in and suggested a story on marching bands. They are, after all, as much a part of the Friday night culture as anything.

Homecoming night might be a big deal for the football team, but for the Sunset High School marching band in Portland, Ore., it's a mere dress rehearsal. Saturday band competitions are the big shows. That's when band parents and friends cheer as lustily as football fans do at the homecoming game and when judges rate musicianship and movement. (You try playing a flute quick-stepping across the field.) 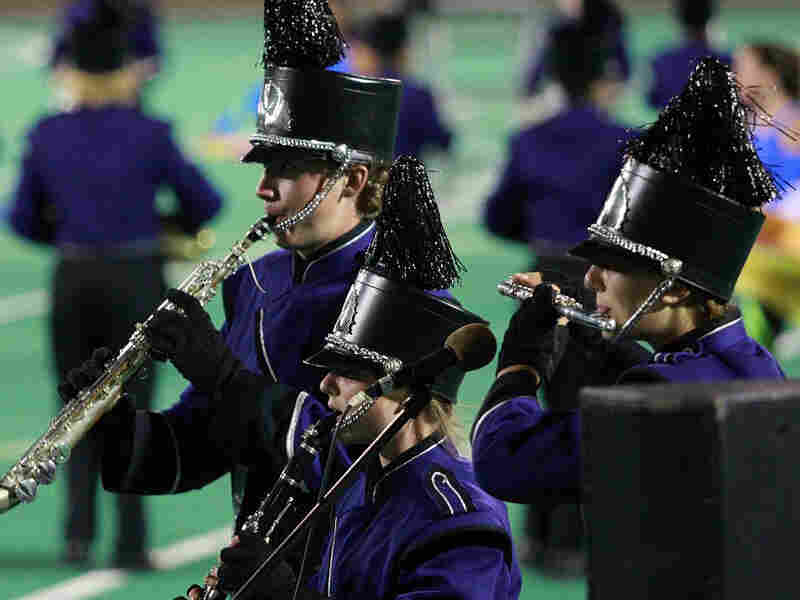 Woodwinds play during a performance of the Sunset Apollo Marching Band and Auxiliary in October. Kevin Dunder hide caption 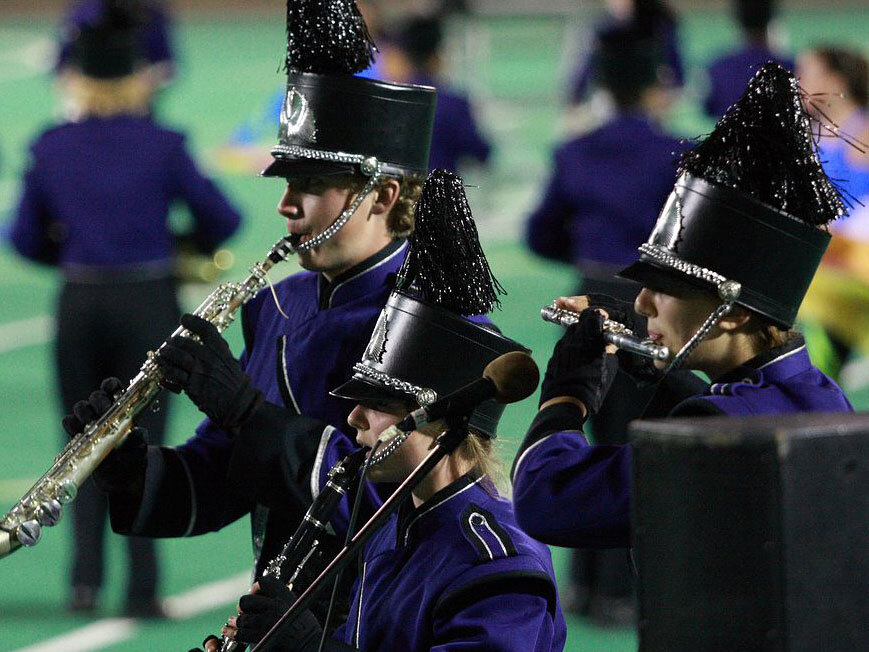 Woodwinds play during a performance of the Sunset Apollo Marching Band and Auxiliary in October.

Precision is expected at Sunset, since the Sunset Apollo Marching Band and Auxiliary is the reigning Northwest Association for the Performing Arts AA champion.

It may seem like marching bands and football teams have little more in common than the turf they both practice and play on. But according to band director Greg Hall, football coaches and band directors share the same mission.

"We're teachers. Much like there's an offensive line, we have woodwinds, we have brasses, we have percussion. And, we're trying to teach our kids how to soar to their potential. Mine just happens to be music," Hall says.

It's a nice thought, football and marching band of the same ilk, separated only by shoulder pads and trumpets. But even Hall, who played high school football once upon a time, knows about the perception of the great social divide.

As part of our Friday Night Lives series, we are documenting the people behind the game and the rituals that surround it. What food serves as a game appetizer? What's the special song the players listen to before heading out to the field?

"Kind of nerdy perhaps. Not in the in crowd," Hall says.

But maybe that's not the case anymore. The band members he directs at Sunset are in school government. They're athletes and top students — although there are those certainly who march to a different ... sax.

"We're just kinda goofy," says band member Brian Whitney. Whitney is the saxophone section leader, where he says, they are notorious for their bad work ethic.

"It is a challenge to get this section to actually get good music out on the field sometimes," Whitney says.

At the homecoming game, the band gets only 10 minutes for its halftime performance, but it's well-received. The 88 members include musicians and color guard — the people waving huge flags and doing choreographed moves with fake rifles and sabers. As the football players reclaim the field, the band hustles off and gathers in a big circle with band alumnus and assistant Brian Fitzsimmons in the middle.

"It was good; it wasn't great. A lot of foot-timing issues. Wasn't the best show," Fitzsimmons says. We're gonna hit it hard on Monday, gonna make sure you guys are set for competition next weekend."

The different sections meet for their own spin-down sessions. Whitney talks to his saxophone players — the goofy guys — then finishes by telling them to lay down their instruments on the ground. He then thrusts his arm into the air and screams. 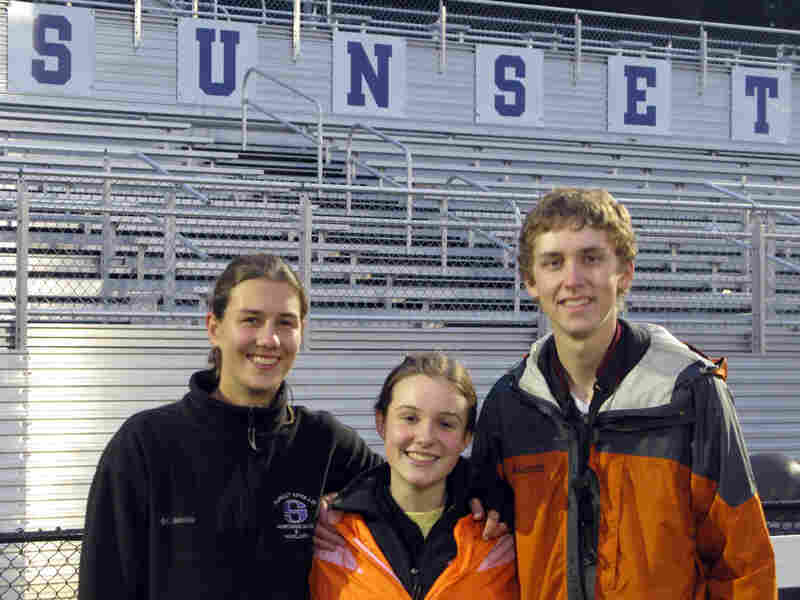 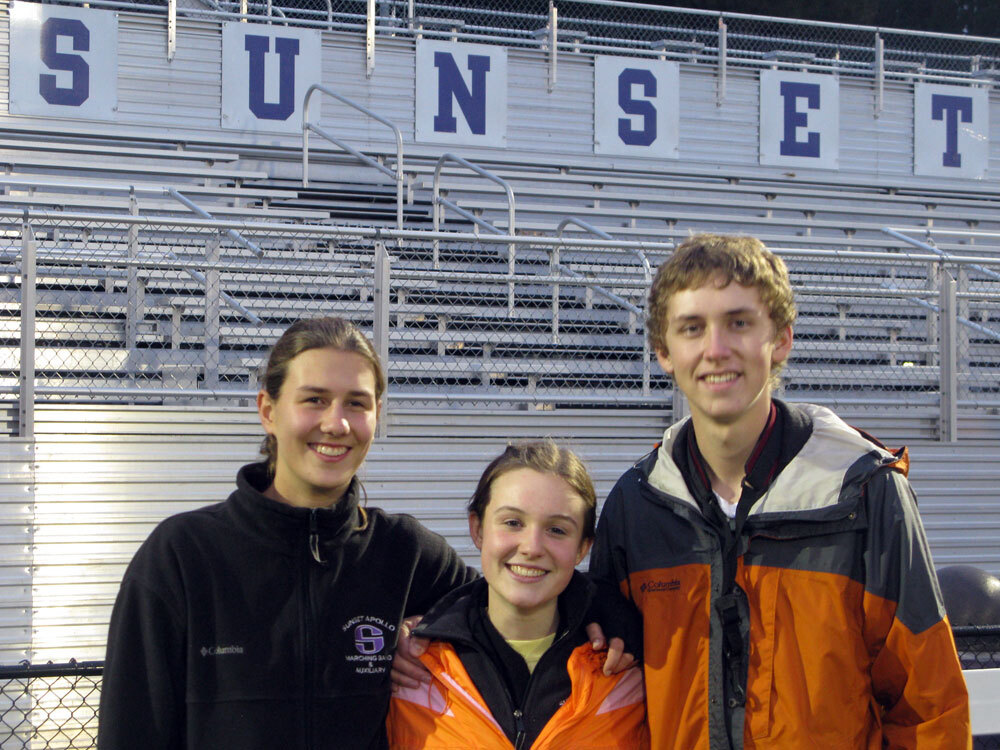 He waits for a few seconds as the section members copy his stance.

"Heroic pose over! All right guys!"

After their heroic pose, the saxes follow other band members back to the band room to change. Many then will leave and miss the second half of what ends up being a 37-0 Sunset loss.

There are victories to prepare for at the next band competition — where it's certain someone will wear a T-shirt with the message that gets knowing chuckles in the band community: I look forward to the day when football is played at halftime.

Step 2: Upload pics you'd like to share with the Friday Night Lives group. (If you're having trouble uploading, consult Flickr's help guide.)

Step 3. Go to the Friday Night Lives group and click "join this group." Confirm your membership.

Step 4: Find a photo from your collection that you'd like to add to the group. Between the title of the photo and the photo itself, you'll see a series of tabs. Click "Send to Group," then select "Friday Night Lives."