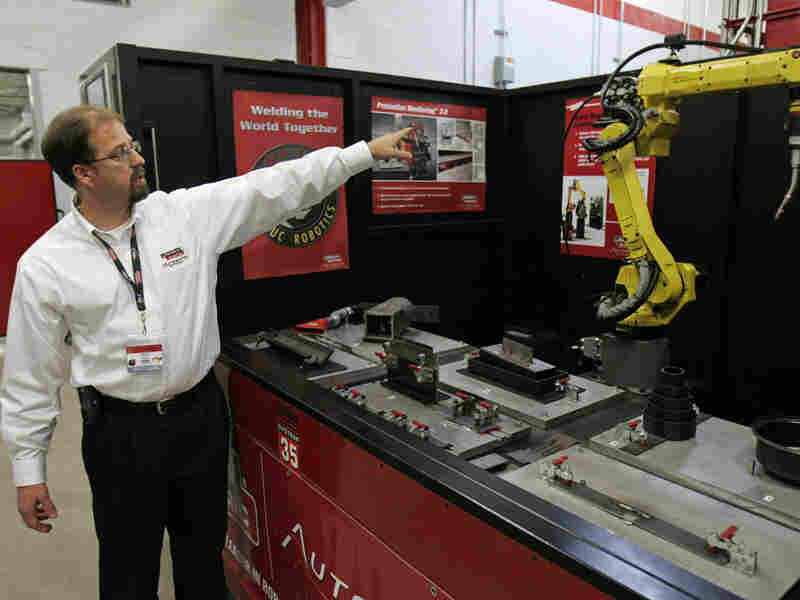 Mike Whan, an automation technologist, demonstrates a robotic welder at Lincoln Electric in 2008. The Ohio-based company is among a select few that operate with a no-layoff policy even during tough economic times. Tony Dejak/AP hide caption 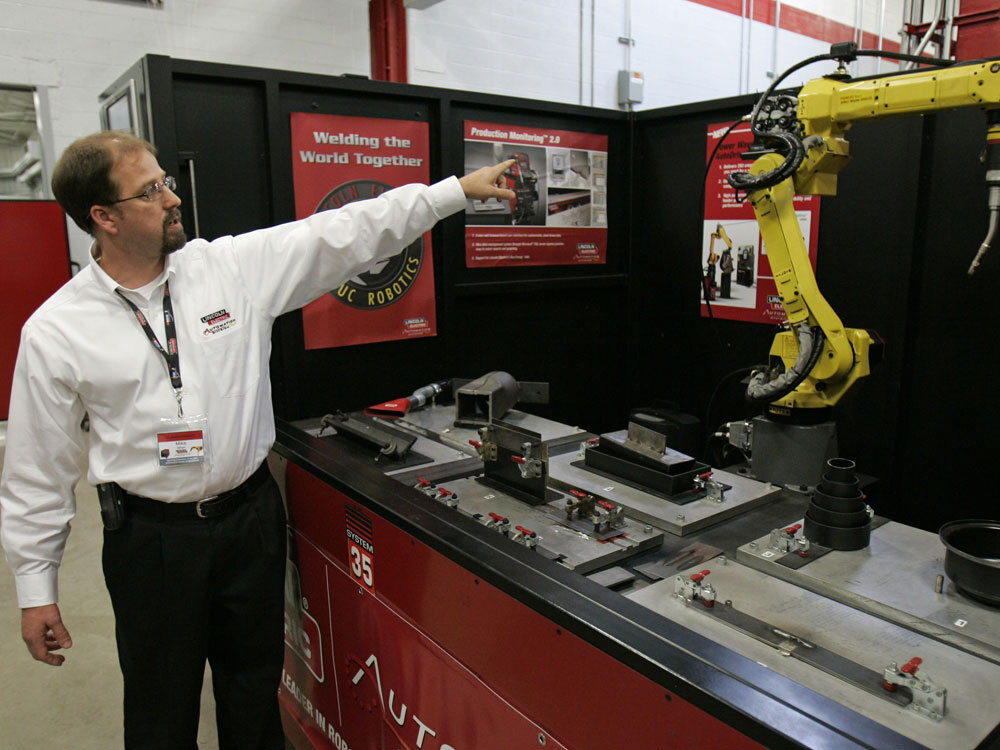 Mike Whan, an automation technologist, demonstrates a robotic welder at Lincoln Electric in 2008. The Ohio-based company is among a select few that operate with a no-layoff policy even during tough economic times.

The Hypertherm factory sits hidden in the woods not far from Dartmouth College in Hanover, N.H.

Inside, in a testing room, a jet of superheated ionized gas slices smoothly through an inch of plate steel.

Jim Miller, vice president of manufacturing, says that when the world is making big heavy things, Hypertherm does quite well. That's because the firm is one of the top manufacturers of plasma cutting tools.

"Maybe a shipbuilder, automotive — any place you see flat steel, you would see an application for our products," he says.

But late last year, production of ships and cars pretty much ground to a halt. And sales of cutting systems at Hypertherm dropped 50 percent.

How many workers did the company lay off? None.

It put them to work doing other things. While layoffs remain a reality in this economy, a few firms — as a matter of policy — refuse to lay off a single employee.

Normally, Lindsey Grace works on the production floor at Hypertherm. Now, she rakes leaves and maintains the grounds.

"In the beginning, I was really scared to lose my job," she says. "Now I have the opportunity to do something different — to help the company out."

Hypertherm saves money by doing everything in-house that it possibly can. Plus, it puts workers into training or assigns them to teams to rejigger the production line. The goal is to emerge from recession in a better position to compete.

Dick Couch, the company's founder and chief executive officer, sees no tension between looking after the interests of employees and keeping the company afloat.

"Once you have a highly skilled workforce, the last thing you want to do is lay them off," he says. "This isn't altruism. It's good business."

Couch says that if he were making T-shirts, this strategy would fail. High-end products and experienced workers go hand in hand.

Very few firms fit this mold, but Hypertherm is not alone. The granddaddy of the no-layoff companies is Lincoln Electric in Cleveland. The maker of welding systems has been around for well over 100 years. It's a global company with more than $1 billion in sales.

Lincoln Electric CEO John Stropki says people considering this model need to go into it with their eyes wide open.

Managers give up the flexibility to hire and fire as they please. Workers give up a guaranteed paycheck. Profit sharing is a big part of the model. When business is good, pay goes up. When it goes down, so does your pay. At Lincoln Electric, the workweek shrank to 32 hours.

"Union leaders were very, very suspicious of this," he says. "They saw this as a tool for exploitation, and there's no question that in some work environments, it probably was."

But Koller says that today, workers at these companies do well. The typical Lincoln Electric assembler can make more than $70,000 per year. Jordan Siegel, an associate professor at the Harvard Business School, says the American economy would benefit if more firms adopted this model of shared gain and shared sacrifice.

Siegel has been doing work in South Korea, where the recession had little impact on unemployment. "There has been this shared sacrifice, people sharing some reductions in compensation, in order to avoid layoffs."

If these overseas and domestic firms are so profitable, why don't more companies jump on board? Siegel says it's mainly because the idea is too different. He hopes the recession prompts more executives to take off the blinders and consider the no-layoff option.