Accessibility links
Indie Rockers Rally Around One of Their Own Think of indie rock, and you might think of angry, cynical musicians railing against a materialistic world. Not so when one of their own is at risk: In September, Baltimore musicians J. Robbins and Janet Morgan learned that their 9-month-old son had been born with a motor neuron disorder called Spinal Muscular Atrophy. The response from their colleagues has been overwhelming.

Listen
Indie Rockers Rally Around One of Their Own 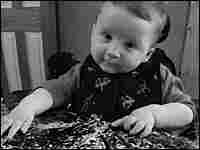 Callum Robbins was diagnosed in September 2006 with Spinal Muscular Atrophy. His musician parents have since been spreading the word about the condition — and their colleagues have scrambled to help make sure treatment costs don't bankrupt the family. Courtesy J. Robbins and Janet Morgan hide caption

On a recent night, a Washington, D.C., club was packed for a reunion show by the Dismemberment Plan. For fans of independent rock, the reunion was a big deal. For the band, it was a chance to show support for their former producer.

J. Robbins is probably best known to indie-rock fans as the singer and guitarist in the band Jawbox. Today, he spends most of his time producing. He operates a small recording studio in Baltimore, and he and his wife, Janet Morgan, also play in a band called Channels.

At a picnic last fall, the couple noticed that their son, Callum, wasn't moving around as much as the other kids his age. So they took him to see a doctor, who returned a devastating diagnosis: Callum has Spinal Muscular Atrophy, a disorder caused by the near-absence of a protein that helps the brain communicate with the body.

SMA's primary symptom is an overall weakness, but that can play out in a number of ways. In the worst cases, newborns can have trouble breathing and swallowing. For older children, says Callum's doctor at Johns Hopkins Hospital, the biggest threat comes in a chain of vulnerabilities: Underdeveloped trunk muscles lead to a small ribcage, which results in low lung capacity, which means a cough can more easily turn into pneumonia. Or, life confined to a chair can lead to a curvature of the spine and scoliosis.

"Intellectually, he won't be affected," Robbins says. "He stands a very good chance of being a really bright, sociable, awesome guy. But he's not gonna be mobile."

Some people with less severe types of SMA live into middle age. But 95 percent of babies diagnosed with Type 1 SMA don't live to see their second birthdays. Callum's diagnosis, according to the specialists at Hopkins, is Type 1.

"I remember that being completely crushing," Morgan says. "It was a double bomb."

Morgan stays at home, and Robbins has adjusted his schedule to accommodate Callum's physical therapy. But an indie-rock producer's income doesn't leave them a lot to work with. The family pays for their own insurance, but realized early on that the expenses could still bankrupt them.

That's where Kim Colletta came in.

Colletta is a longtime friend of Robbins' and Morgan's, but she's a friend with connections. Coletta and her husband played in Jawbox with Robbins, and now run DeSoto Records. They posted a notice about Callum's illness on the label's Web site and asked for help through a link for donations.

"I knew they would never do it themselves," says Colletta. "And I wanted, as a friend, just to help them out that way."

The response was instantaneous.

"I remember waking up the next morning and checking the amount in the PayPal account, realizing these are people whose names I don't know anymore," Colletta recalls. "I started getting e-mails saying, 'We'd like to do a benefit show in Chicago, Los Angeles, Portland, Boston ... "

For Robbins and Morgan, two people who had given their lives to independent rock, indie rock was giving back. At the benefit reunion in D.C., the Dismemberment Plan's lead singer, Travis Morrison, said that Robbins gave the band guidance when they were just kids.

"He's a spiritual beacon for me," Morrison told the crowd from the stage. "And so, I don't know — this is kismet. We had to play this show."

At the show — the first benefit Robbins and Morgan have been able to attend — the couple set up a table to take donations for an SMA charity. They've also started a blog charting Callum's progress, with links to half a dozen other SMA Web sites. Their lives now balance outreach with therapy for Callum and — because he's so vulnerable, says Morgan — a necessarily guarded existence at home.

"We don't want him to grow up in this bubble," she says. "We want him to experience life. But I don't feel like it's appropriate to pick up the phone or send an e-mail saying, 'Can we join your group, and by the way, is anyone sniffling today?'

"So on that level, we spend a lot of time on our own with him. Hanging out at the house, walks through the park, feeding the ducks. All pretty normal stuff."

Since Callum's diagnosis last September, the family has had to deal with setbacks. But Callum has responded well to some of the treatments, and his parents say that through all the difficult times, his good nature has been a constant.

Next week, Callum celebrates a milestone: He turns 18 months old.

For Robbins and Morgan, the burden of coping with Callum's condition has been lightened by the efforts of a community that has long come together to support its own.

In a blog entry for his son's first birthday, J. Robbins wrote: "I don't see how Callum will ever grow up to be a properly cynical punk rocker, since he is already experiencing undeniable proof that at least some people are essentially good at heart."