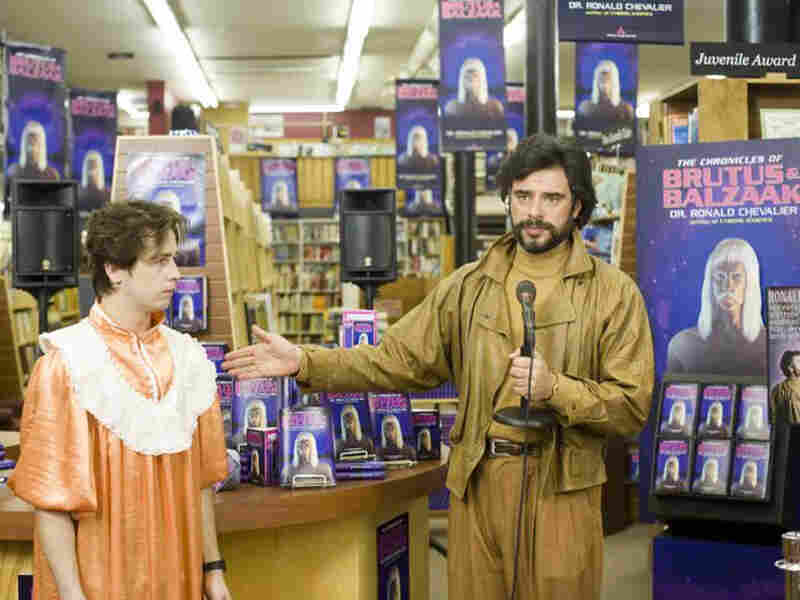 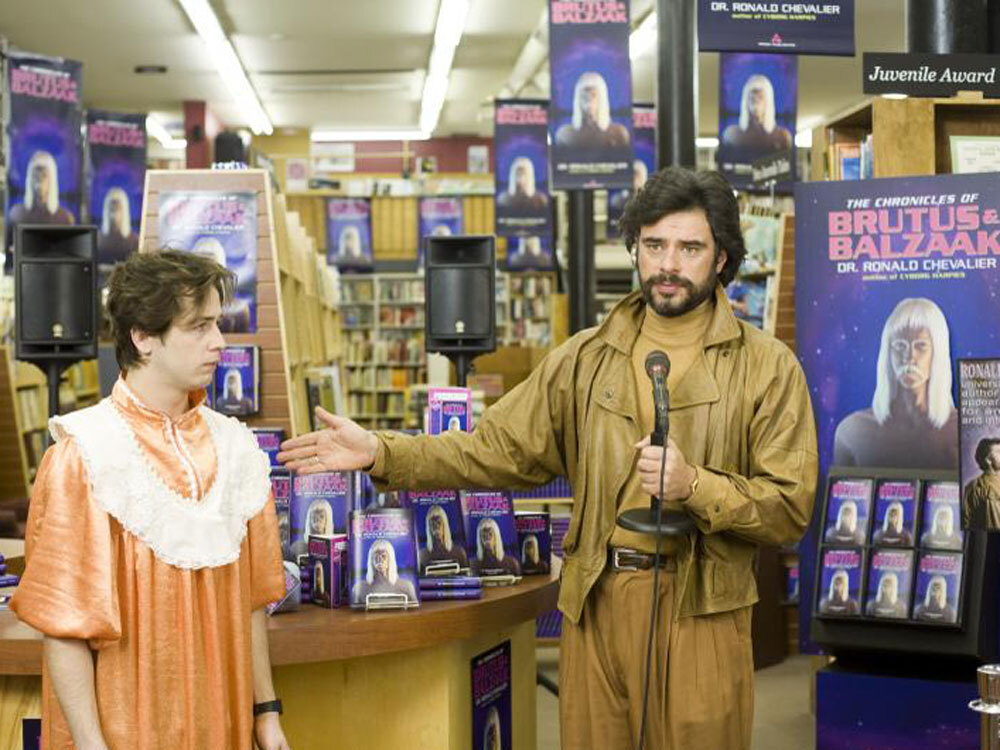 Gentlemen Broncos centers on a sci-fi geek (Michael Angarano, left) and the famous writer (Jemaine Clement) who steals his story.

'He Stole My Story'

I don't think there has ever been a comedy as freakishly, surreally psychosexual as Jared Hess's Gentlemen Broncos. It's the story of a teenager who writes unpublished Dune-like sci-fi novels called Yeast Wars in which the hero has his gonads stolen and faces off in a rocky desert against laser-blasting mammaries.

The kid, Benjamin, played by Michael Angarano, is clearly sublimating like mad to relieve his sexual discomfort. But often Hess cuts to his fantasies — scenes from his novels enacted onscreen — and they're so visionary and intense that they hurtle past Freud. They have a Jung-like mythical dimension. His protagonist, Bronco, played by Sam Rockwell, is part cowboy, part Flash Gordon. His battles are gloriously tacky and psychedelic. He rides robotic deer and dodges Cyclops and pursues a jelly jar with his pilfered private parts. These fantasies lift the movie into a realm both lofty and madcap. The down-to-earth realm is loco in a different way.

Hess co-wrote and directed Napoleon Dynamite and the Mexican wrestler comedy with Jack Black Nacho Libre, and at times he uses deadpan like a cudgel. Geeky characters stare off screen with their mouths hanging open. They're uncomfortable in their own flesh. Benjamin is home-schooled and awkward around people. He moves through the world on the verge of tears, looking as if he wants to will his own body out of existence. I've never seen a teen hero so stricken. His mom is the wonderful actress Jennifer Coolidge, who is comically full-figured yet plays a character who is trying to become a designer with a line of ultra-modest nightgowns — while Benjamin's own work explodes with sex and violence.

When Benjamin leaves his dome house to travel to a convention of young would-be fantasy writers, he gets to meet his author hero, Dr. Ronald Chevalier, played by Jemaine Clement of Flight of the Conchords. Even if you love Clement on TV, you'll be unprepared for his brilliance here. He wears a dark, heavy beard and speaks in the toasty tones of James Mason's Captain Nemo. He gives a lecture on how to name one's characters, then calls on Benjamin, who is bewildered by his role model's fatuous pomposity.

Gentlemen Broncos finally turns on the theft of Benjamin's work. Chevalier steals his manuscript — inserting, of course, his own ridiculous character names and turning Bronco into a transvestite. We see scenes from his Yeast Wars acted onscreen, and they're even more bizarre than Benjamin's. Then a girl named Tabitha, played by a hilariously deadpan Halley Feiffer, pays Benjamin to use Yeast Wars as the basis for a threadbare soft-core bodice-ripper movie directed by her friend Lonnie (Hector Jimenez), whose mouth is a rictus of lust. Nutty and campy as all this is, there's a serious theme. Vastly disparate sexual issues are being worked out through these outlandish fantasies. Each vision is different — and in the end, Benjamin has to stand up like any artist and fight for his own vision.

Some of Hess' gross-out gags are heavy-handed; the grotesquery is laid on too thick. His work is best when he doesn't force it, when he lets you observe, casually, his menagerie of weirdos. But Gentlemen Broncos is a leap over his previous work. Now, Hess doesn't just gaze on paralyzed nerds from the outside; he takes you into their heads and gives form to their alienation from the physical world. Hess is a Mormon, from a famously modest culture, yet he's clearly inspired by David Lynch: Even his flattest images teem with creepy undercurrents. I was always on the verge of either laughing or squirming, sometimes both at once. Let's call that verge Hess Country, where even your tackiest dreams can take flight.