Accessibility links
Flu Threat Looms As Mecca Readies For Pilgrims The H1N1 virus is a major concern for Saudi Arabian authorities, who are gearing up to host millions of Muslims on the annual pilgrimage to Mecca. Health officials are making recommendations and monitoring pilgrims, but otherwise can do little to mitigate the virus' spread. 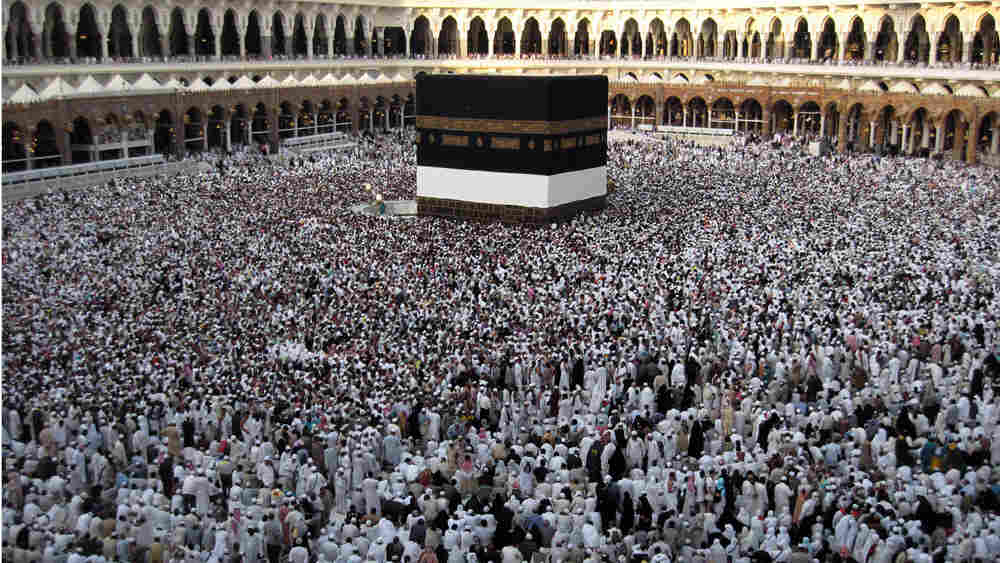 Hundreds of thousands of Muslim pilgrims circle the sacred Kaaba stone at Mecca's Grand Mosque in December 2008. Saudi Arabian authorities are concerned about the effects the H1N1 pandemic will have on this year's pilgrimage. Khaled Desouki/AFP/Getty Images hide caption 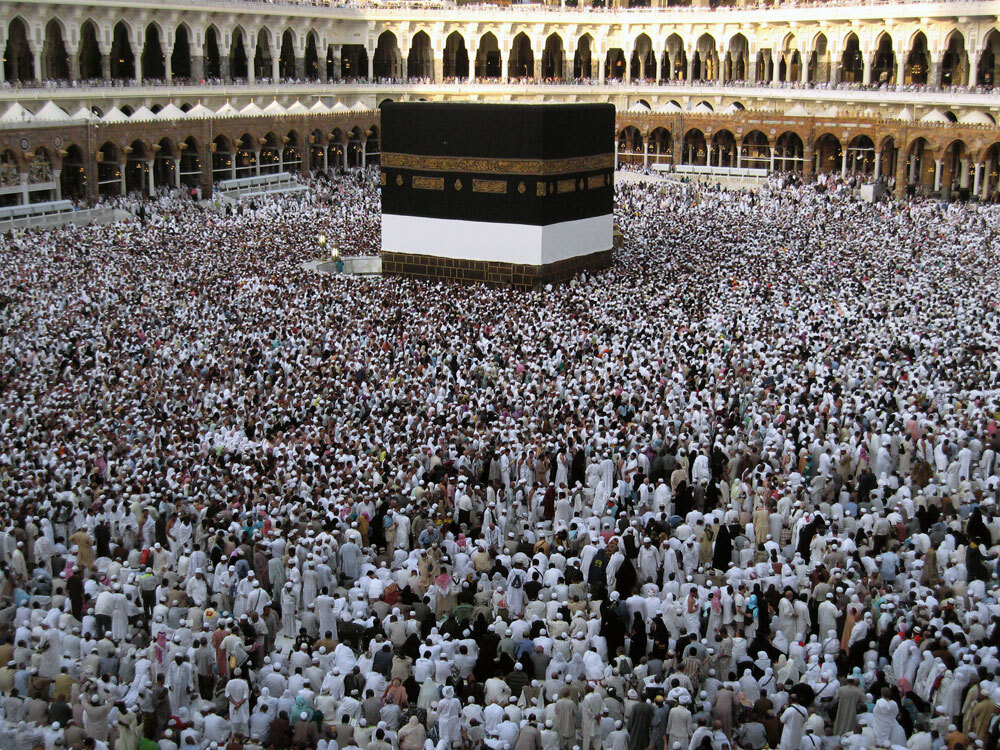 Hundreds of thousands of Muslim pilgrims circle the sacred Kaaba stone at Mecca's Grand Mosque in December 2008. Saudi Arabian authorities are concerned about the effects the H1N1 pandemic will have on this year's pilgrimage.

Anxious health officials in Saudi Arabia say that for the first time in recorded history, a global pandemic could affect the hajj, the annual Muslim pilgrimage to Mecca. The H1N1 virus is a major concern for authorities in Saudi Arabia, who are gearing up to host some 2.5 million Muslim pilgrims from 160 countries later this month.

Muslims from around the world have been coming to Saudi Arabia for hajj for more than a millennium. It's one of the five pillars of Islam. Every Muslim who is able is supposed to make the journey to Mecca at least once in a lifetime.

Non-Muslims are not allowed into Mecca. But there are plenty of hajj videos online that show how tightly packed the worshippers get. One video, for instance, shows thousands and thousands of people circling the sacred stone known as the Kaaba.

This proximity is exactly the problem, says Dr. Shahul Ebrahim of the U.S. Centers for Disease Control and Prevention.

"There is no space in between the persons. They stand shoulder to shoulder, touching objects of religious significance," he explains. He adds that when Muslims pray, they prostrate on the ground, touching the carpets or floors — another way they might come into contact with bodily fluids.

Goal Is To Mitigate Spread Of Virus

Ebrahim, in Saudi Arabia to consult with the country's health officials, says it is more difficult to restrict people's movements during a huge religious ceremony like hajj than it was in Mexico, when the first big wave of H1N1 appeared.

"What happened in Mexico City was to close churches, to prohibit or limit the number of people attending funerals or people going to restaurants. The entire hajj is against all those principles," he says. 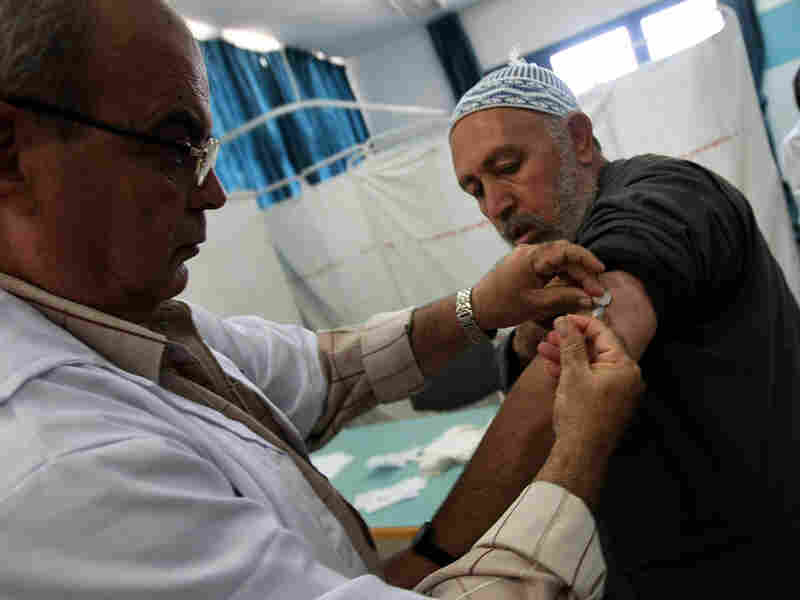 A Palestinian man who has registered to make the hajj gets a flu shot at a medical center in al-Shati refugee camp in Gaza City on Sunday. Saudi Arabian health officials have asked pilgrims to be vaccinated against ordinary and H1N1 flu before making the annual pilgrimage. Mahmud Hams/AFP/Getty Images hide caption 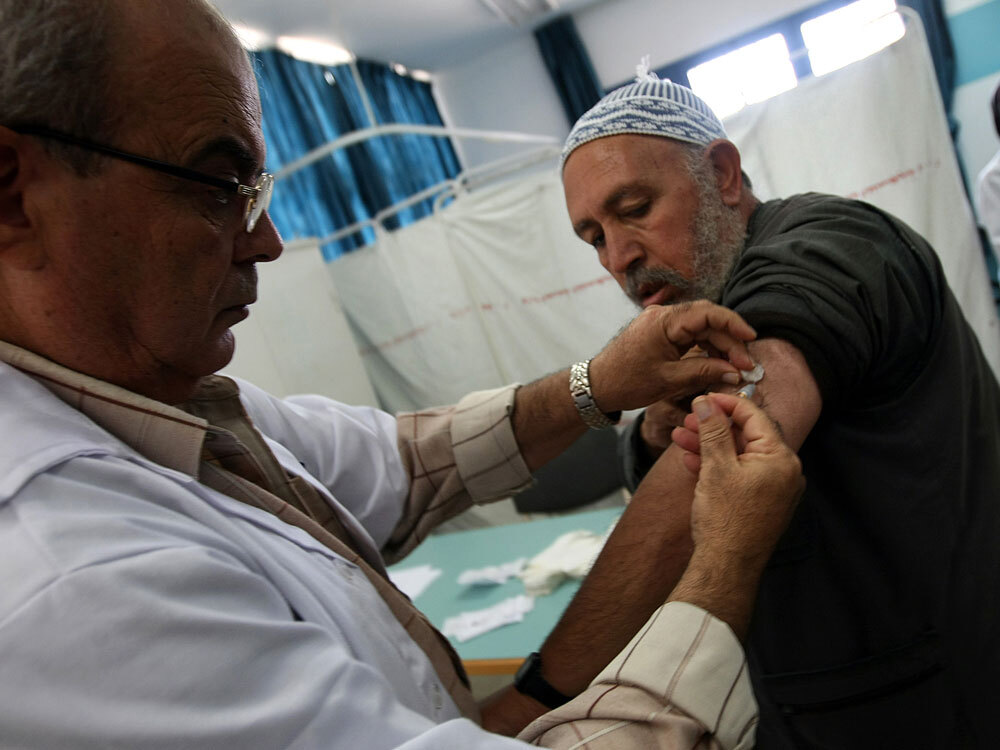 A Palestinian man who has registered to make the hajj gets a flu shot at a medical center in al-Shati refugee camp in Gaza City on Sunday. Saudi Arabian health officials have asked pilgrims to be vaccinated against ordinary and H1N1 flu before making the annual pilgrimage.

In other words, churches and schools can be closed; the hajj can't.

"If it has never been done in 1,430 years, I don't think anybody is prepared to call for that [now]," Ebrahim says.

Instead, the goal is to mitigate the spread of H1N1. The Saudi government is offering the H1N1 vaccine to health care workers, security forces and anyone else working on the pilgrimage. And officials recommend that pilgrims be vaccinated at least two weeks before leaving their home countries.

But many countries cannot afford that. Only a handful, such as China, have pledged to comply. Saudi officials also say pilgrims over 65 and under 12 — and those who are pregnant or sick — should stay home. Dr. Ziad Memish, the Saudi deputy health minister, stresses that these are recommendations, not requirements.

"We've made it clear that the Kingdom of Saudi Arabia will not turn anybody away. So anybody who comes in, after he has been cleared by his country, then we'll take care of them," Memish says.

That means pilgrims who come by sea or by air will be greeted by health inspectors as soon as they arrive.

The Red Sea port of Jeddah is the gateway to the pilgrimage. At the Jeddah airport, there is a separate terminal just for pilgrims. Thousands are arriving every day.

At arrival, they are sent immediately through a heat sensor that screens them for a fever. If they have a fever, they are kept at the hajj terminal until that fever disappears.

If they don't have a fever, Memish says, the pilgrims will be given packets with masks, hand sanitizer and information about H1N1. If they later contract symptoms during hajj, they'll be given anti-viral medications but won't be isolated.

But pilgrims at a gas station and rest stop on the road from the hajj terminal to Mecca don't seem to be too concerned about H1N1. On this day, one bus is full of mostly elderly pilgrims from Bangladesh. They are not wearing masks, nor are they carrying hand sanitizer.

Maoud Abshel-Jawan, 74, says he saved up his entire life to make the hajj. He says he was screened at the airport and allowed through.

"I have no cough, any problem," he says, adding that he does suffer from diabetes.

Saudi health officials say they worry most about sick and elderly pilgrims like Abshel-Jawan — people likely to spread the flu here, or worse, take it back home with them. But they are also the same people Saudi officials say they simply can't turn away.