Accessibility links
With A Nerve Freed By Surgery, A Facial Pain Ends Sandra McGee suffered for years from debilitating facial pain — even a smile could trigger it. Like many with a rare condition called trigeminal neuralgia, she was told she needed a root canal. But what she really needed was a surgery pioneered by UCLA. 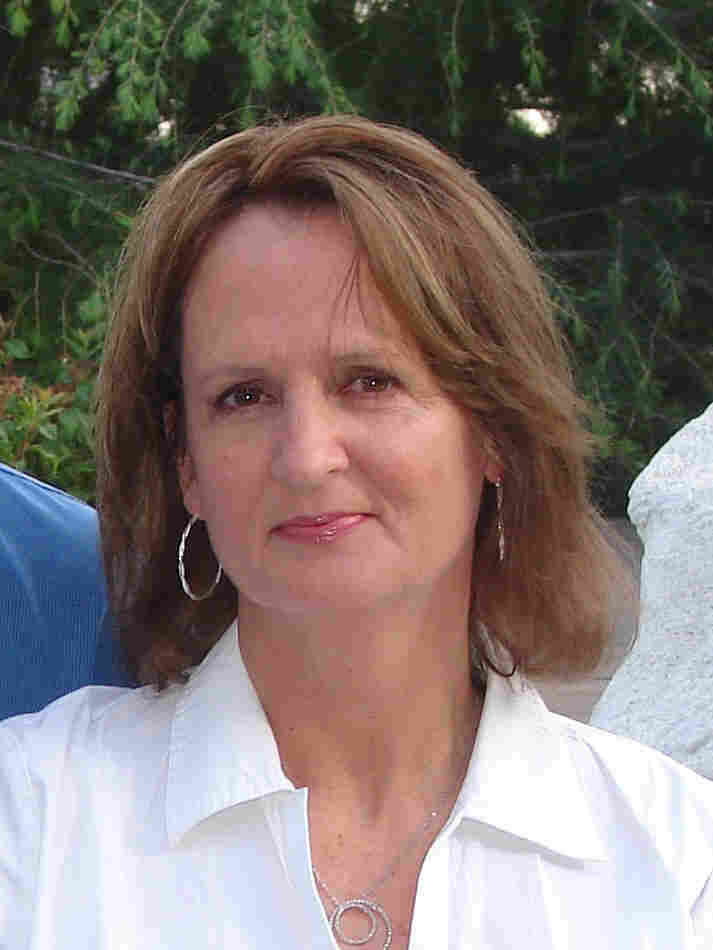 Trigeminal neuralgia is a rare condition that causes pain so intense it used to be known as the suicide disease. And people who get it usually have vivid memories of their first severe episode.

Sandra McGee was in the shower when she felt something like an electric shock on the right side of her face.

"I just jumped up, you know, fell against the wall and started screaming because I was being electrocuted," she says.

The pain started about an inch above her upper lip, McGee says, and traveled up to her right eye. The episode lasted about 45 seconds

McGee, 51, lives in the Los Angeles area and works as a cake decorator at Costco. She says that before she had trigeminal neuralgia, she was a pretty happy person.

That changed as the flashes of pain became more frequent and she realized they could be triggered by almost anything: a gentle touch, a drop of water on her cheek, even a smile.

"I couldn't be happy. I couldn't be sad," she says, because those emotions required facial expressions that might cause excruciating pain.

UCLA's Department of Neurosurgery take you through the surgery they performed on Sandra McGee to cure her trigeminal neuralgia. (Edited for length)

Trigeminal neuralgia is rare, affecting about one out of every 15,000 people.

But when it does strike, it can be devastating, says Dr. Neil Martin, the chair of neurosurgery at UCLA.

"In years past when we didn't have effective treatments, it was severe enough that some patients would commit suicide to escape the pain," Martin says.

The pain comes from the trigeminal nerve, which carries sensory information from the face and scalp to the brain.

There's a place near the brainstem where the trigeminal nerve can get pinched by a blood vessel. Martin says as the blood vessel expands with each pulse, it exerts pressure on the nerve, gradually wearing away the outer sheath that insulates nerve fibers.

Eventually, the nerve fibers begin to short circuit. "So a normal sensation like touching the face becomes distorted into a tremendous flash of pain," Martin says.

In the 1960s, surgeons at UCLA developed an operation to fix the problem. But many patients still don't get the surgery because doctors attribute their pain to some other cause, like dental problems.

McGee was pretty sure she had trigeminal neuralgia. She had looked it up on the Internet and seen several doctors. But she still agreed to have a root canal redone to see if that would help.

"I took them like every eight hours. And then it got to be like every six hours, then four hours, then three hours," she says. "I was taking way too much."

So a few months ago, McGee decided it was time to try something else. She called her insurance company and asked for help finding an answer.

The company sent her to see Dr. Martin at UCLA.

Martin recalls that when he first met McGee in early August she was having up to 100 episodes a day of "sharp, shooting, stabbing electric-shock-like pain. She was in absolute agony. It was completely disabling."

Martin told McGee that surgery was her best hope for permanent relief.

The surgery still carries risks, Martin says. But it's become steadily safer and more effective over the years.

One major reason is new technologies that create detailed, three-dimensional images of a patient's brain. Those images make it easy for surgeons to plan an operation.

Martin studied a lot of those images before doing surgery on McGee.

A video of that surgery shows him creating a hole in her skull behind the ear, and gently teasing apart layers of tissue as he works his way toward the brain stem.

Within a few minutes he's exposed the problem. A pulsing red blood vessel is wedged beneath the nerve and has actually worn a visible groove in the white fiber sheath.

Martin tugs on the blood vessel and it springs free.

At that point in the surgery, Martin says, he was pretty sure he had solved the problem. But he wouldn't really know until his patient regained consciousness.

McGee remembers that the first thing she did when she woke up was touch the right side of her face. Then she smiled and made other faces. She tried all the things that had triggered pain, "just to see if it was gone," she says, "and it was gone."

Nearly three months since the surgery, McGee says there's not even a hint of the pain that dominated her life for three years.

She expects to start decorating cakes again next week.