Accessibility links
Jobless Rate 10.2 Percent, Casts Doubt On Recovery Little over a week after the government said the economy has begun to grow, the unemployment rate climbed to 10.2 percent, the first time it has hit double digits since 1983. That, along with the loss of an additional 190,000 jobs in October, shows the economy is still struggling to emerge from recession. 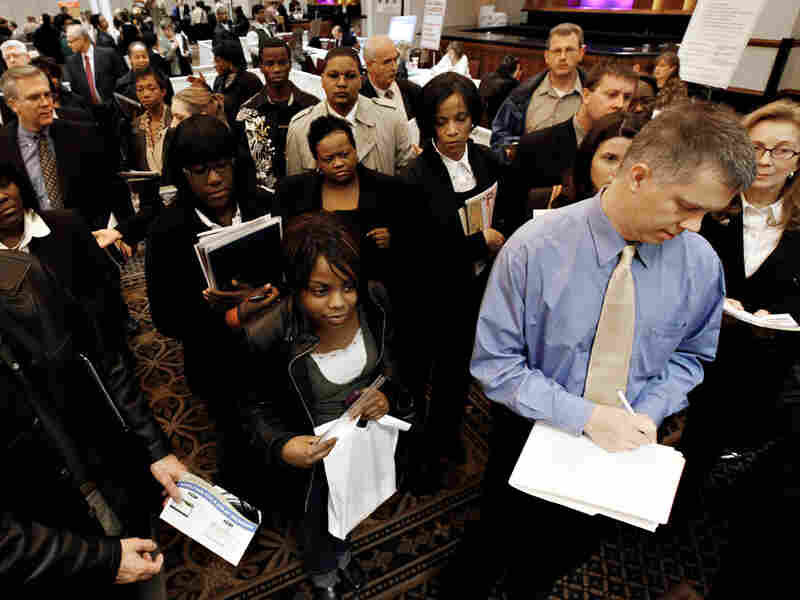 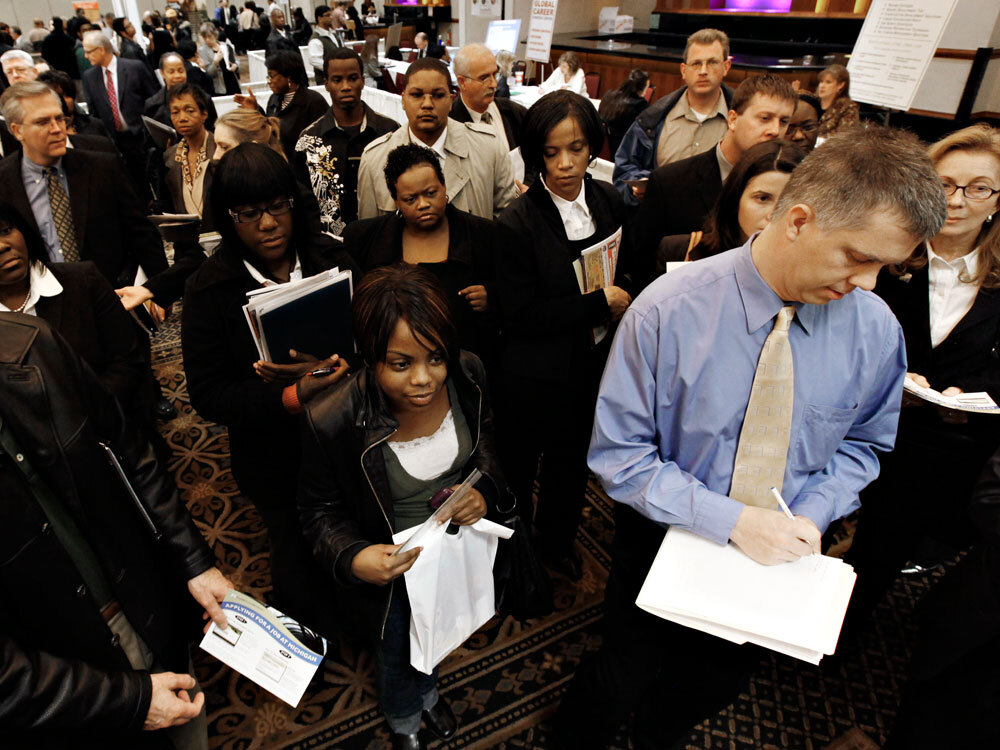 Job-seekers attend a job fair in Livonia, Mich., on Wednesday.

Little over a week after the government said the economy has begun to grow, the unemployment rate climbed to 10.2 percent, the first time it hit double digits since 1983. That, along with the loss of an additional 190,000 jobs in October, shows the economy is still struggling to emerge from recession.

President Obama said the 10.2 percent unemployment figure is "a sobering number that underscores the economic challenges that lie ahead."

His immediate goal when he assumed office was to stop the economy's "free fall," he said, adding that the economy's growth last quarter showed success on this front.

"But history tells us that job growth always lags behind economic growth, which is why we have to continue to pursue measures that will create new jobs," Obama said.

Private economists had forecast that the unemployment rate would rise to 9.9 percent and that jobs would drop by about 175,000 in October. The economy grew at a 3.5 percent rate in the third quarter, after contracting for four straight quarters, but the labor market continues to be a sign of weakness.

"Most of the economic data does continue to indicate that we're emerging from the recession, and for most of this year the pace of job loss has been narrowing," said Alan Levenson, the chief economist for T. Rowe Price. "That has not been the case over the last two months, but I anticipate that over the next two months we'll continue to see smaller rates of decline in employment, and that job growth will resume early next year."

It's the 22nd straight month that the U.S. economy has shed jobs, the longest stretch on records dating back 70 years.

Unemployment Even Worse Than It Seems

Counting those who have settled for part-time jobs or who have stopped looking for work, the unemployment rate would be 17.5 percent, the highest on records dating from 1994.

Levenson said jobs in construction are being weighed down by "the continued right-sizing of residential construction and accelerating weakness in nonresidential" building. He said it's not surprising to see continuing job losses in the retail sector because too many stores were built in response to overzealous consumer spending fueled by borrowing.

A Tale Of Two Surveys

The other is a survey of businesses, which is used to measure the number of jobs cut or added to payrolls. Typically, the payroll survey, which showed a net of 190,000 jobs lost in October, is seen as the key indicator for forecasting the economy's health.

But because the U.S. is emerging from a recession, the household survey may be a better reflection of economic conditions. If that's the case, it suggests that the economy is quite weak because the unemployment rate of 10.2 percent is at its highest point since April 1983, when the U.S. was also in a very deep recession.

Friday's report is the first since the government said last week that the economy grew at a 3.5 percent annual rate in the July-September quarter, the strongest signal yet that the economy is rebounding. But that isn't fast enough to spur rapid hiring, raising the specter of a jobless recovery.

"There is a massive disconnect between the improvement in GDP and what's going on in the labor market," said Robert Stein, senior economist for First Trust. One of the reasons for this is an increase in workplace productivity spurred by technology and business efficiencies. Stein said some companies may be concerned about making additional hires in light of pending health care legislation. Firms may be worried that labor costs will rise due to an increase in insurance rates.

Greenhaus said the economy soared by nearly 8 percent in 1983 after a steep recession, lowering the jobless rate by 2.5 percentage points that year. But the economy is unlikely to improve that fast this time, as consumers remain cautious and tight credit hinders businesses. In fact, many analysts expect economic growth to moderate early next year, as the impact of various government stimulus programs fades.

Many economists also worry that persistently high unemployment could undermine the recovery by restraining consumer spending, which accounts for 70 percent of the economy.

One sign of how hard it still is to find a job: The number of Americans who have been out of work for six months or longer rose to 5.6 million, a record. They account for 35.6 percent of the unemployed population, matching a record set last month.

"We're in a really deep jobs hole," said Chad Stone, chief economist at the Center on Budget and Policy Priorities. "The recovery legislation was really important in getting us to the point where a recovery seems to be starting, but we'll need the additional support for the recovery that will come from renewing the unemployment insurance benefits for next year."

Stone is also concerned about the impact of state budget cuts. States have to balance their budgets, but when they experience falling revenue, they have to trim programs or raise taxes. Stone said that's the opposite of what they should be doing in a weak economy.

Stone said the pace of job losses has been under 200,000 for the past three months — a favorable sign compared with earlier this year, when that number was over 600,000.

Despite this dramatic decline, he said, the U.S. continues to shed jobs. Since the start of the recession, 7.3 million jobs have been lost. But because of population growth, Stone said, the economy would need to add another 2 million jobs — for a total of nearly 10 million — to return to pre-recession levels.

Congress sought to address the impact of long-term unemployment this week by approving legislation extending jobless benefits for the fourth time since the recession began. The bill adds 14 to 20 extra weeks of aid and is intended to prevent almost 2 million recipients from running out of unemployment insurance during the upcoming holiday season.

In the summer of 2008, unemployed people had access to 26 weeks of emergency benefits. The bill signed Friday increases it to 99 weeks. Even though Obama signed the legislation Friday, the whole package of unemployment insurance benefits from the Recovery Act will have to be renewed in order for these benefits to extend to people who become unemployed in 2010.

With additional reporting from NPR staff and wires