Accessibility links
Movie Review - 'The Messenger' - After the Battle, Brothers In Arms A soldier returns home from Iraq, his mind is on his own griefs. Assigned to notify families about war casualties, he finds wise counsel in the person of his more experienced partner. Critic Bob Mondello says that for a film that comes bearing sad reminders about the costs of war, The Messenger is peopled by characters who seem gratifyingly alive. (Recommended) 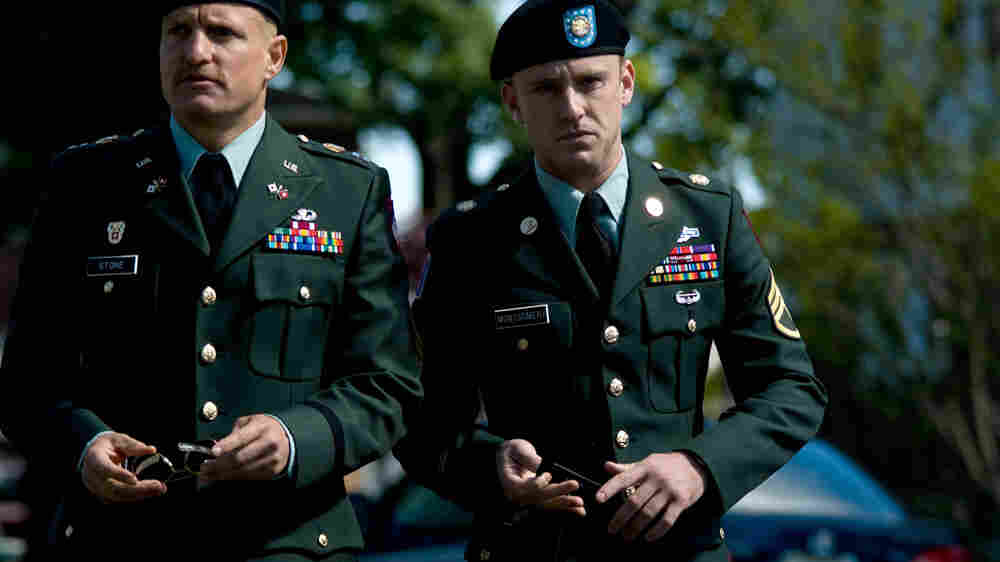 This year's movies about the military have ranged from battlefield blowouts (The Hurt Locker) to combat-zone comedies (Men Who Stare At Goats), but few have gotten at the wrenching home-front emotions explored in Oren Moverman's quietly explosive drama, The Messenger.

The film centers on Staff Sgt. Will Montgomery (Ben Foster), a decorated war hero returned home after surviving a roadside attack in Iraq. His homecoming has been less than smooth — the girl he left behind got engaged while he was away, he's carrying memories and guilt stemming from that roadside bomb incident — all of which has him wrapped tight. Stress, post-traumatic and otherwise, is keeping him awake at night.

Then, with just a few months left in his enlistment, his commander tells him he must render a singularly valuable new service to his country: He's being assigned to a Casualty Notification Team, tasked with telling family members that their loved ones have died in action.

He's teamed with a more experienced officer, Capt. Tony Stone (Woody Harrelson), a career soldier and recovering alcoholic. Stone has a quick wit — he seems pretty relaxed generally — but he's firm on the rules for notifications: Avoid physical contact, don't talk to anyone other than next of kin, no friends, neighbors, mistresses. And for everyone's sake, park down the block, not in front of the home.

"They hear a car park, go to the window, see two soldiers getting out," he tells Will. "It's just a minute of torture."

With six notifications in the film, the reactions of family members run the gamut you'll expect — fury, shock, denial, anguish — sometimes expressed, sometimes fiercely held in. You've seen these moments before in movies, but the folks who bear the bad tidings have always been on the other side of the door. Here, they're the focus, and that changes things.

First-time director Oren Moverman leads you into Stone and Montgomery's mindset by stages. He looks at their down time, shows you how they protect themselves from the pain they're delivering, how they keep everything, even each other, at arm's length — and how that can't last.

Foster and Harrelson are pretty riveting as the notifiers, especially when they're breaking the rules they've set for themselves — getting involved, say, with a widow after notifying her. Messengers with the worst possible message, they nonetheless manage to be human and alive, humorous and lively. In a film that itself bears such sad tidings about the costs of war, that is an affirming, even an inspiring, gift. (Recommended)