Accessibility links
Sapphire's Story: How 'Push' Became 'Precious' The gritty realism of the film Precious is even more intense in the novel Push, upon which the film is based. Author Sapphire discusses the inspiration for her work — and her initial reluctance to allow her work to become a film. 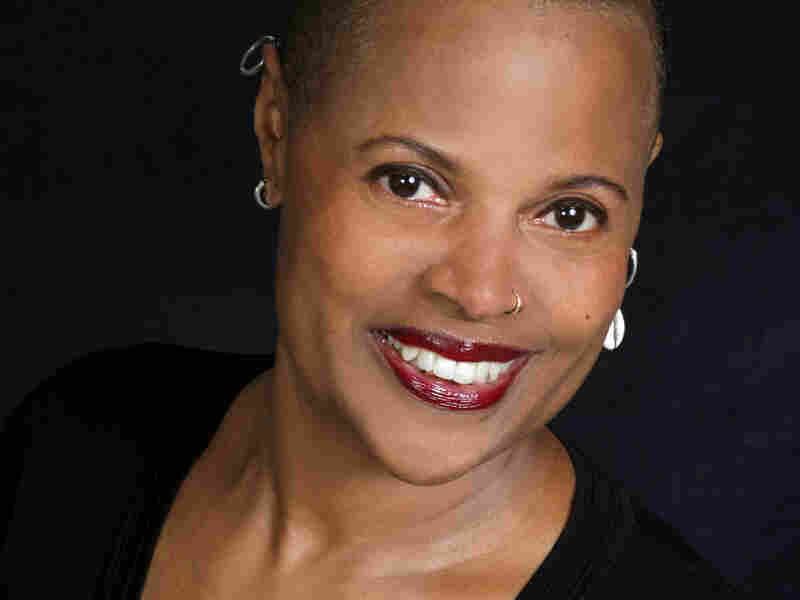 Sapphire wrote the novel Push (renamed Precious) in a fractured ghetto patois that grew out of the author's experiences as a remedial reading teacher. Courtesy of Lionsgate hide caption 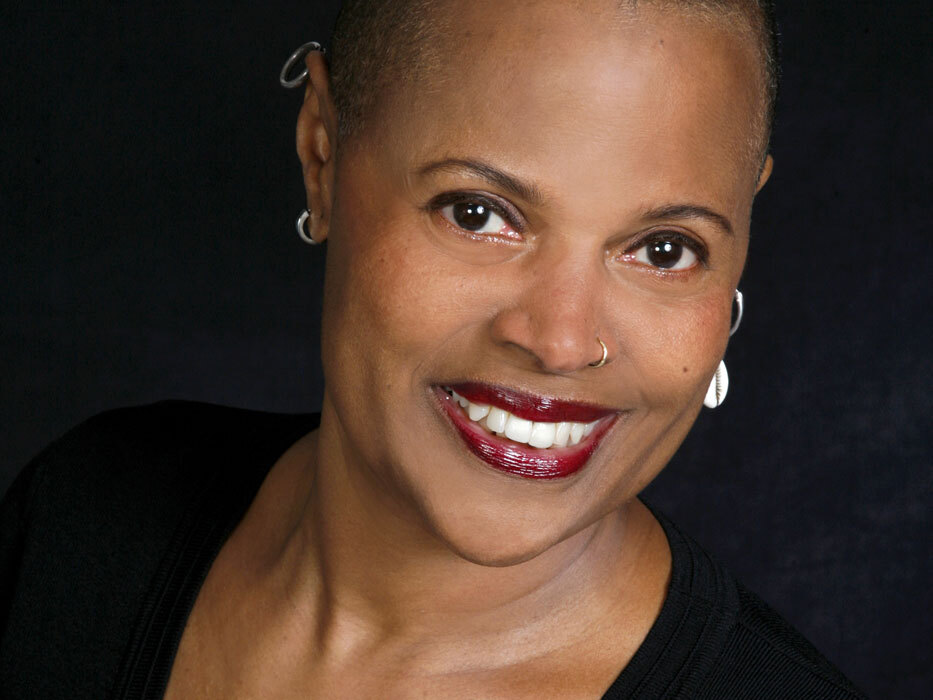 Sapphire wrote the novel Push (renamed Precious) in a fractured ghetto patois that grew out of the author's experiences as a remedial reading teacher.

Even though the film Precious packs quite a wallop, the gritty realism of the novel upon which the movie is based is even more intense. Originally called Push (but recently renamed Precious to coincide with the film), the book, by the writer known simply as Sapphire, tells the story of a dark-skinned, heavy-set, illiterate African-American girl who has survived multiple pregnancies by her father.

Sapphire tells Michele Norris that she began the book in 1993, just as she was about to leave her job as a remedial reading teacher in Harlem to attend Brooklyn College's MFA program: "I had the intense feeling that if I didn't write this book no one else would."

The author says that she encountered girls like Precious while teaching — overweight girls who didn't fit into the confines of our society's beauty paradigm, girls who were essentially "locked out" of the broader culture.

Almost as soon as the book was published, Sapphire received proposals to turn it into a film. But she turned them all down — including an offer from director Lee Daniels. But then she saw Daniels' films Monster's Ball and Shadow Boxer and reconsidered:

"I just knew this was the person who could do this, although none of his films dealt with the issues in the book," she says. "But because he had gone over the edge with his own work ... I thought, 'This is someone who will not back up from the material and will present something true and vital to the public.'"

Though she initially worried that allowing her work to be adapted to film would reinforce negative stereotypes about the black community, Sapphire says that times have changed in the 13 years since her book was written.

"In 2009, we have a tremendous range of black families in the media, form the Cosbys to the Obamas, so now, I think, we are safe enough and secure enough to show this diseased situation with the hope that we can see it as something that needs to be healed, as opposed to something that we need to hide from the public's view," she says.

And, Sapphire says, she hopes that her film will inspire people to have more understanding and compassion for girls like Precious. Recently she was approached by a white woman in Utah who told her that after seeing the film that she would never look at an overweight black woman again with the same judgment:

"After seeing this film, she had to deal with an obese black woman as a feeling, intelligent person as a person who dreams, as a person who wants the things that she wants. So we brought up a stereotype, and we cracked it open, and a human being comes forth." 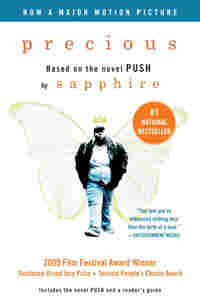 I was left back when I was twelve because I had a baby for my fahver. That was in 1983. I was out of school for a year. This gonna be my second baby. My daughter got Down Sinder. She's retarded. I had got left back in the second grade too, when I was seven, 'cause I couldn't read (and I still peed on myself). I should be in the eleventh grade, getting ready to go into the twelf' grade so I can gone 'n graduate. But I'm not. I'm in the ninfe grade.

I got suspended from school 'cause I'm pregnant which I don't think is fair. I ain' did nothin'!

My name is Claireece Precious Jones. I don't know why I'm telling you that. Guess 'cause I don't know how far I'm gonna go with this story, or whether it's even a story or why I'm talkin'; whether I'm gonna start from the beginning or right from here or two weeks from now. Two weeks from now? Sure you can do anything when you talking or writing, it's not like living when you can only do what you doing. Some people tell a story 'n it don't make no sense or be true. But I'm gonna try to make sense and tell the truth, else what's the fucking use? Ain' enough lies and shit out there already?

So, OK, it's Thursday, September twenty-four 1987 and I'm walking down the hall. I look good, smell good-fresh, clean. It's hot but I do not take off my leather jacket even though it's hot, it might get stolen or lost. Indian summer, Mr Wicher say. I don't know why he call it that. What he mean is, it's hot, 90 degrees, like summer days. And there is no, none, I mean none, air conditioning in this mutherfucking building. The building I'm talking about is, of course, I.S. 146 on 134th Street between Lenox Avenue and Adam Clayton Powell Jr Blvd. I am walking down the hall from homeroom to first period maff. Why they put some shit like maff first period I do not know. Maybe to gone 'n git it over with. I actually don't mind maff as much as I had thought I would. I jus' fall in Mr Wicher's class sit down. We don't have assigned seats in Mr Wicher's class, we can sit anywhere we want. I sit in the same seat everyday, in the back, last row, next to the door. Even though I know that back door be locked. I don't say nuffin' to him. He don't say nuffin' to me, now. First day he say, "Class turn the book pages to page 122 please." I don't move. He say, "Miss Jones, I said turn the book pages to page 122." I say, "Mutherfucker I ain't deaf!" The whole class laugh. He turn red. He slam his han' down on the book and say, "Try to have some discipline." He a skinny little white man about five feets four inches. A peckerwood as my mother would say. I look at him 'n say, "I can slam too. You wanna slam?" 'N I pick up my book 'n slam it down on the desk hard. The class laugh some more. He say, "Miss Jones I would appreciate it if you would leave the room right NOW." I say, "I ain' going nowhere mutherfucker till the bell ring. I came here to learn maff and you gon' teach me." He look like a bitch just got a train pult on her. He don't know what to do. He try to recoup, be cool, say, "Well, if you want to learn, calm down--" "I'm calm," I tell him. He say, "If you want to learn, shut up and open your book." His face is red, he is shaking. I back off. I have won. I guess.

I didn't want to hurt him or embarrass him like that you know. But I couldn't let him, anybody, know, page 122 look like page 152, 22, 3, 6, 5--all the pages look alike to me. 'N I really do want to learn. Everyday I tell myself something gonna happen, some shit like on TV. I'm gonna break through or somebody gonna break through to me--I'm gonna learn, catch up, be normal, change my seat to the front of the class. But again, it has not been that day.

Excerpted from Precious (Push Movie Tie-in Edition) by Sapphire Copyright 1997 by Sapphire. Excerpted by permission of Vintage, a division of Random House, Inc. All rights reserved. No part of this excerpt may be reproduced or reprinted without permission in writing from the publisher. 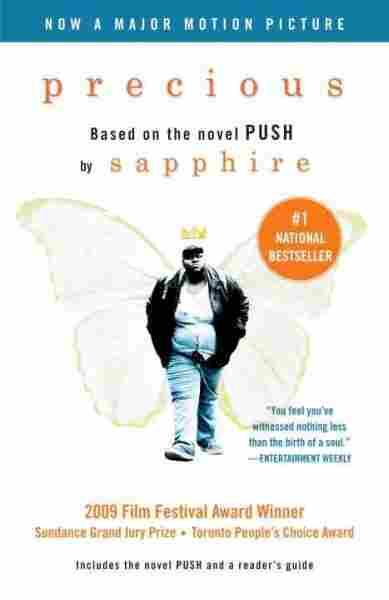