Accessibility links
So It's Come To This: A Weezer Snuggie The pop band Weezer is known for its quirky nods to pop culture, most notably in music videos that reference the Muppets and the Internet's most popular memes. Now, the rock band has embraced the Snuggie — the blanket you can wear.

Weezer is known for its quirky nods to pop culture. The band has recorded music videos featuring the Muppets and every Internet meme this decade. And now, the band has taken on the Snuggie. 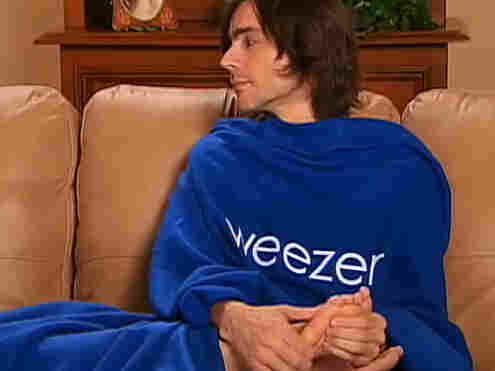 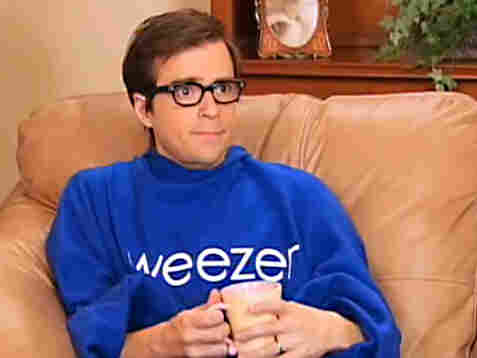 Rivers Cuomo cozies up to a hot cup of chamomile tea in his blue Weezer Snuggie. Courtesy of the artist hide caption

If you didn't already know, the Snuggie is essentially a blanket you can wear. It's been the subject of many parodies that have elevated the Snuggie to the status of ironic pop-culture icon.

To promote the band's new album, Raditude, Weezer embraced the phenomenon by offering its own Snuggie, as well as an infomercial in which all four band members proudly wear the bright blue garments.

"Well, like Weezer, Snuggies are just this weird, cool product that everyone seems to like," says singer Rivers Cuomo. "They're really popular, and you can't really figure out why. So we figured it's a good match."

The band even played The Late Show With David Letterman while dressed in Snuggies.

"It's actually great to play in a Snuggie," Cuomo says. "Your arms are free, so you can play guitar and drums, or you can do big rock poses — unlike a blanket that would be falling all over the place."

There's an older Weezer song that seems to challenge the very fabric of it all, called "Undone": "If you want to destroy my sweater / Hold this thread as I walk away."

In an interview with Cuomo, NPR's Guy Raz wonders whether a Snuggie could be destroyed the same way.