Accessibility links
The Night The Wall Fell: Freedom, Fatherhood Collide Twenty years ago, the Berlin Wall that divided the city and served as the symbol of a Europe divided between communist East and democratic West fell. For one young German, that momentous day held both political and personal significance.

Germans are celebrating 20 years since the fall of the Berlin Wall that divided the city and served as the symbol of a Europe divided between communist East and democratic West.

The spark that led to the wall's fall happened largely by accident. Weeks of mass protests had put enormous pressure on the East German communists to ease travel restrictions, a key demand by demonstrators.

At a press conference on Nov. 9, 1989, an official of the German Democratic Republic, or East Germany, announced — prematurely and mistakenly — that visa restrictions would be eased effective immediately. 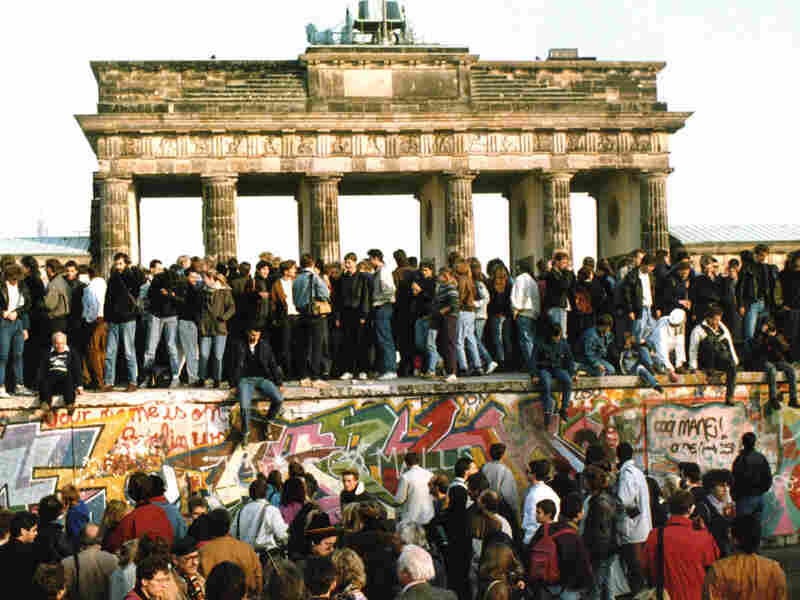 People walk on the Berlin Wall in front of the Brandenburg Gate on Nov. 10, 1989, a day after the wall came down. AP hide caption 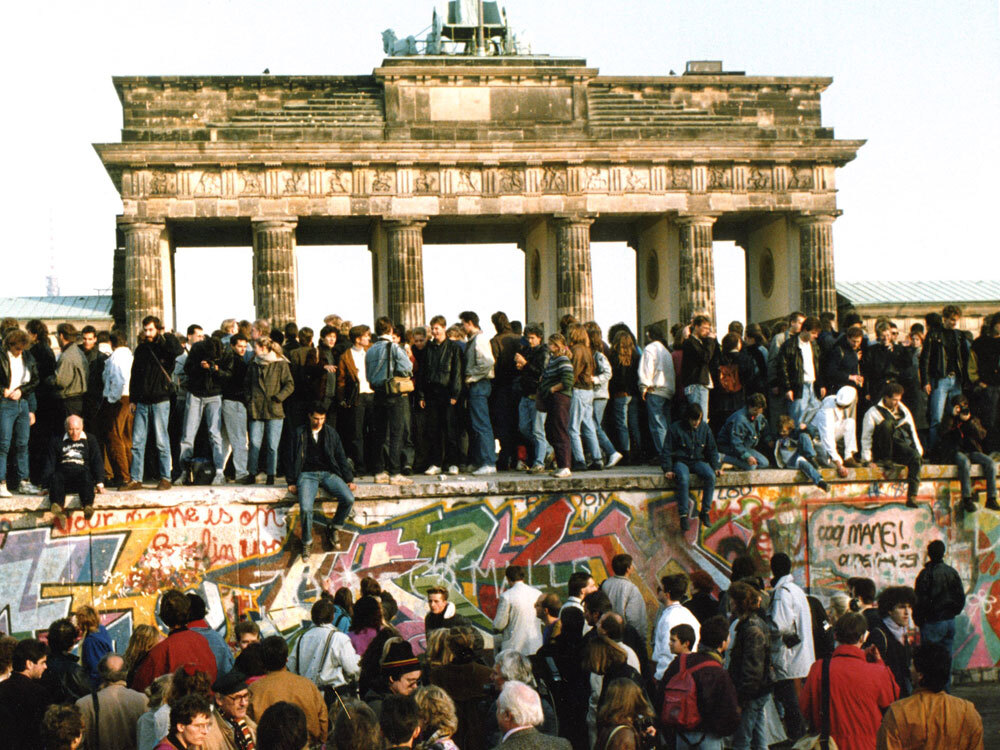 People walk on the Berlin Wall in front of the Brandenburg Gate on Nov. 10, 1989, a day after the wall came down.

Day Of Political And Personal Significance

Freedom and fatherhood is how Oliver Karsitz remembers it. He was 19 and sitting in his apartment in West Berlin when he heard that people in the East — where his father lived — were starting to flood across Bornholmer Strasse bridge, a former main checkpoint of the Berlin Wall.

"I was sitting in front of the TV watching this East German press conference, and when my girlfriend came home, I said, 'Get this, the wall has fallen!' She couldn't believe it," he recalls.

But his girlfriend had just come from the doctor and had news of her own: She was pregnant.

"Suddenly I was so overwhelmed, I could hardly process the news about the wall because my personal news was bigger and more significant to me in that very moment," says Karsitz. "We were both — oh, how do I put it — we were completely bewildered by it all."

On a recent night, Karsitz revisited the Bornholmer Strasse bridge. Except for a small plaque, there is almost nothing in this dreary corner of what was East Berlin to indicate the bridge's historic significance.

The weather that night 20 years ago was the same: cold and a bit rainy. Karsitz remembers that the area was packed with people and cars, and that he felt mixed emotions — somewhere between fear and happiness.

"I wasn't really aware of it being an historic moment," he says. "We were all just dumbfounded the wall was falling."

"It was pure emotion," he says, "completely surreal."

I wasn't really aware of it being an historic moment. We were all just dumbfounded the wall was falling. ... It was pure emotion, completely surreal.

Oliver Karsitz, who was 19 when the Berlin Wall fell 20 years ago

Karsitz says he saw things that night and in the following days that embarrassed him.

"I saw my fellow countrymen lining up diligently to get the money the West was offering as a welcome greeting. After standing in lines all their lives in the East, the first thing they did in the West was join another line, instead of enjoying the moment. I found that mortifying," he says.

Karsitz and his pregnant girlfriend quickly set off for East Berlin to tell his father all the news. Karsitz hadn't seen his father since he had fled to the West two years earlier. That night, he and his girlfriend were among the few heading East, pushing against the throng heading the other direction.

"It was actually very difficult for us to work our way through the streams of people who were naturally going to the West. People with champagne bottles in their hands kept shouting to us, 'The West is that way!' " Karsitz says, adding that he replied, "I know where I'm headed, thanks, I'm going to see my father."

But he wasn't sure his father would be home. After all, the wall was down, and it was becoming clear that the communist German Democratic Republic would never be the same.

"We all thought every single East Berliner would be at the border that evening. But my father's nature was fairly laid back, and lo and behold, he was at home, waiting for us," Karsitz says.

He says his father is a reserved person who doesn't show his emotions easily. But the fall of the Berlin Wall touched even him.

"He was of course overjoyed to see me again, but also to meet my girlfriend for the first time. So much news in one go. We were all so speechless about the wall, we hugged, and then we told him he was going to be a grandfather. He was completely floored," Karsitz says.

Father and son drank champagne into the early morning hours, after which Karsitz and his girlfriend headed back across the open checkpoint to their apartment in the West.

Karsitz, who works as a cameraman for German TV, is unsentimental about that night. "I always try to look to the future and live for today," he says.

His daughter, who is about to turn 20, is training to be a Web designer. His relationship with her mother didn't last. Karsitz's father still lives in what was East Germany.

Checkpoint Charlie shown in June 1968 (left) and October 2009 (right). During the Cold War, Checkpoint Charlie was the main border crossing between East and West Berlin; today, the historic site is a popular shopping district and tourist attraction.

Karsitz says that his generation lived with the East-West tensions every day, but they are "meaningless" today to his daughter and her friends.

"My daughter has no inkling of what it was really like then. Our generation is still working through it all, to some extent. East and West come together everywhere in this city now. At your job, for example, you work with people from both sides of the wall, and you notice the divisions a little bit, the different outlooks. But for her it plays no role whatsoever," he says.

Karsitz says that in the 1990s, when young people rushed into East Berlin for the cheap rent, the art and the party scene, he kept his distance. East Berlin was suddenly the place to be. Everything seemed possible, he says. There was space to live out your ideals, be creative, and life wasn't as orderly. And of course, he adds, there were loads of fabulous parties. But it took Karsitz a decade before he could move back to East Berlin.

"East Berlin still held too many oppressive memories, and I could still sense the shadows of the old regime. I still experienced the numb feeling of sadness, and I couldn't shake it off. Without wanting to sound too melodramatic about it, it took me some time to shake off the dust of the past, until I was able to say, OK, I'm going back," he says.

Now at key plazas in Berlin where the wall once stood, faux border guards in period military uniforms hawk toy passports for tourists, complete with a fake East German border stamp — nostalgia at 2 euros a pop.

Selling kitschy souvenirs of a dictatorship and a once-deadly border is seen as a moral outrage to many who lived with the wall, including Karsitz. But, he concedes, it's also a sign of normalcy.