Accessibility links
In The End, Fall Of Berlin Wall Was Gorbachev's Call Nov. 9, 1989, is remembered by many as a moment of joy and a triumph of U.S. diplomacy. But a review of historical documents paints a more complex picture, with Washington worried that events were moving too slowly — and Moscow embracing the change.

In The End, Fall Of Berlin Wall Was Gorbachev's Call

In The End, Fall Of Berlin Wall Was Gorbachev's Call 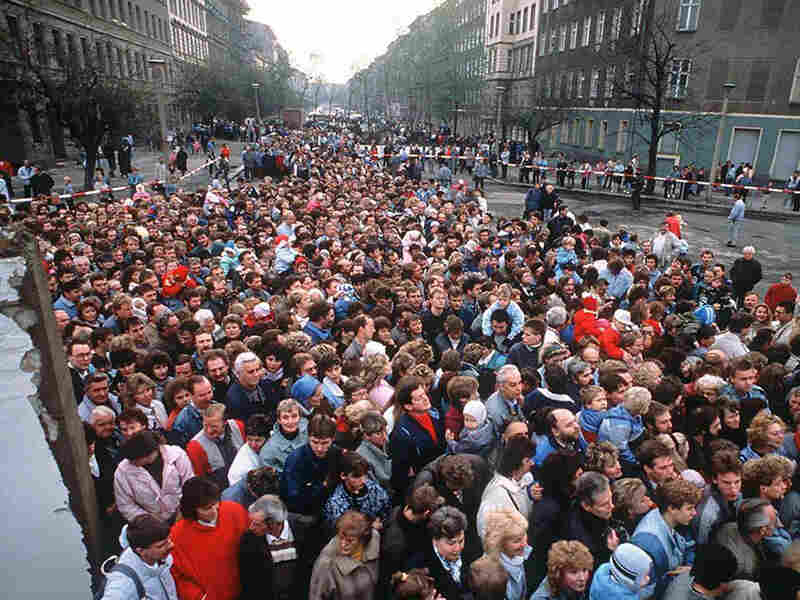 In November 1989, thousands of East Berliners cross through an opening in the wall, traveling freely to the West for the first time since 1961. Sipa via AP hide caption 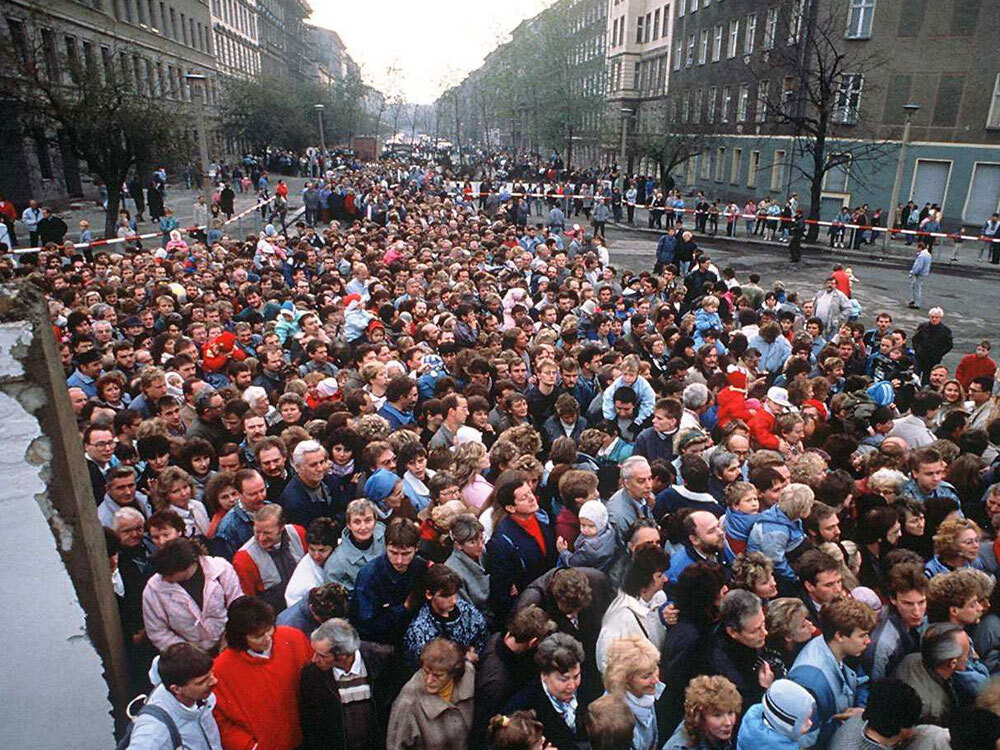 In November 1989, thousands of East Berliners cross through an opening in the wall, traveling freely to the West for the first time since 1961.

Twenty years ago, the world was transfixed by images of spirited Germans clambering on top of the forbidding Berlin Wall and beginning to dismantle its legacy with each swing of their pickaxes and hammers.

The events of Nov. 9, 1989 — the day the wall fell — became the primary symbol of renewal and rebirth for all of Eastern Europe.

But historians who are reviewing formerly classified documents and materials from the period say the events of Nov. 9 looked very different at the time.

"Looking back, we feel the happiness and the joy," says Thomas Blanton, who runs the National Security Archive at George Washington University. "We're so far away from the real anxiety and fear of the speed of change."

Blanton and his colleagues have been working to assemble a massive collection of internal government documents from the United States, Western Europe and the former Soviet bloc. Their book, 'Masterpieces of History': The Peaceful End of the Cold War in Europe 1989, is scheduled to be published early next year, but some of the key documents are being released early on the group's Web site.

The wall's fall is remembered in the United States as a triumph of U.S. diplomacy and the administration of George H.W. Bush over Soviet leader Mikhail Gorbachev. But Blanton says the documents tell a different story.

"The United States was in many ways peripheral to the events," he says. "There is a profound sense of the missed opportunities of the period when Gorbachev was at the height of his powers."

With many senior U.S. officials still deeply skeptical about whether Gorbachev's political and economic reforms were for real, events were driven more by bold reformers in Eastern Europe and a Soviet regime that made a conscious decision to support the opening up of its longtime satellite states, documents collected by the National Security Archive reveal.

At the time, one of the biggest questions in the West was whether Soviet or East German security forces would use force to put down a series of demonstrations that had been building in East Germany.

This question became particularly urgent as thousands of East Germans converged on border crossings on the night of Nov. 9. They began to gather after the government in East Berlin made an ambiguous announcement that travel restrictions would be loosened immediately.

Read Documents From The Era Of The Wall's Fall 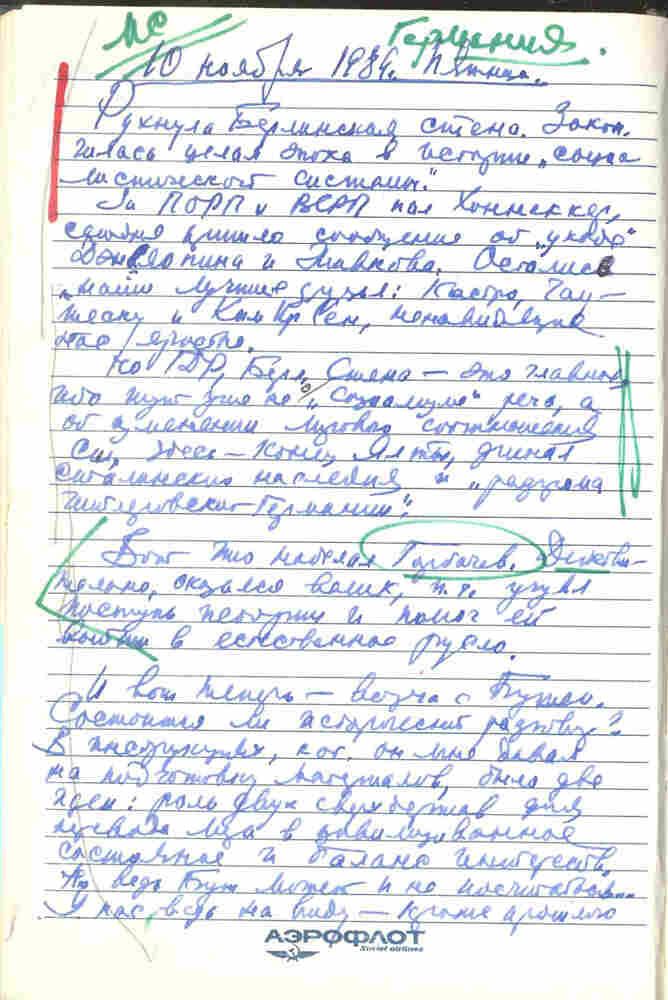 "The Berlin Wall has collapsed. This entire era in the history of the socialist system is over," Gorbachev adviser Anatoly Chernyaev wrote. hide caption 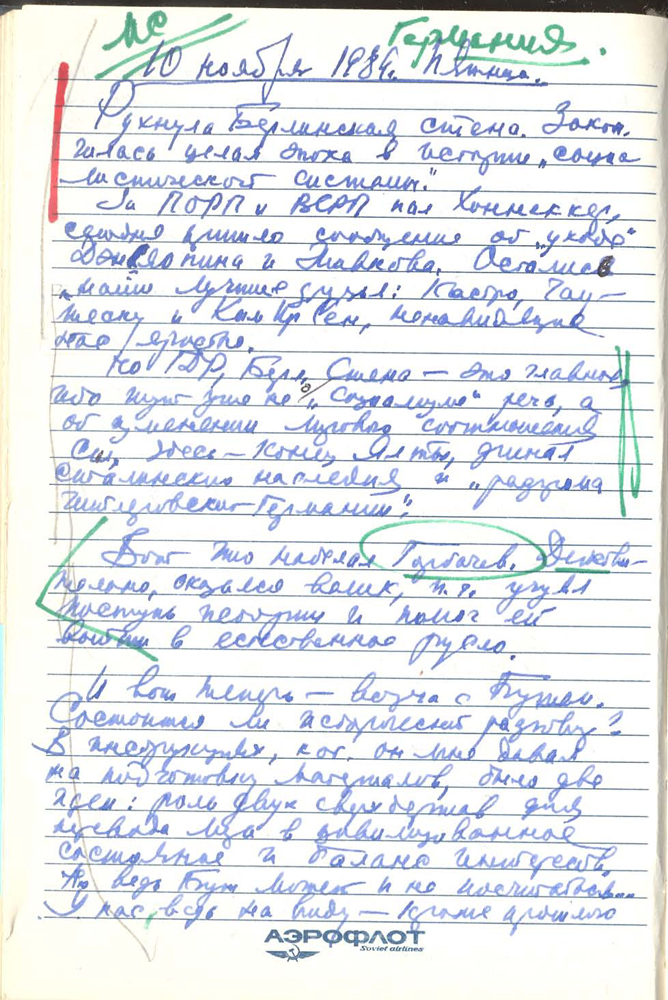 "The Berlin Wall has collapsed. This entire era in the history of the socialist system is over," Gorbachev adviser Anatoly Chernyaev wrote.

But Svetlana Savranskaya, a Soviet historian and analyst at the National Security Archive, says that for Moscow, at least, there never was any consideration of using violent measures. As far back as 1986, Gorbachev, whose formal title was general secretary of the Communist Party, formally told the Soviet Politburo that he would not support using force against demonstrators.

"With all the documents we've seen, there is not a single indication that any senior security, military or political official even raised the issue," Savranskaya says. "If the general secretary already said it was off the table, they would have been concerned about their careers if they raised the issue."

In fact, the Soviet leadership almost welcomed the events in Berlin, which had followed months of refugee crises in Eastern Europe.

"For the Soviets, when the wall came down, it was just another border opening up," says Savranskaya. "They just wanted to keep it peaceful."

Earlier in the day on Nov. 9, the Politburo was meeting, but the topic of East Germany never came up, according to the records. Instead, officials were more focused on events inside the Soviet Union, particularly burgeoning independence movements in the restive Baltic States and Georgia.

When the wall fell that night, Gorbachev wasn't even awakened by his advisers. The next day, the Politburo did not bother to hold an emergency meeting.

"The Berlin Wall has collapsed. This entire era in the history of the socialist system is over," he wrote. "Today we received messages about the retirement of [China's] Deng Xiaopeng and [Bulgaria's] Todor Zhivkov. Only our 'best friends' Castro, [Romania's Nicolae] Ceausescu, and [North Korea's] Kim Il Sung are still around — people who hate our guts."

Savranskaya says that Soviet leaders had decided that closer integration with Europe was the only solution for their deep economic woes. For this to happen, Eastern Europe had to be opened up.

In his diary entry, Chernyaev remarkably goes on to praise Gorbachev for his role in the events in Berlin. "This is the end of Yalta, the Stalinist legacy, and the 'defeat of Hitlerlite Germany,'" he writes. "This is what Gorbachev has done. And he has indeed turned out to be a great leader. He has sensed the pace of history and helped history find a natural channel."

In Washington, Anxiety And A Muted Response

By contrast, the reaction of the Bush administration in Washington was muted. In a press conference, Bush was even asked why he wasn't more elated. "I am not an emotional kind of guy," he responded.

But privately, Bush had been worried for several months that "things were moving too fast," Blanton says.

In a revealing telephone conversation on Nov. 10, German leader Helmut Kohl was gushing about the previous night's events. "It is like witnessing an enormous fair," he told Bush, according to notes taken by Robert Gates, the current defense secretary and then a member of the White House staff. "It has the atmosphere of a festival."

Bush's reaction was noticeably cautious. "I want to see our people continue to avoid especially hot rhetoric that might by mistake cause a problem," he said to Kohl. "I'm proud of the way you're handling an extraordinarily difficult problem."

The United States wasn't the only country worried about how quickly events were moving.

On the morning of Nov. 9, Kohl was in Warsaw to meet with Lech Walesa, the Polish opposition leader.

The German account of the meeting reveals that Walesa, despite his own efforts to oust the Polish Communist Party, saw the developments in East Germany as "deeply dangerous."

Walesa tells Kohl that he is worried that West Germany will be too distracted by events in East Germany and will end up neglecting Polish reform efforts. He goes on to wonder whether the wall will still be standing in one or two weeks.

Later that night, the wall was breached.