Accessibility links
40 Years Of Lessons On 'Sesame Street' As the classic children's television program celebrates its 40th anniversary, the producers of Sesame Street talk about how the show has changed. 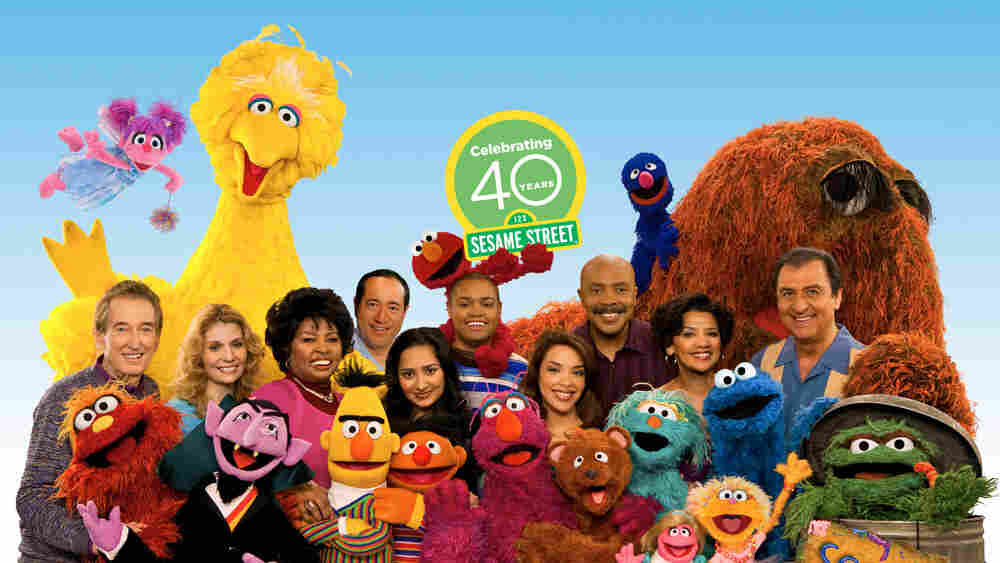 Familiar faces abound on the new season of Sesame Street, but many new characters have taken up residence since the show started 40 years ago. Richard Termine/Sesame Workshop hide caption 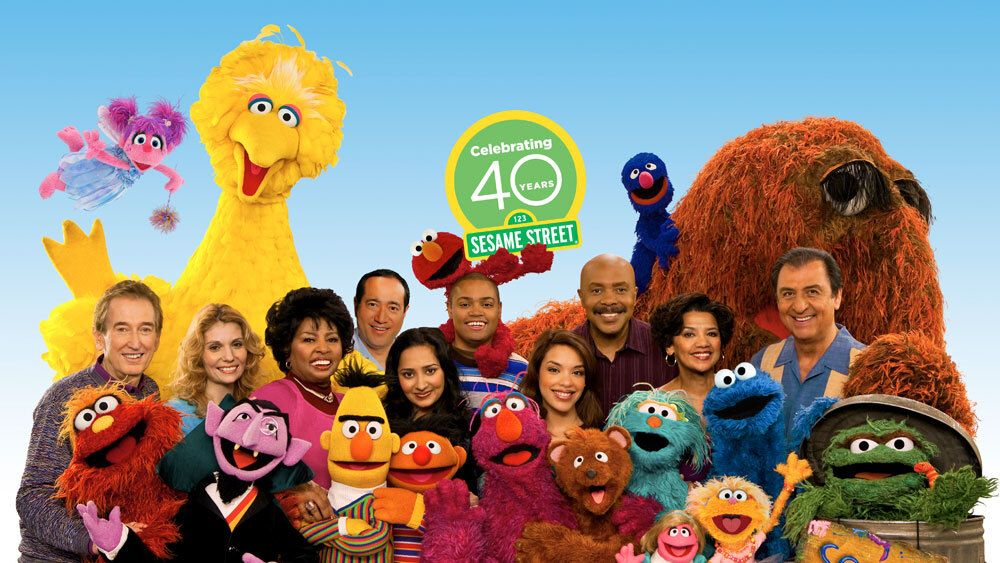 Familiar faces abound on the new season of Sesame Street, but many new characters have taken up residence since the show started 40 years ago. 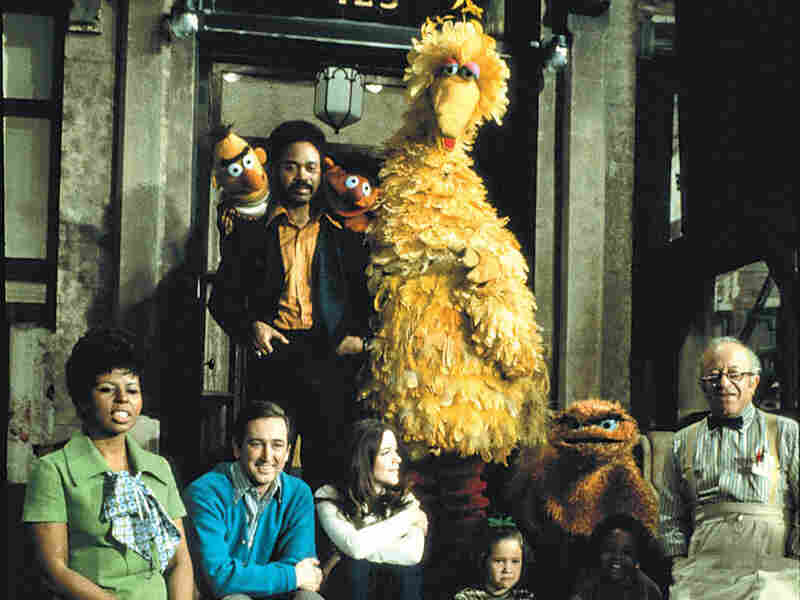 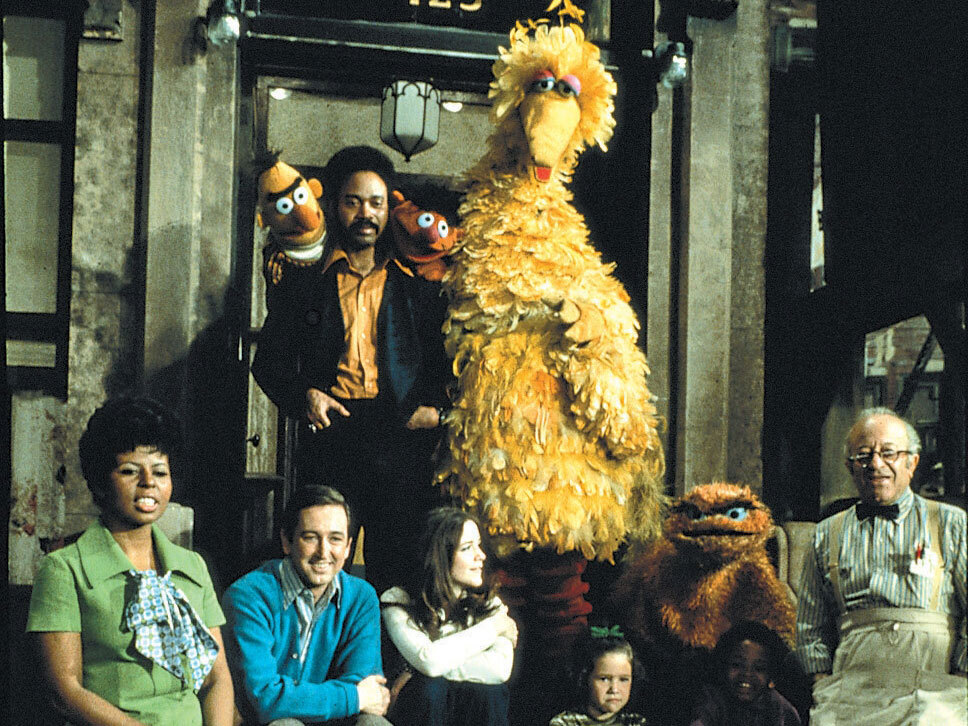 The show's first season included a grittier set and an early — orange — version of Oscar the Grouch.

Michele Obama Plants A Garden With Big Bird and Elmo

Sesame Street was always considered an experiment. When the very first episode aired on Nov. 10, 1969, the show seemed to pose one big unanswered question: Could children learn from television?

Forty years later, that question has been answered. Millions of kids can thank the program for the 1-2-3s and A-B-Cs, but what have the show's actors and producers learned from their grand experiment? Let's count eight lessons of Sesame Street.

When Sesame Street started, researchers had a big concern about the format of the program. They thought that monsters shouldn't talk to humans.

"At the time, educators were concerned that there would be a mix-up between fantasy and reality," says Louise Gikow, a writer who has worked with Jim Henson Productions, the company that provided the show's Muppets. Gikow has just published a book called Sesame Street: A Celebration — 40 Years of Life on the Street. She continues, "They thought that children would have a difficult time adjusting to that."

In fact, when the producers test-marketed the show, the exact opposite turned out to be true. Kids paid more attention when the Muppets talked. 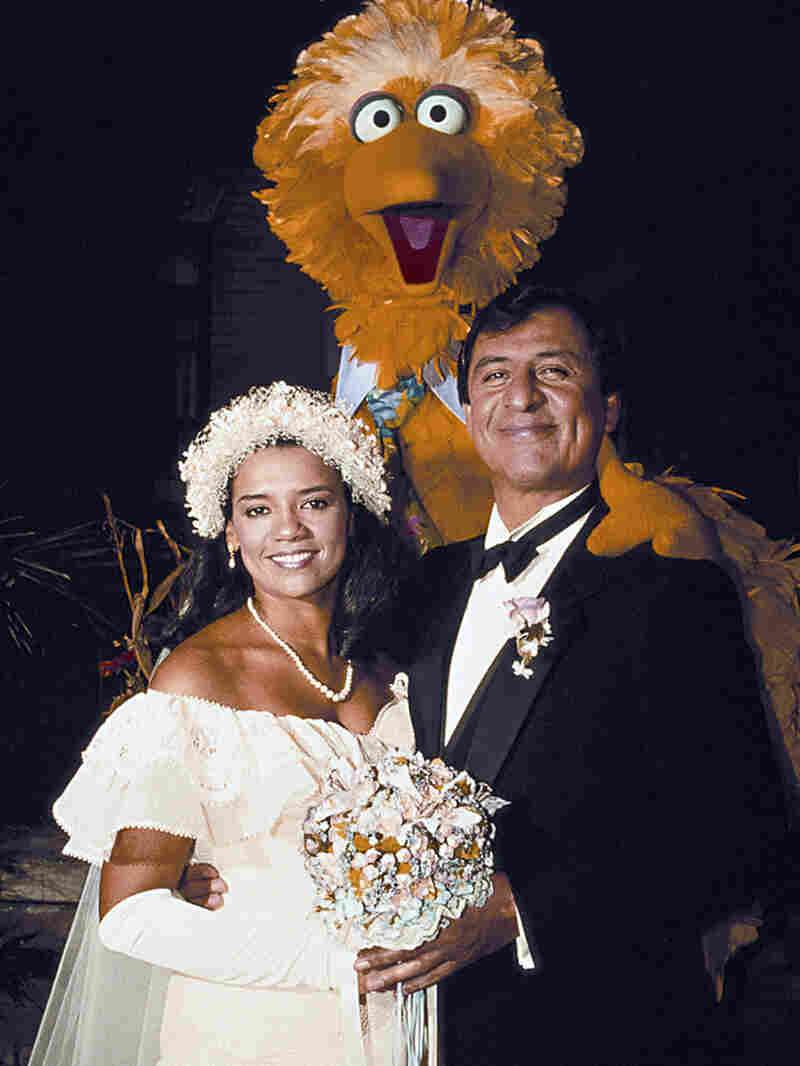 When it began, the focus of Sesame Street was on learning numbers and letters. As the show went on, it tackled a whole range of life issues. Characters Maria and Luis were married on an episode in 1988. Sesame Workshop hide caption 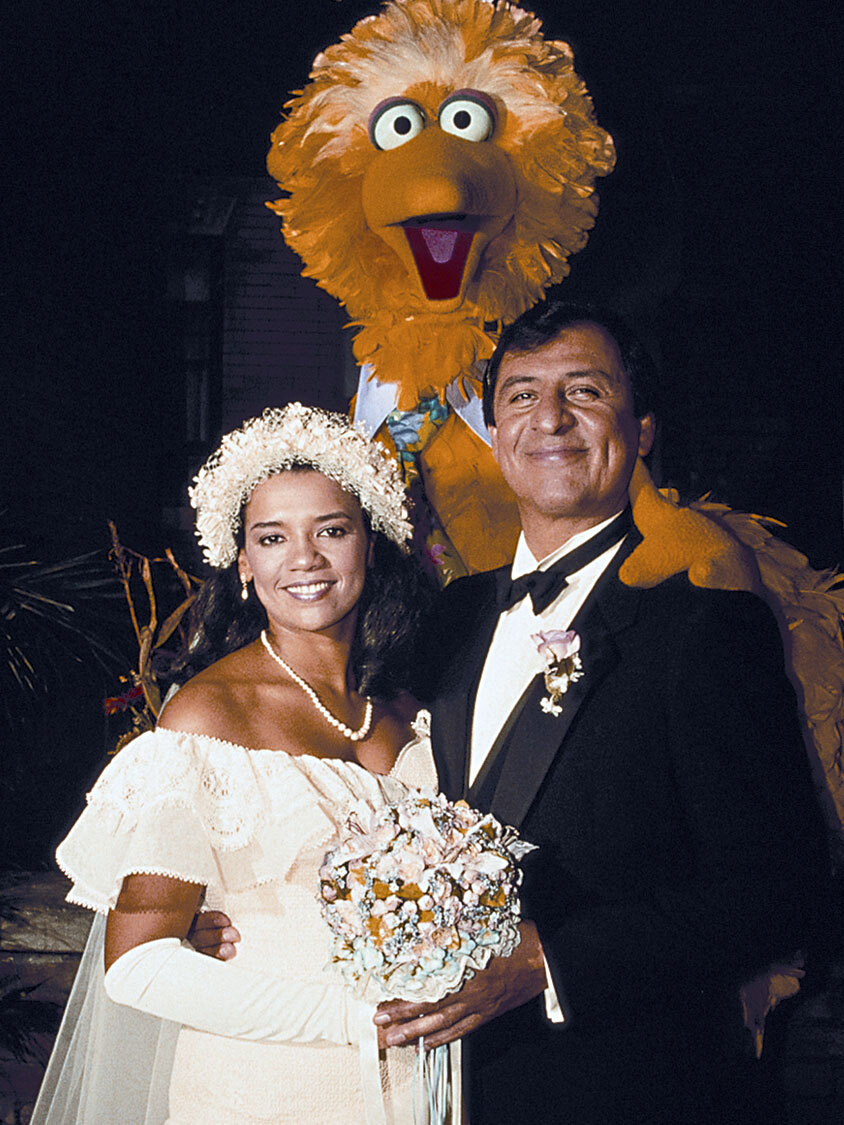 When it began, the focus of Sesame Street was on learning numbers and letters. As the show went on, it tackled a whole range of life issues. Characters Maria and Luis were married on an episode in 1988.

Carroll Spinney, the man who gives voice to Big Bird and Oscar, calls the first episode of Sesame Street "amateur hour." That's because the Muppet characters were so raw. Big Bird was originally payed as a dim-witted adult with a dopey voice. But after a while, Spinney had a revelation: Big Bird wasn't stupid, he was just a child.

In the beginning, Oscar was orange. Cookie Monster originally had teeth. Big Bird had a pin-head. Appearance isn't everything; if the characters feel real, Sesame Street insiders say, kids will follow them through whatever changes they make.

4. C Is For Competition

With only a few exceptions, Sesame Street had the children's education market to themselves for years. But with the success of the program, other characters began moving into the television neighborhood. Over the years, as Barney, Dora, SpongeBob and others tugged away at the Sesame Street audience, producers started to plan some major renovations.

If you only watched Sesame Street in the early years, you'll be surprised by the look and feel of the program today. It's brighter, for one. There's a nice dappling of fake sunshine on the set, the graffiti is gone, and the sound of cars in the distance has disappeared. Carrol Spinney — or maybe the Grouch inside of him — says, "It looked a little more grungy, and frankly I loved it grungy." In the beginning Sesame Street was aimed mainly at urban kids who didn't have the preparation to start school. When everyone started watching, it needed to be brighter.

6. Learn From Your Mistakes

In 1994, Sesame Street started to sprawl. The show built a whole new set for a segment called "Around the Corner." It was supposed to be a glimpse of what happened on the next street over. Then they added a hotel, the "Furry Arms," and a whole list of new characters and a great comedic actor, Ruth Buzzi. But it never caught on. 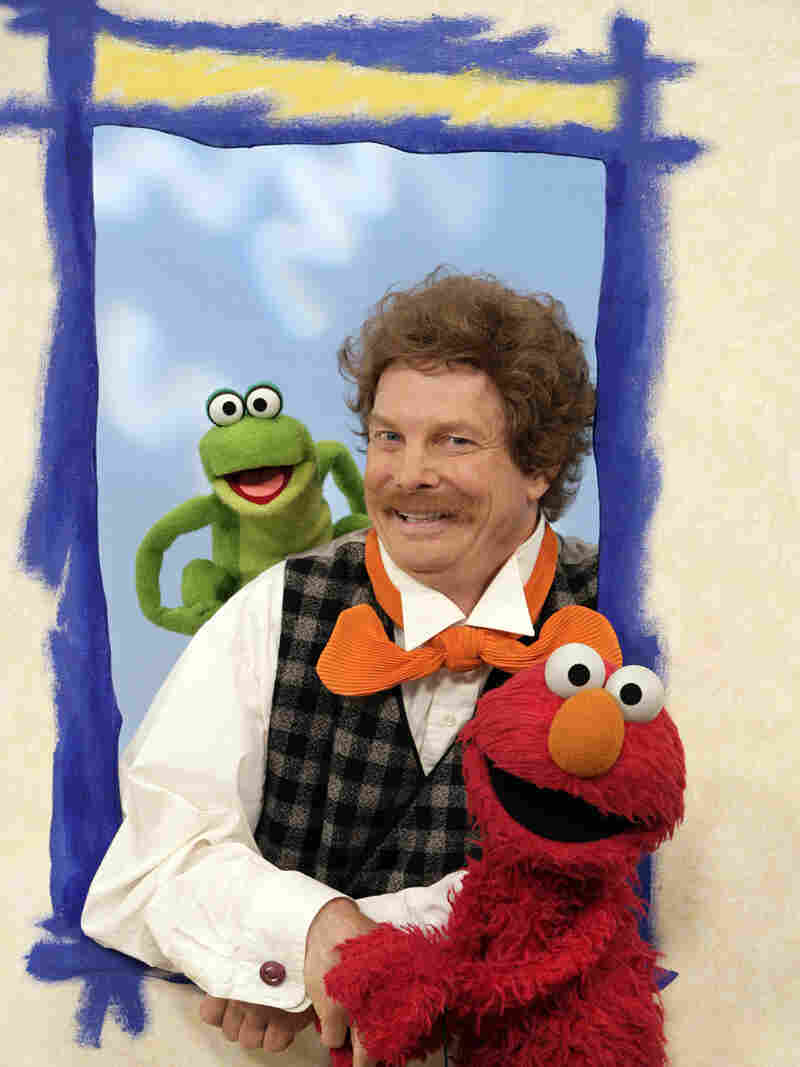 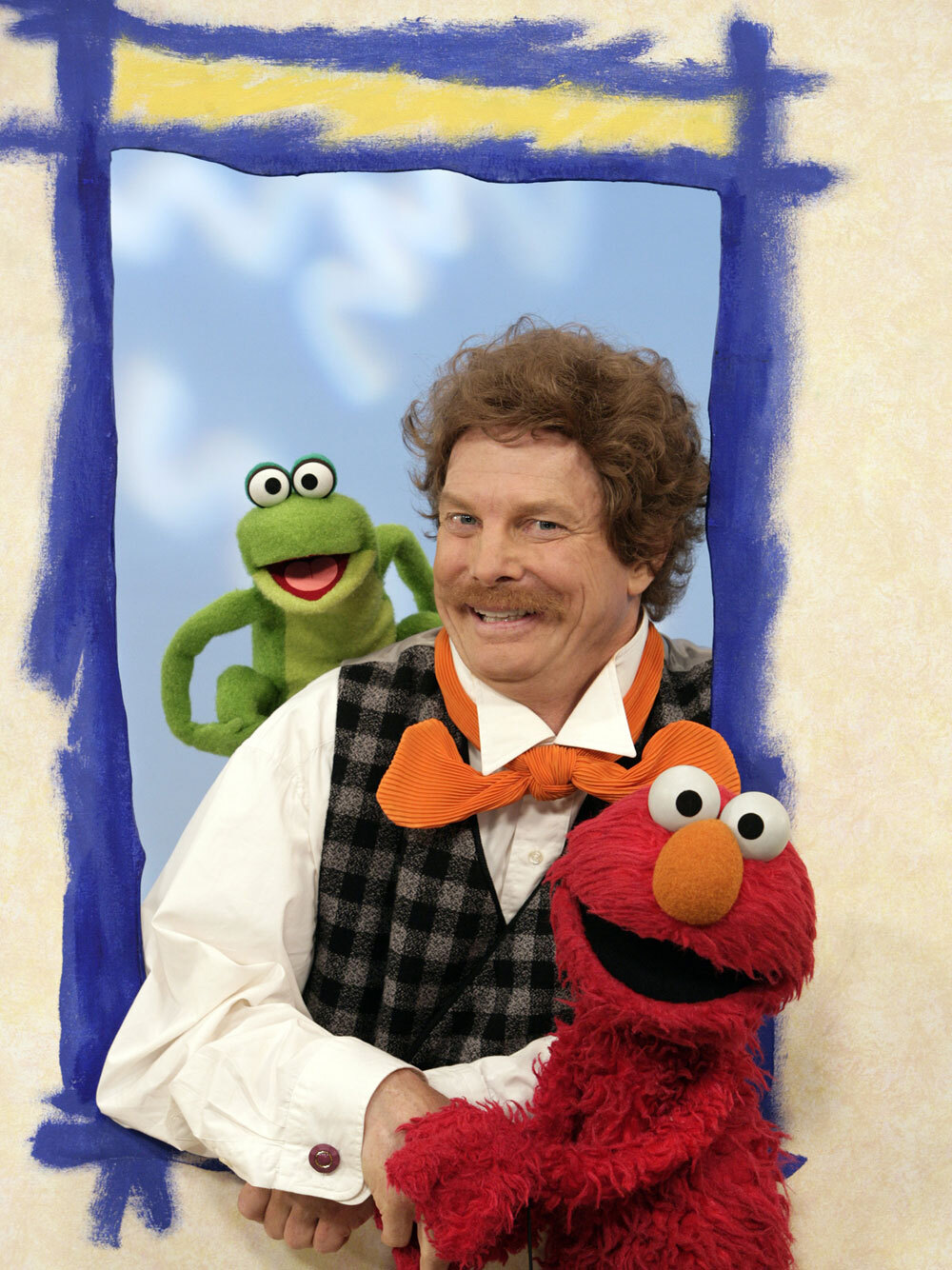 Elmo with actor Bill Irwin as Mr. Noodle on an "Elmo's World" segment from the show's 39th season.

"We ended up with too many characters and too much going on," says author Louise Gikow. "So they pulled back the characters and went back to the street."

The early Sesame Street was based on variety shows like Laugh-In. Segments varied wildly in length and subject, and you could never quite tell what would happen next, or how long it would last. At the time, researchers thought the unpredictability helped to hold kids' attention. But with the advent of the VCR and DVD, it became clear that kids could watch one story for long periods of time.

"We were breaking up the narrative," says Rosemary Truglio, the head of research at the Sesame Workshop, a non-profit organization that used to be known as the Children's Television Workshop. "Instead of having the children experience the narrative as a 15-minute story."

Now, the interruptions are gone. The new season of Sesame Street has a bunch of little shows within the show. One long story might be followed by 10 minutes of Ernie and Bert, after which Elmo gets his 15-minute block. It's calm and predictable for kids, especially the 2-to-4-year-old audience that Sesame Street is now drawing, says Carol-Lynn Parente, the show's executive producer.

Sesame Street's producers have come a long way from worrying about whether their Muppets should talk with their human characters. Now, Ernie and Bert are clay-mation and the fairy Abby Cadabby is computer generated. Executive producer Parente calls the new developments "content as assets." In other words, it's easier to move a computer generated figure into video games and cell-phone video.

The expansion into merchandising might make purists squirm, but those lovable furry puppets aren't going anywhere. And research says that for kids who watch, the characters are so real that they don't care if Elmo is clay or fur, as long as the story is good. 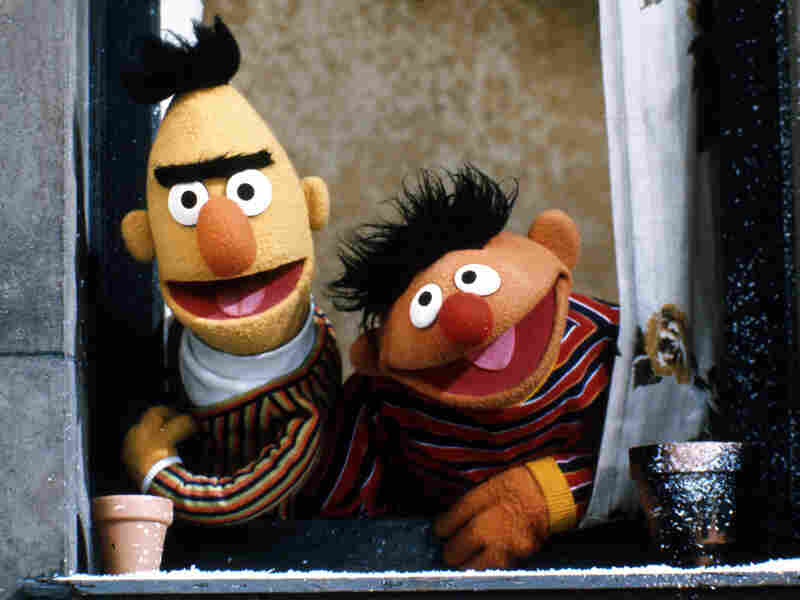 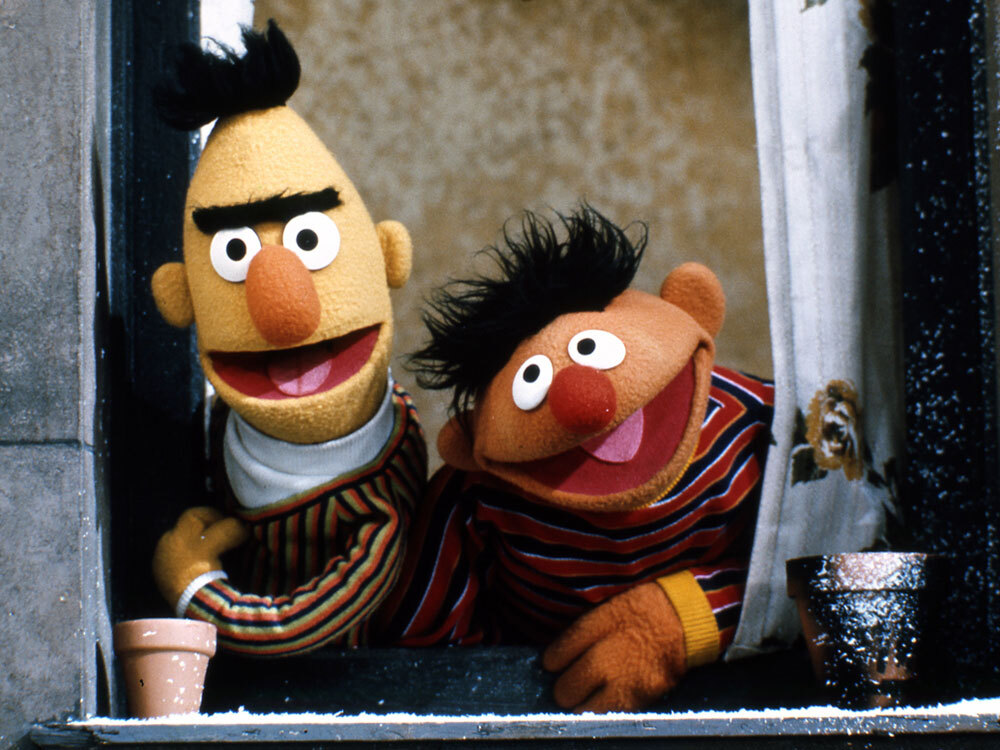 I watch and write about TV for a living, and it's all Sesame Street's fault.

As a kid in the '80s, I'd sit on the living room floor eating raisins, ready for my first appointment TV. Mister Rogers looked right at me as he talked. He definitely made me feel special. But Sesame Street was more complex.

The pinnacle of its mix of fantasy and gritty reality came when Big Bird learned about the actual death of the man who played the character Mr. Hooper, Will Lee. But every moment on Sesame Street was designed to be educational, so even its ridiculousness had a very clear point, like when Cookie Monster ate Kermit's props.

Watching Kermit deftly manage Cookie Monster's problem with impulse control, I was inspired to think about what I was watching. I could laugh at Cookie Monster, but learned that there was something to take away from his behavior, too.

Now, when I watch Mad Men, and Don Draper impulsively cheats on his wife with a flight attendant, I react emotionally, but I also do what Kermit taught me — consider what Don's behavior means.

Sesame Street taught me one enduring lesson: to always expect TV to mean something.

I've been writing a memoir about my relationship with reality TV, and I've realized that my desire to be both an observer and a participant started on that very street.

Other TV shows have captivated me since then, and whether I'm watching as a viewer or a TV critic, I now know that thinking critically makes TV even better. Some people don't get this. They'll e-mail me and write, "It's just a show." But as Sesame Street has proven for 40 years, sometimes a show is more than just a show.