Accessibility links
The Dirt On Dust Where does all that dust under your couch come from? It turns out that most household dust comes from outside — and may contain some pretty harmful stuff. How the toxins in dust get into your body depends on the size of the dust particle. 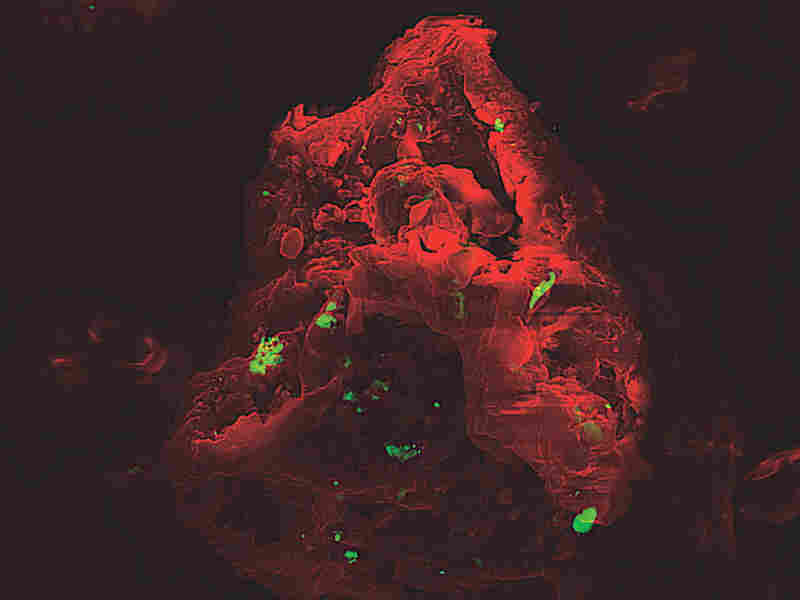 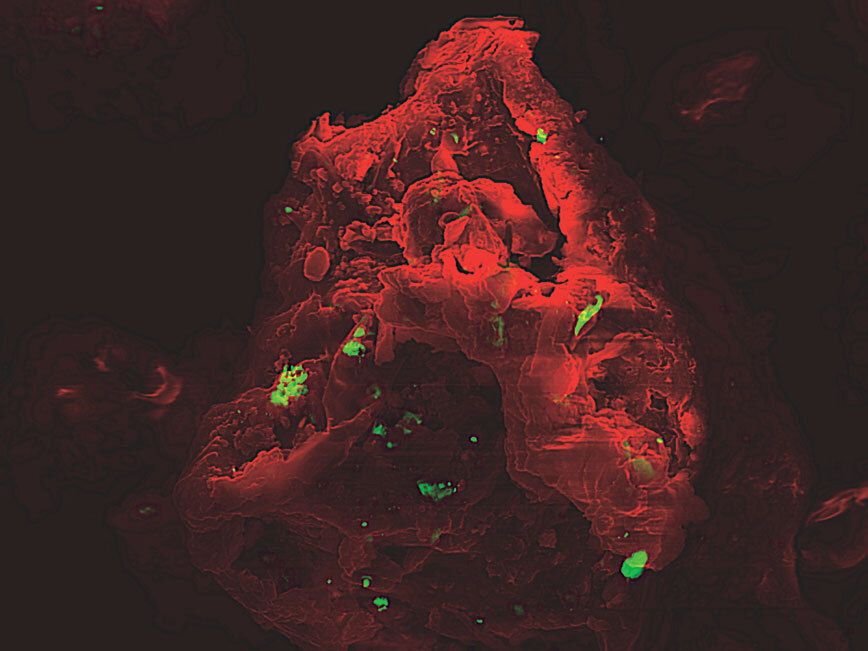 A close-up composite image of a dust particle. The green patches contain bromine, calcium and/or iron.

When you get right down to it, dust is pretty complicated. It also may be affecting your health.

Paloma Beamer of the University of Arizona spends a lot of her time thinking about dust — what it's made of and where it comes from.

Where Does Dust Come From?

Beamer says there are really only two places dust can come from: outdoors and indoors.

We are an important part of the process of getting the outdoor stuff indoors. We bring it with us when we enter a house — through "soil particles that come in on your shoes," says Beamer, or tiny particles suspended in the air when we open the door and walk in.

Then there's the indoor component of dust. "Like pieces of your carpet fiber or your furniture, your bedding, or anything like that that starts decaying," she says.

Then there are organic contributors. "Skin flakes and the dander off your pets, and other insects or bugs that might be in the home."

Now, as anyone who's looked under a sofa knows, there's dense dust and there's fluffy dust.

"A lot of the fluffy things, I think, tend to do more when you get a lot of fibers. In my house, it comes from cat hair," Beamer says.

Beamer's interest in dust stems comes from her effort to measure people's exposure to toxic substances. In a recent paper in the journal Environmental Science and Technology, she calculates the proportion of dust that's from indoor sources, compared with the amount from outdoor sources. She figures that one-third comes from indoor inorganic sources like carpet fibers. "Two-thirds comes from both soil tracked in, and the outdoor air particles," Beamer says.

She says it's important to know these ratios, because it will give a measure of the potential exposure people have in their houses when they live near a toxic waste site.

How the toxins in dust get into your body depends on the size of the dust particle.

Andrea Ferro of Clarkson University in Potsdam, N.Y., is also a dust expert. She says some of the particles are small enough that they can float in the air, and we can get them into our lungs. Others are larger and tend to sink to the ground. Some are simple, made of only a single organic or inorganic compound. Others are complex.

"So you could have a particle that has an inorganic center and then an organic coating. So it can be very complicated," Ferro says.

One thing that's remarkable about dust is that it sticks around. Without vacuuming, Ferro says, it can stick around for a long time.

"We're finding things like [the pesticide] DDT in many floor dust samples," says Ferro. "We banned that decades ago, but it's still there."

In addition to breathing in dust though your nose, you can also ingest it by mouth. Heather Stapleton of Duke University studies the environmental chemicals that wind up in dust. You may not be in the habit of licking the floors or carpets in your home, but some younger members of your household might be doing essentially that.

"As a parent of a 6-month-old, I can't tell you how many times I look at my son, and I see him with his hands in his mouth all the time, or picking up a toy and putting it in his mouth," says Stapleton. "It's really difficult to quantify what mass of dust you're actually exposed to and any contaminates associated with that dust. But it definitely occurs."

Stapleton says she is trying to quantify this route of exposure. Her work focuses on a flame retardant that was banned from children's pajamas because of its potential toxicity. But it's still used in furniture and foam cushions, and somehow it's leaching out of those items and finding its way into the dust of a house.

Stapleton says there's a lot of work to be done in the world of dustology.

"Our understanding of how much dust a person is exposed to is very limited."