Accessibility links
Cubans Warily Test Their New Freedom To Criticize Cuba's state-run economy has been in crisis mode for years, but it now faces some especially sobering arithmetic. With trade falling and debt stacking up, President Raul Castro has warned Cubans that the island's socialist system must change. And he's asking them for something they're not used to giving in public: criticism. 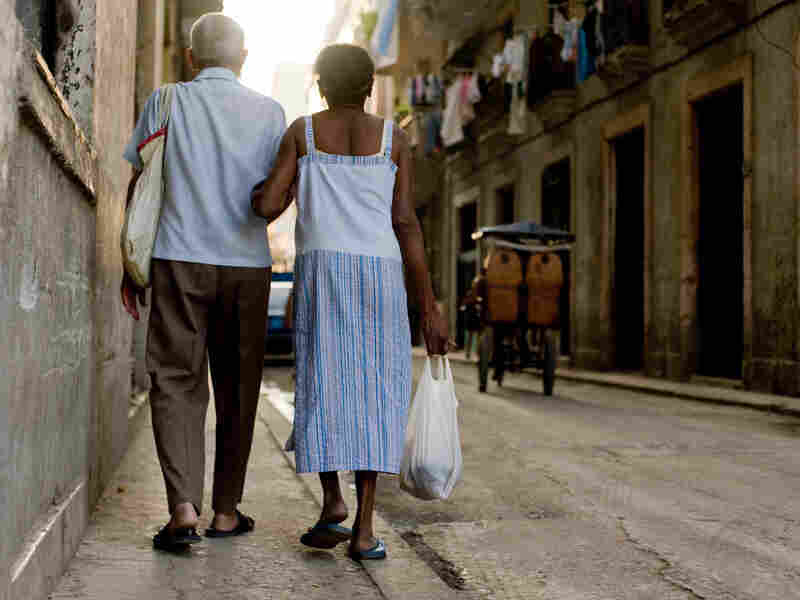 A Cuban couple returns home from a governmen food store in Havana on Wednesday. For decades, Cubans have been using a ration book system for food. Adalberto Roque/AFP/Getty Images hide caption 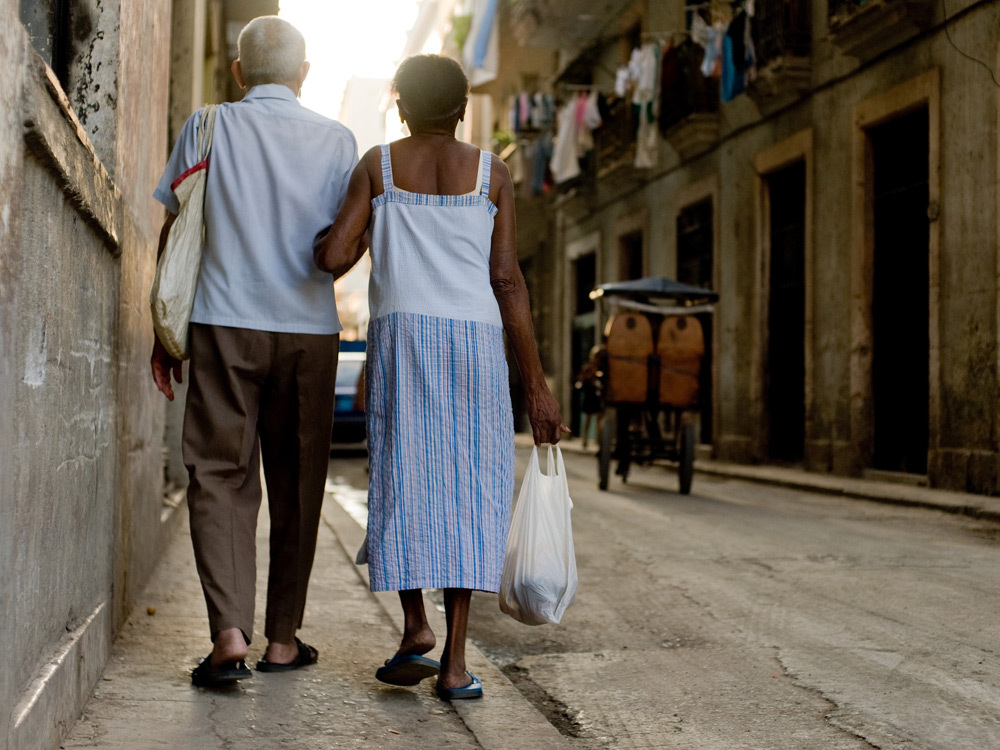 A Cuban couple returns home from a governmen food store in Havana on Wednesday. For decades, Cubans have been using a ration book system for food.

Cuba's state-run economy has been in crisis mode for years, but it now faces some especially sobering arithmetic. With trade falling and debt stacking up, President Raul Castro has warned Cubans that the island's socialist system must change.

And he's asking them for something they are not used to giving in public: criticism.

In the dark driveway of a Havana apartment building, neighbors are gathering around a single light bulb and a Cuban flag. They have come for a meeting of the local Committee for the Defense of the Revolution — a neighborhood organization founded in part to root out anti-government subversion.

Now the group is tasked with collecting criticism of Cuba's socialist system and ideas for how to reform it. Similar discussions are being held across the island, as communist authorities urge Cubans to work harder, expect less and speak freely about the country's nagging problems.

Aurelio Alonso, deputy editor of Cuba's Casa de las Americas journal, says he thinks Cuba's economy must face major changes. Like many Cubans who say they support the government but want it to change, he believes the state should allow for more small businesses and cooperatives.

Alonso says simply asking Cubans to work harder for no new benefits is an empty formula. "Now, all that we are doing is we have our leaders on the screen of the TV saying, 'You have to produce more,'" Alonso says.

"In the history of society I don't remember any situation where economic accumulation has advanced because some charismatic leader says, 'You have to produce more.' "

Major changes to Cuba's one-party system are not on the agenda for discussion. That was also the case in 2007, the last time Cuban leaders asked for public input.

Since then, the government has made limited reforms, but Cuba's economy remains overwhelmingly state-controlled. Inefficiencies are compounded by U.S. trade sanctions. Cubans are left to cope with chronic shortages, meager salaries and a smothering state bureaucracy.

In a cramped Havana apartment building, former diplomat Miriam Leiva remains wary of the government's new openness to criticism, but she says she is beginning to see changes.

"For decades people didn't express themselves because they knew that the security police or the informers were listening and were going to tell on them," she says. Leiva's husband, dissident economist Oscar Espinosa Chepe, spent two years in prison for his opposition activities. 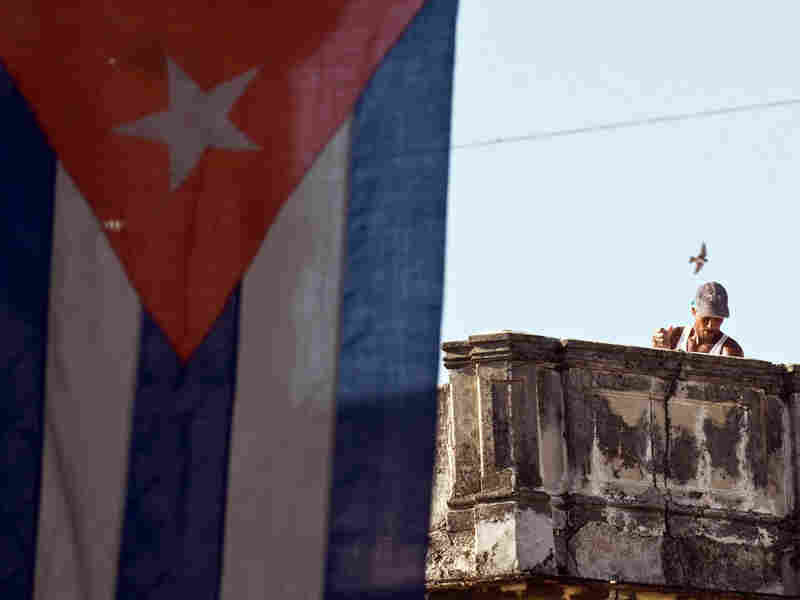 Cubans are being asked to offer their own thoughts about economic reforms. AFP/Getty Images hide caption 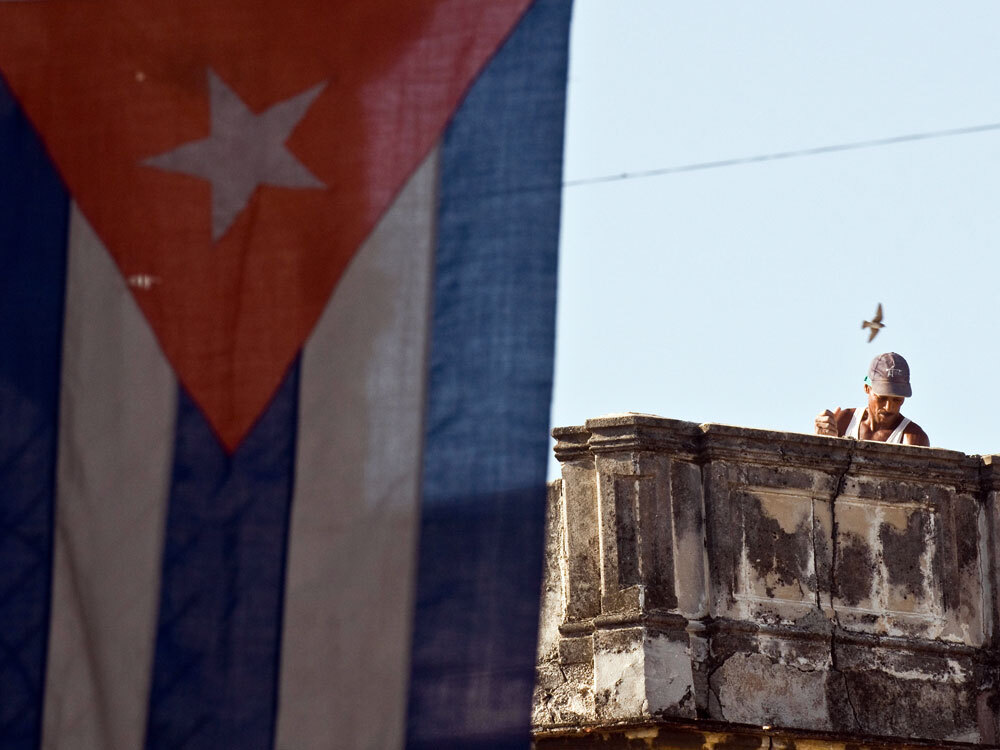 Cubans are being asked to offer their own thoughts about economic reforms.

"But little by little, since the situation is so harsh, since they have so many personal problems ... they started to open up, to talk, and this has been a way of liberating themselves and this is a step to ask for more and to demand for their rights," she says.

Leiva still worries the criticism could be used against people in the future. But she said open discussions are a step toward a more open society.

"I think that the government, Raul Castro, wants to know what people feel and think and what they hope for," Leiva says. "He also knows that people need to express themselves to feel a little better. It's not that I think that he wants to change everything, but at least he knows that even to preserve his power, he has to makes changes."

A Culture Of Paternalism

The proposal that has caused the biggest stir would eliminate the ration system that provides every Cuban, regardless of income, with about two weeks' worth of food. Most of it is imported, at great cost to the government.

One of Castro's top officials recently likened some Cubans to "baby birds," waiting to be fed by their "Daddy state," a remark that upset many who say it's the government's fault for creating a culture of paternalism.

Social worker Ariel Dacal says he lives in a neighborhood where poor families couldn't survive without the government food basket.

As a committed socialist, Dacal worries that if the economy is liberalized but little else changes, Cuba will follow a Chinese or Vietnamese model that eventually leads to capitalism. And that would squander the sense of solidarity and social commitment the Cuban Revolution has built over decades.

The Cuban Revolution needs its own revolution, he says, one that will bring more democratic participation to politics, the economy and every facet of daily life. That, he says, is the only way for the Revolution to save itself.