Accessibility links
Writing Study Ties Autism To Motor-Skill Problems Researchers who looked at handwriting samples found that children with autism struggle more than their peers to correctly form letters. The findings add to evidence that autism is a brain disorder that isn't limited to behavior, but affects motor skills, too. 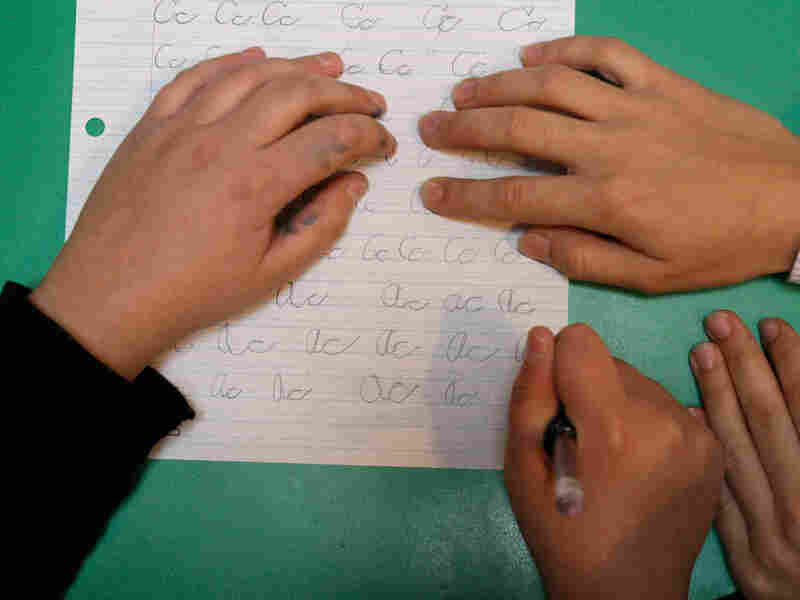 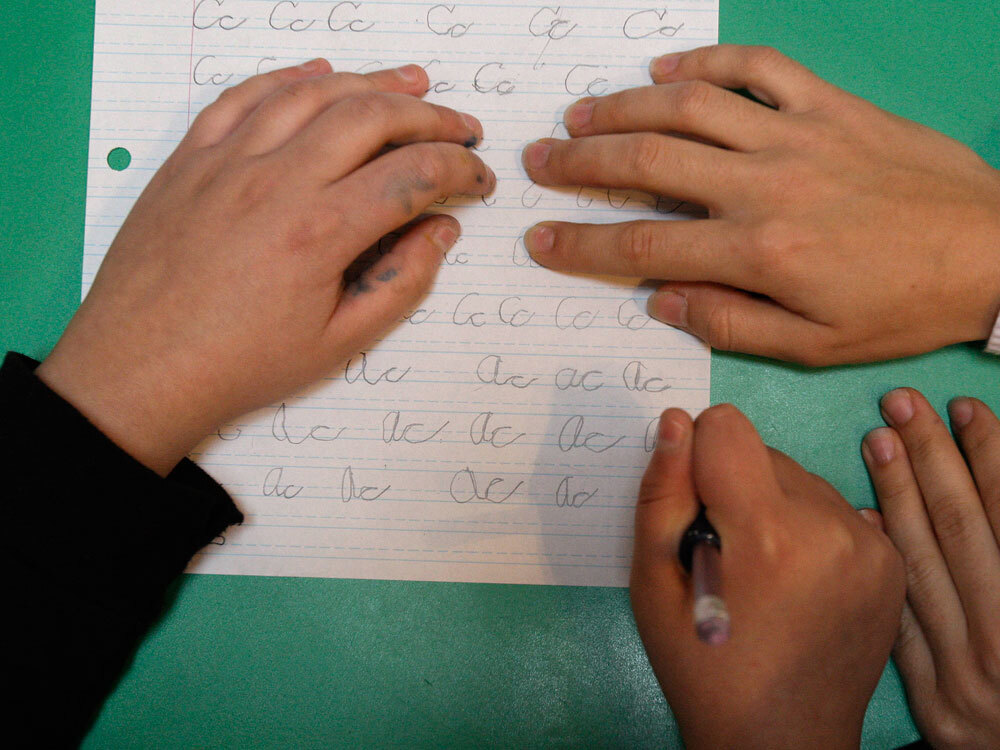 Shayan Forough, a child with autism, practices writing letters with an instructor at his home in Kirkland, Wash., last Oct.

Many children with autism not only struggle with social skills and communication, they also have great difficulty with handwriting, according to a new study in the journal Neurology.

Researchers compared 14 typical children with 14 diagnosed with mild autism — and found that the children with autism had much more difficulty forming letters.

"It was really striking," says Amy Bastian, a neuroscientist who directs the Motion Analysis Laboratory at Kennedy Krieger Institute in Baltimore.

The finding offers scientific evidence of something parents have been saying for years, says Barbara Wagner, whose son Austin, 14, was one of the children on the autism spectrum who took part in the study.

Wagner says Austin's struggle with handwriting began when he got to first grade.

"He would have nights when it took three hours to do homework," she says. Austin is bright and understood the assignments, Wagner says. What was hard for him was the act of writing.

"He doesn't actually write like you or I would write," Wagner says. "He draws his letters. It was almost painful to watch."

And Wagner says things got even worse when he had to do written exercises in class. All the other students would be done, while he was still writing. 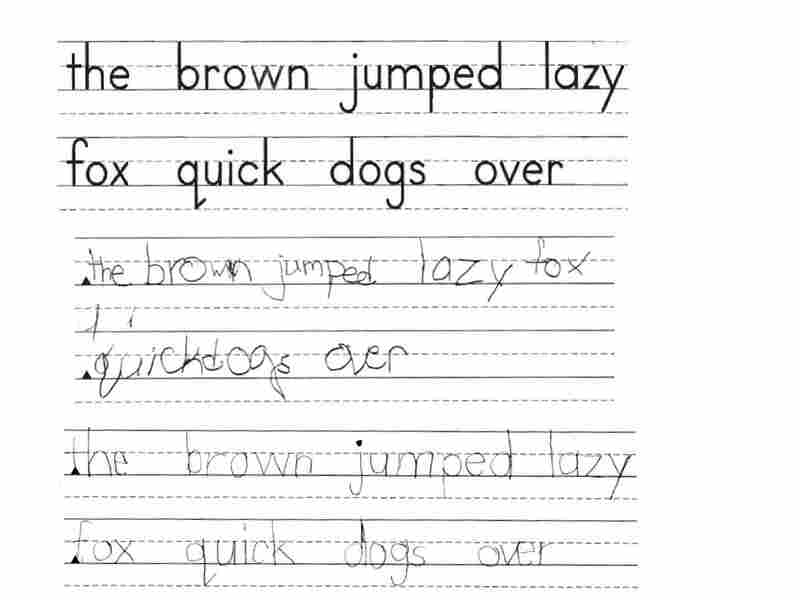 As a part of the stduy, the sentence at the top was copied by children with and without autism. In the sample shown, both of these children have autism, however the middle handwriting sample scored much higher. American Academy of Neurology hide caption 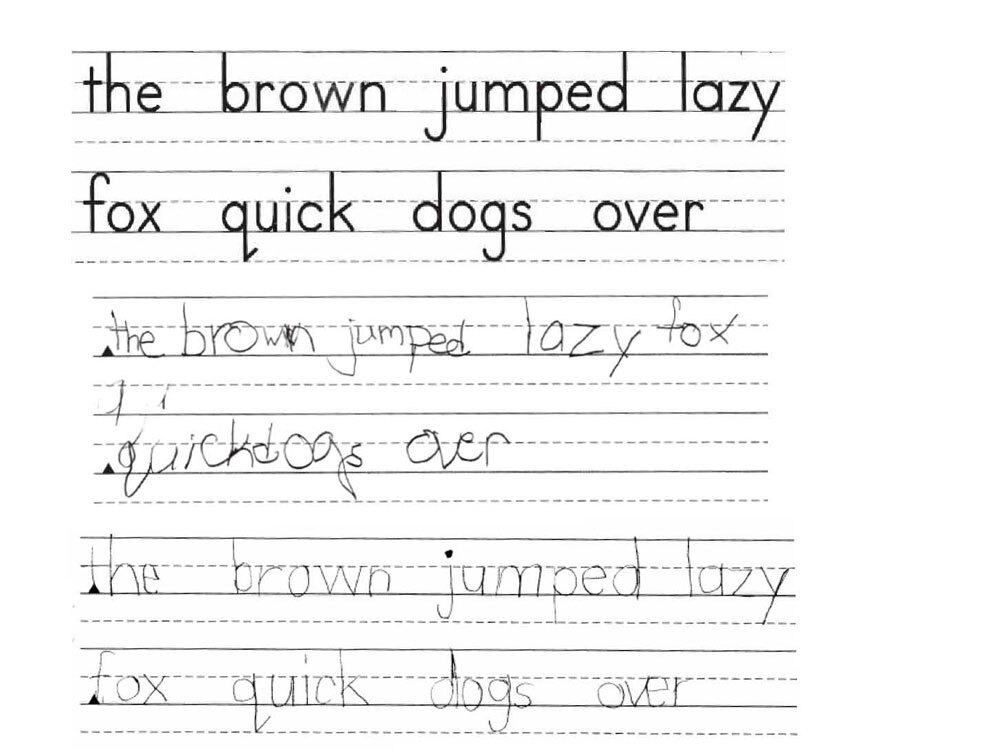 As a part of the stduy, the sentence at the top was copied by children with and without autism. In the sample shown, both of these children have autism, however the middle handwriting sample scored much higher.

Things got better for Austin when he was diagnosed with Asperger's syndrome and his school allowed him to answer questions verbally, or type on a keyboard.

The handwriting issue on its own is a major impediment for many children with autism, Bastian says. But it's also indicative of a much larger problem with motor skills, she says. Many have trouble holding a fork, buttoning a shirt, or tying their shoelaces.

And these problems with motor skills may carry over into social interactions, Bastian says.

Bastian says a lack of motor skills can also make it harder to communicate through subtle gestures and facial expressions. And people who can't make these gestures and expressions themselves often have trouble understanding what they mean when other people use them. The inability to read faces and gestures is a hallmark of autism.

Other researchers say motor skills may offer a way to help spot children with autism as early as the first few months of life.

A study of babies who were later diagnosed as autistic were late reaching milestones such as sitting up, standing on their own and walking, says Dr. Sarah Spence, a pediatric neurologist at the National Institute of Mental Health who helped conduct the study.

Spence says writing and all of these other skills rely on a process called motor planning, in which the brain gets itself geared up to carry out an action such as walking or talking.

So it's possible that some nonverbal children with autism actually want to speak, but lack the motor planning capacity.