Accessibility links
Soldiers Project Aims To Heal War's Mental Scars The Soldiers Project, founded by clinical psychiatrist Judith Broder, provides free counseling not only to service members returning from war — but to their families as well. The private service also offers a way for troops to get help if they're reluctant to seek it within the military system. 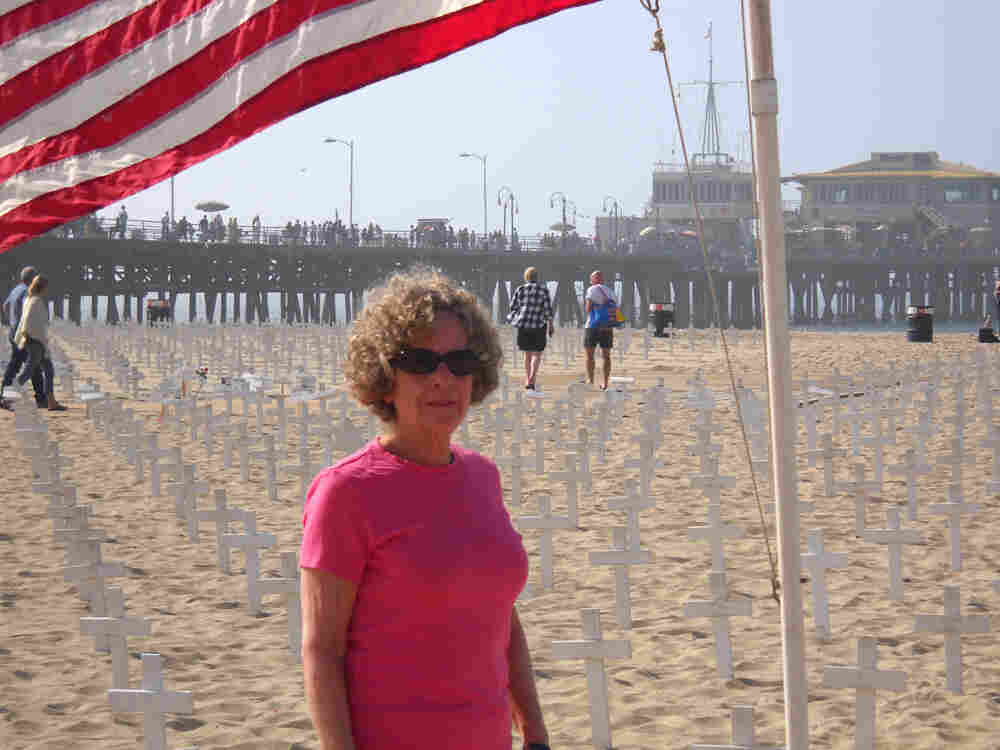 Judith Broder, founder of the Soldiers Project, stands on a Santa Monica beach near a makeshift memorial known as "Arlington West." The Soldiers Project provides free counseling not only to service members returning from war — but to their families as well. Gloria Hillard for NPR hide caption 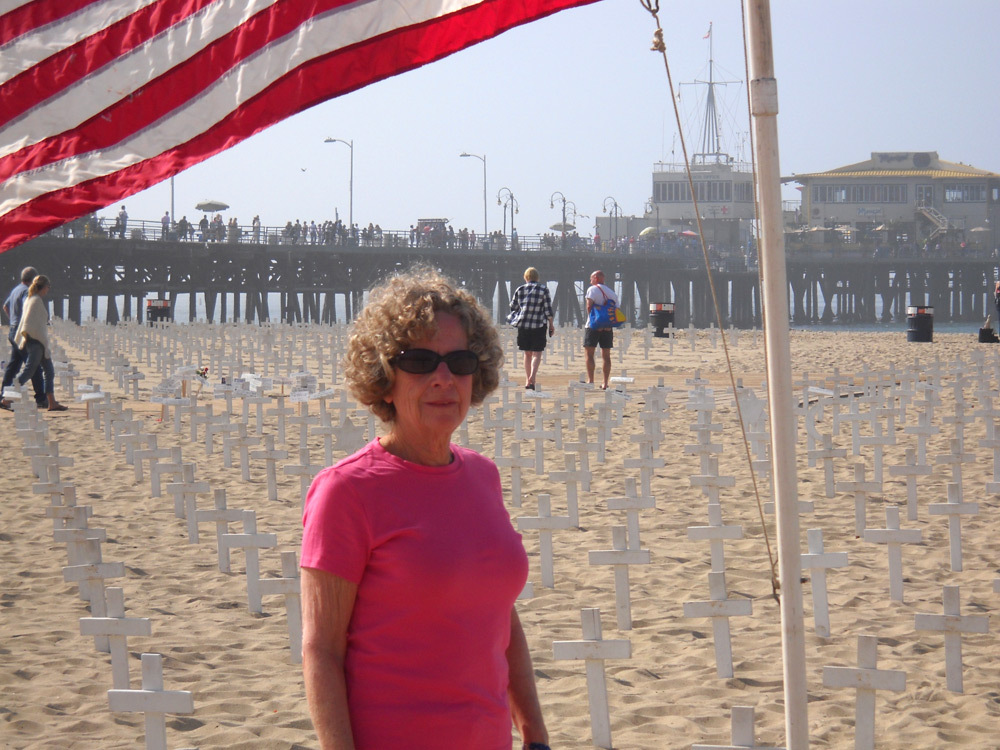 Judith Broder, founder of the Soldiers Project, stands on a Santa Monica beach near a makeshift memorial known as "Arlington West." The Soldiers Project provides free counseling not only to service members returning from war — but to their families as well.

The early morning fog has lifted on a Santa Monica beach, revealing thousands of wooden crosses in the sand. Someone is playing a flute next to an American flag flying at half-staff.

Judith Broder, 69, bends down next to one cross and attaches the name of a soldier killed in Iraq. The first time she saw the makeshift memorial, known as "Arlington West," was four years ago.

"I didn't know exactly what it was, but I did know that it brought tears to my eyes," she says.

Veterans of the war in Iraq experience effects that are not always obvious. Natalie Mariano, a doctor at the Veterans Affairs Primary Care Center in Hyannis, Mass., shares her experience.

Around that same time, Broder saw a play in Los Angeles called The Sand Storm: Stories from the Front. Written by a Marine, it featured monologues of those who served in Iraq and Afghanistan.

"The most horrifying aspect of it was the sense that I got that these were really just ordinary everyday guys, and they had seen things and done things that just shattered their whole sense of themselves," says Broder. "And that they would all need help."

That's when Broder, a clinical psychiatrist, put her retirement plans on hold and founded the Soldiers Project. It provides free counseling not only to service members returning from war — but to their families as well.

Today, the Soldiers Project has more than 200 licensed therapists nationwide — all volunteers who have received specialized training in everything from combat-related traumas to military culture.

Clinical psychologist Barbara Schochet is now assistant director of the organization. "We have seen clients with combat trauma or other post-deployment issues," she says. "Sometimes we even see them while they're deployed and they're home for their R and R."

Rossana Cambron says it's not something you're ever prepared for — your child coming home from war. The Southern California mother of four sought help from the Soldiers Project when her son returned from his first deployment to Iraq. He's now on his second tour.

"It's so much emotional pain. As a parent, you almost have your own PTSD to deal with," she says. "He had flashbacks, he had nightmares, he had the drinking — you know, the heavy drinking to try to fall asleep. And many of the things that they told me on how to react, I did. I can't tell you how thankful I was to have that information."

While both the departments of Defense and Veterans Affairs have PTSD and mental health programs for service members, Pat Alviso of the anti-war organization Military Families Speak Out says the Soldiers Project helps those who may be reluctant to seek help within the system.

"One of the things that we've noticed is that some of the men and women that are in the military ... are just really unsure whether or not if they ask for help, whether it's going to be on their records," says Alviso. "They're afraid of that stigma."

Dana Rene Varab, 26, a staff sergeant in the Army National Guard, reached out to the Soldiers Project for help three years ago.

"I will say if I didn't do that, I probably wouldn't be sitting here right now talking to you," she says.

At the age of 19, she was deployed to Iraq. The experiences of the war — especially the sounds — followed her home. One day a car backfired on the freeway.

"I literally had a flashback and almost hit a median, because that backfire reminded me I was getting mortared or something was happening behind me," says Varab. "As far as the combat trauma, it's definitely there, but it's being dealt with."

Broder says war leaves a scar that takes a long time to recover from. "I would say it this way: The need is going to be there for a long, long, long time."