Accessibility links
Flood Of Immigrants To Long Island Sparks Tension People born and raised in Suffolk County, N.Y., complain about dozens of people living in single-family homes; immigrants complain that they are victimized by locals. An Ecuadorean day laborer was murdered last year, allegedly by teenagers who said they regularly looked for immigrants to bash.

For decades, the eastern half of Long Island swam in a sea of red sauce. Italian restaurants dotted nearly every strip mall. Now, the mozzarella has some competition.

A recent TV spot that aired in Long Island shows three men sitting around a deli table. The first says in a thick Long Island accent, "Are you kidding? Mi Ranchito has the best pupusas!" The second man indignantly shoots back, "Whadda you know? You think Carleone's has the best empanadas!"

That public service announcement lightheartedly calls for harmony between whites and Hispanics in a community where a flood of immigrants from Latin America has created tension and sometimes violence.

One year ago, an Ecuadorean day laborer named Marcelo Lucero was stabbed to death. The defendants are seven high school students who said they went out about once a week looking for immigrants to bash. They called it "beaner hopping."

According to the U.S. Census Bureau, Suffolk County's Hispanic population has grown by 40 percent since the millennium. In many towns, a sight has become common that was rare a decade ago: groups of men standing on street corners, waiting for work.

Suffolk covers the half of Long Island farthest from New York City. It includes summer towns where celebrities own multimillion dollar weekend homes, and working-class villages where people raise their families.

Louise Scarola lives in one of those villages, a town of 17,000 called Farmingville.

"I won't really go to a 7-Eleven where there's 50, 60 guys standing out there in the morning," Scarola said on a recent walking tour of her neighborhood. "I'm just not comfortable with that."

She and her husband share a modest house with two dogs on a quiet street. She points to a crumbling shell of a home where, she says, 64 people lived in a 900-square-foot house. The landlord took in $10,000 a month and rented beds out in shifts.

"Somebody got a bed for so many hours a day, and somebody else got that same bed for so many others," Scarola says. Because there was only one toilet in the house, people used the backyard. "So there were multiple holes dug that people would urinate and defecate in."

The town eventually cracked down on this landlord and others who were doing the same thing, but Scarola says there are still crowded homes in the neighborhood.

Signs of the immigrant tide are everywhere. Down the street, a few dozen men gather around a truck. Representatives from a Spanish language church are handing out hot chocolate and brochures.

When Scarola asks whether they have anything in English, the man haltingly replies that their handouts are only in Spanish. Scarola wishes them luck, and the man replies, "God bless you."

"I don't have anything against these people," says Scarola. "They're human beings like you and me. They're not subhumans because they come over the border to make a better life and help their families."

Scarola says that when people in her neighborhood do a home renovation, they don't necessarily seek out a contractor who only uses documented workers. Instead, they go for the cheapest price they can find, regardless of who's doing the work.

"Then these may be the same people that are out there screaming, 'Deport them.' So it gets to be hypocritical," Scarola says. "I mean, obviously [immigrants] wouldn't be here if there weren't jobs for them."

That is the crux of the issue, says Matthew Crosson. He's president of the Long Island Association, a consortium of businesses and community groups that promotes development in the region. From a business perspective, Crosson says, immigrants keep Long Island's economy afloat. He argues that without them, countless restaurants and landscaping businesses would close.

"The reality is, given the outflow of younger people on Long Island, those jobs simply would not be done in this community," he says. "Anybody who says that there are plenty of Long Islanders who could be filling those jobs is just incorrect factually. That is not the case."

'This Is My Community'

Elaine Kahl does not dispute that argument. But, she says, "If we need people here, we do it legally."

Kahl grew up in Suffolk County, and she is now co-chair of a group called The Suffolk County Coalition for Legal Immigration/No Amnesty. She wants every worker to be documented.

Kahl lives in the vacation mecca of Southampton. It's a playground for the rich and famous, with huge lawns and swimming pools that need a lot of maintenance. In the past, high-schoolers might have done those jobs, but Crosson says that's no longer the case.

"Things have changed," says Crosson. "Kids don't go running around mowing lawns, and you don't get kids who are going to bury their arms up to their elbows in hot dishwater."

Kahl is disturbed by the changes to her community. "Where is it written that people can just come in and sit down and settle in, and not be accountable to anybody?" she asks.

"I believe that what we're on a path for here is very frightening," Kahl says. "The end of that path is mob rule — complete breakdown of our society."

With strong voices on both sides of the immigration divide, a cold Thursday night in Farmingville found a group of whites and Latinos standing side by side, just struggling to get by. 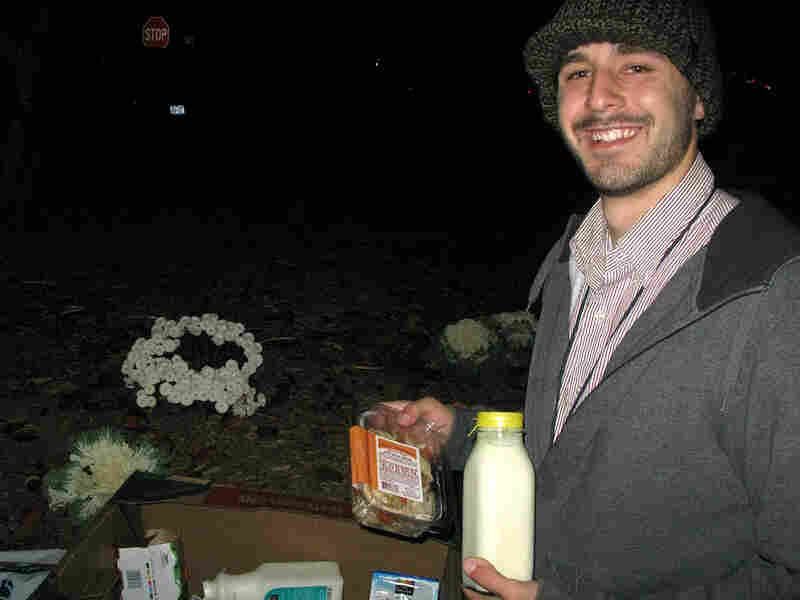 Jon Stepanian distributes groceries with the group Food not Bombs in Farmingville on Long Island. On the group's first night out, a woman called the police when she learned illegal immigrants were receiving the free groceries. Marisa Penaloza/NPR hide caption 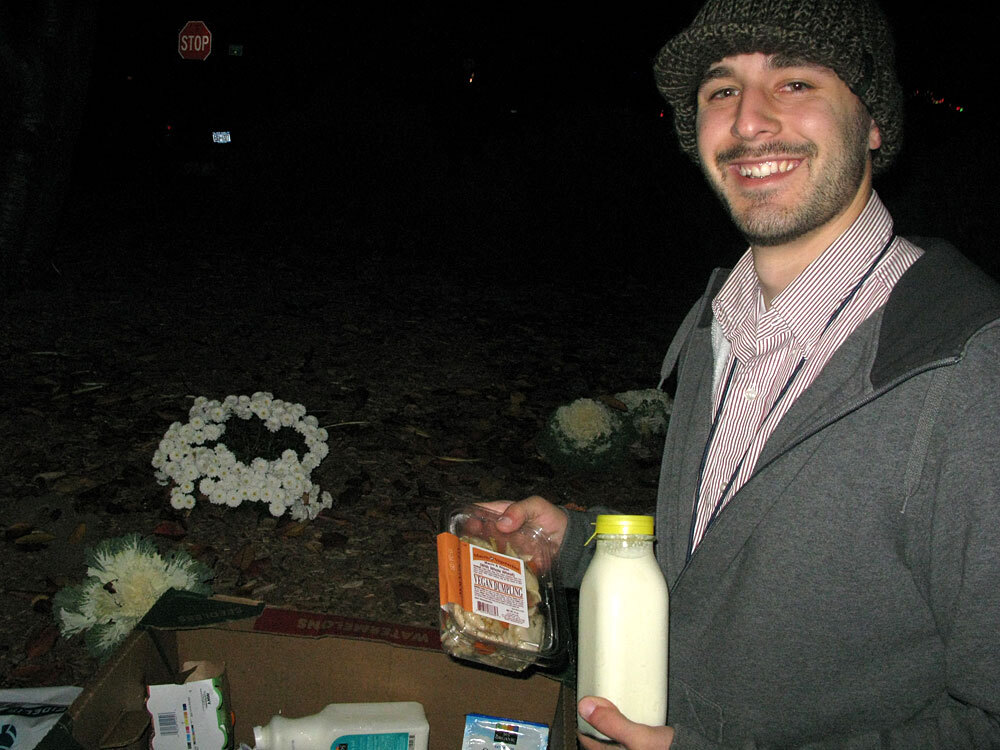 Jon Stepanian distributes groceries with the group Food not Bombs in Farmingville on Long Island. On the group's first night out, a woman called the police when she learned illegal immigrants were receiving the free groceries.

The group Food not Bombs hands out fresh groceries here once a week. There are boxes full of pomegranates, bananas, broccoli and cauliflower — roughly 2,000 pounds of food on this night, all donated by local farms and supermarkets.

There are at least as many people speaking English as Spanish. One woman pulls a birthday cake out of a box and asks whether anyone is having a birthday. Jon Stepanian, another volunteer, oversees a box full of dairy products. "This is plain yogurt," he says to a Hispanic mother carrying a young child. "You can mix in different flavors, like strawberries or whatever."

When Stepanian helped start this program in June, he had no intention of engaging in an immigration debate. The debate found him.

"The first woman that drove up said, 'This is great bread!' and she started putting bread in her bag," says Stepanian. "She started talking to us, and she goes, 'Do you feed the illegals?' We said, 'We feed everybody. The food's free. We think food's a right.' She goes, 'You can't do that, though. This is my community!' "

The situation became tense. The woman eventually called the police, and the police said the group could stay.

Immigrant rights activists in Suffolk County say Latinos have grown accustomed to a low-grade hostility. People spit and shout at immigrants. Day laborers who ride bicycles say cars have driven them off the side of the road.

Speaking in Spanish at a hiring site for day laborers, an immigrant from Guatemala named Giovanni Garcia described injuring his hand while loading a trailer at a work site.

"My boss told me if I took him to court he'd call immigration to have me deported," Garcia says. "I told him, 'Bring it on.' My boss didn't call immigration and didn't pay for my medical treatment. I had to pay for it."

There are also high-profile acts of violence. Two immigrants were beaten nearly to death in 2000. A few years later, attackers firebombed a Mexican family's house. The violence seemed to culminate with the Marcelo Lucero murder, almost exactly one year ago. Now the Justice Department is looking into whether the local police have a pattern of ignoring hate crime allegations.

That investigation is the subject of Part 2 of this story, on All Things Considered.