Accessibility links
Demystifying The Quince Those who haven't discovered the beguiling fragrance and subtle flavor of the quince might turn up their noses at the rock-hard, waxy-skinned fruit in the market. But the holidays are high time for a revival of this nostalgic relative of apples and pears. 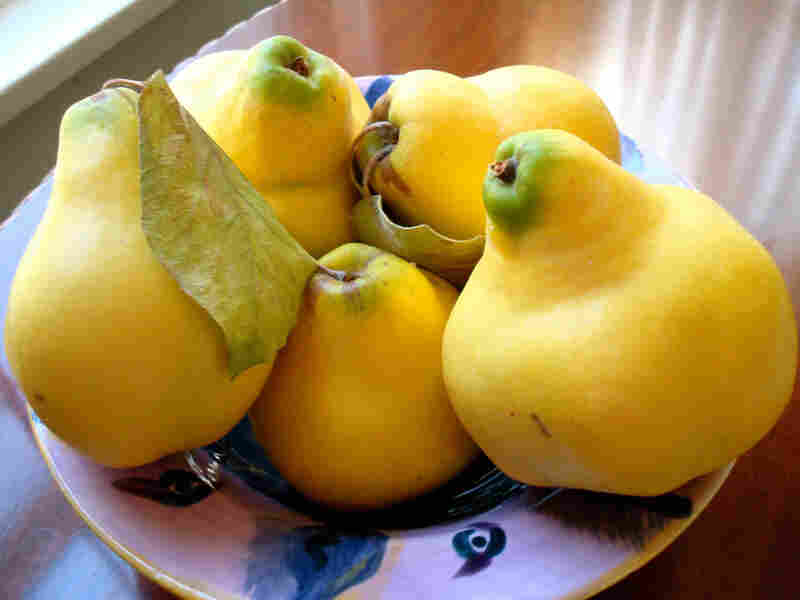 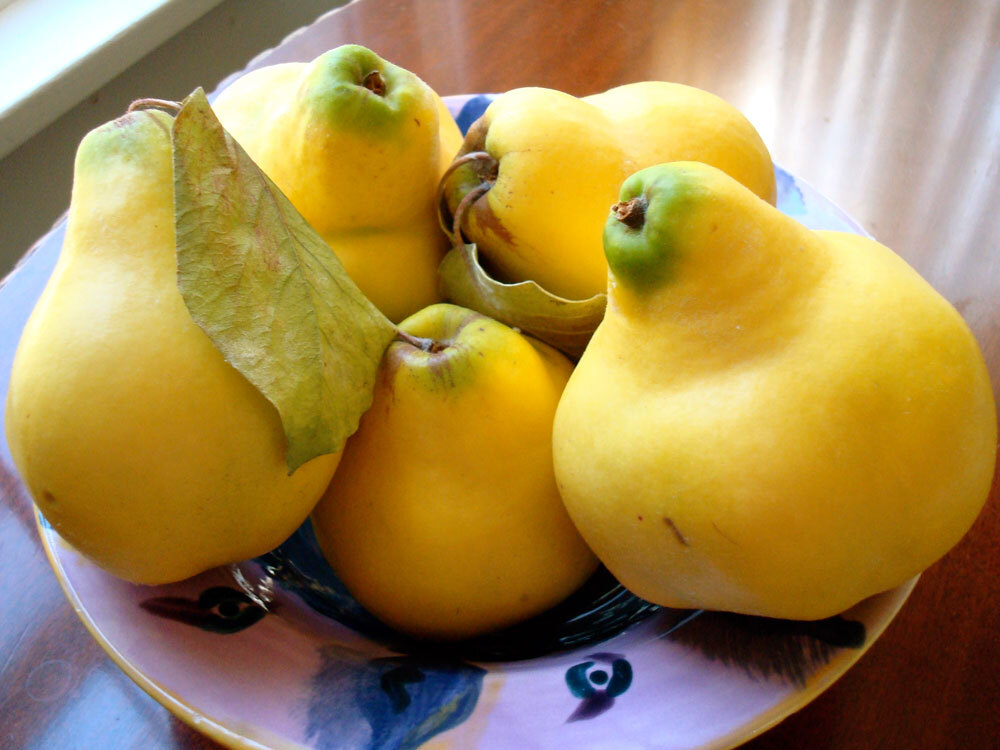 Until recently, I had never seen a fresh quince. I knew quince paste, or membrillo, from Spanish cheese plates. I knew that Korean friends boiled down quince juice into a tea.

However, since moving to Oregon I've found quinces at the local farmers market and even growing on trees in my neighborhood. In fact, it turns out that the most diverse quince grove in North America, if not the world, thrives at a U.S. Department of Agriculture gene bank just down the road.

Still, close proximity to quinces doesn't necessarily give you the nerve to try the rock-hard, acerbic fruit. But last spring, I had my quince revelation. Just one bite of the tangy, poached morsel on a charcuterie plate had me counting the days until this fall's season.

In late September, I huddled beside our market director, staking my claim on her orchard's first-to-ripen crop. She even spikes her apple cider with quince.

I began more humbly, slipping the peeled fruit into a pie. With their beguiling fragrance and subtle flavor, quinces naturally partner with their more universally beloved pome sisters, apple and pear.

Revered since antiquity, quinces are still treasured all over the globe. With their high pectin content, quinces lend themselves to jellies, pastes and preserves. ... Now, underground enthusiasts are reviving the nostalgic fruit, hoping it can resurge.

A quince is a fruit of contradictions. It's generally too astringent to eat raw, yet it smells so guava-sweet. Its white, dry, hard flesh blushes and softens, without turning mushy, when cooked. It has tough, waxy skin that bruises more easily than you'd think.

Revered since antiquity, quinces are still treasured all over the globe. With their high pectin content, quinces lend themselves to jellies, pastes and preserves. The word marmalade, after all, derives from the Portuguese name for quince.

In the United States, quinces were common in the garden and in the kitchen from colonial days through the 19th century, until the advent of commercial gelatin and pectin. Americans instead turned to sweeter, eat-out-of-hand fruits.

Laura McCandlish is an Oregon-based freelance writer. She contributes to The Oregonian's FOODday section and hosts a monthly food show on Portland radio station KBOO. She blogs at baltimoregon.com.

One key question divided the devotees: Can a quince be eaten raw? Yes, evidently — depending on the variety. That weekend, we walked among the hundred or so clones at the USDA orchard, sampling some quite palatable ones from their native Caucasus region. They tasted juicy and crisp, with notes of raspberry and star fruit. No chalkiness. On hand was famed fruit sleuth and food writer David Karp, who advocates biting right into the sometimes elusive, sweeter-fleshed quince. He hopes an apple-like variety brought here from Peru will soon be tested and rolled out for commercial cultivation.

Many fans agree with cookbook author Barbara Ghazarian that the quince is "the quintessential slow food," whose magic is only revealed through cooking. She just published a culinary tome devoted to the forbidden fruit (botanists believe the quince, not an apple, was Eve's true Garden of Eden temptation). Drawing on the recipes of her Armenian ancestors, Ghazarian includes savory preparations, such as lamb-stuffed quince dolmas and a sweet-tart quince and parsnip stew.

She, like many chefs, recommends poaching quinces over a low flame for several hours. Try simmering slices of them in a sweetened white wine syrup (think Riesling), with a touch of vanilla bean and citrus zest. Reusing the poaching liquid for subsequent batches only intensifies the sections' ruby color. Cooking the quince coaxes out the anticarcinogen anthocyanins, those purple pigments also found in berries. These jewels then caramelize when baked into a tart.

By now you're thinking, great, you live in the Mediterranean-like Willamette Valley, where quinces flourish. Where can I buy them? Try upscale grocers and ethnic markets, which ship them in from California. The San Joaquin Valley grows most of the country's quinces, primarily the most common Pineapple variety, on a scant couple of hundred acres. That's all we demand.

But first, search for ones from your local apple or pear vendor. They're readily available at farmers markets in the East. Unfortunately, quinces fall prey to fire blight in humid parts of the country. More ubiquitous are flowering quince shrubs, a different genus from the fruit-bearing Cydonia oblonga. They do, however, produce small pomes that can be substituted in some recipes.

With a season that runs through December, quinces make an aromatic holiday centerpiece. How can you tell they're ripe? Rubbing off their fuzz should reveal a bright, yellow peel. Better yet, just follow your nose. A quince's perfume should fill a room.

This recipe comes from canning maven Linda Ziedrich, author of The Joy of Jams, Jellies and Other Sweet Preserves (Harvard Common Press 2009). The fruit leather-like texture and taste is similar to Mexican guava paste. Go Middle Eastern by adding a whisper of cardamom and rose water. Serve it with blanched almonds on a cheese plate. Pair it with salty Stilton or manchego cheese for a tangy grilled panini. I even topped pizza with the paste and fresh figs. 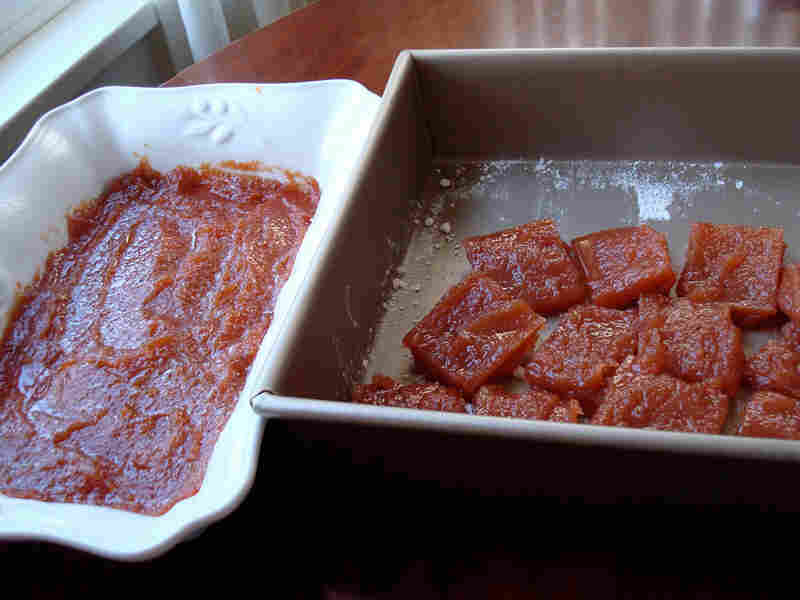 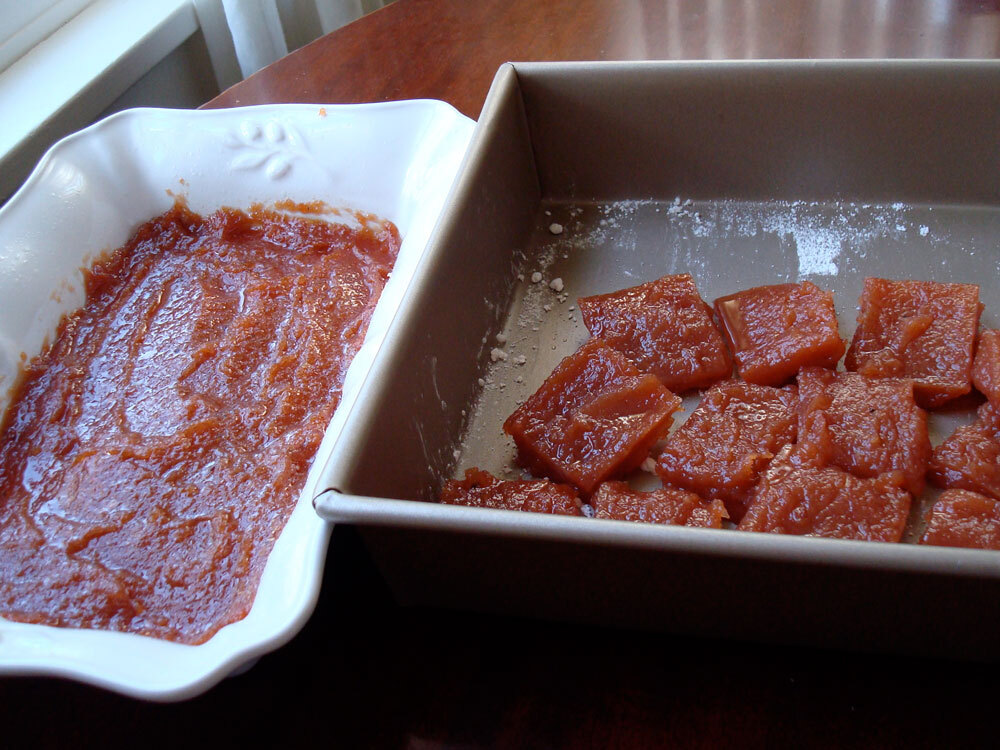 2 pounds quinces (about 3 cups), quartered but not seeded or peeled

Combine the quinces and water in a pot. Over low heat, simmer the quinces, covered, until they are tender, about 20 minutes. Remove the pot from the heat and let the quinces cool a bit. For a redder paste, let the quinces stand at room temperature for 8 to 12 hours.

Scoop out the seeds from each quince piece and discard them. Pass the fruit and any juice through the medium screen of a food mill. (If you don't have a food mill, peel and core before cooking. Then puree in a food processor, to an applesauce-like consistency at this stage.)

Put the puree into the pot along with the sugar (and the crushed cardamom, if desired). Heat the mixture over low heat, stirring, until the sugar is completely dissolved. Simmer the mixture, stirring often at first and almost constantly toward the end, for 40 minutes or more. When the paste is ready, you'll have to hold onto the pot to keep it from sliding around as your spoon leaves a clear path across the bottom. Stir the rose water into the paste, if desired.

Pour the paste about 3/4-inch thick into lightly oiled ceramic ramekins or an 8-inch square cake pan with vertical sides. Let the paste cool and then turn it out to dry in a warm place, perhaps in your oven on its lowest setting, or in the sun.

When the paste is dry to the touch, after about 2 hours, cut it into smaller pieces if you like, and wrap the pieces in plastic or waxed paper. Unless you'll be eating the paste soon or you're sure it's thoroughly dry, store it in a heavy-duty plastic bag in the refrigerator, where it should keep for several months.

"Queen of Quince" Barbara Ghazarian includes this "curiously sweet" recipe in her new cookbook Simply Quince (Mayreni Publishing 2009). These two "ugly duckling" foods blend together into a beautiful stew. The aromatic dish would grace any Thanksgiving table. Serve it over rice, bulgur pilaf, couscous or even, as I did, polenta. 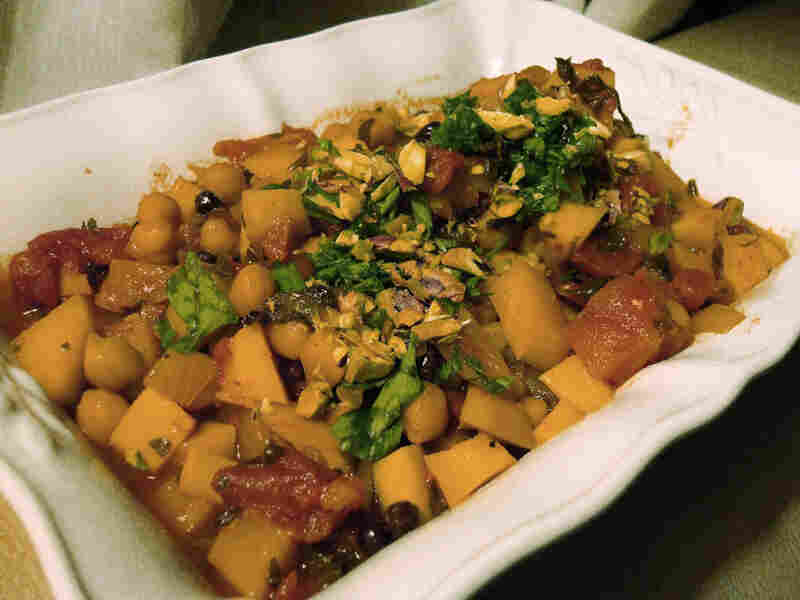 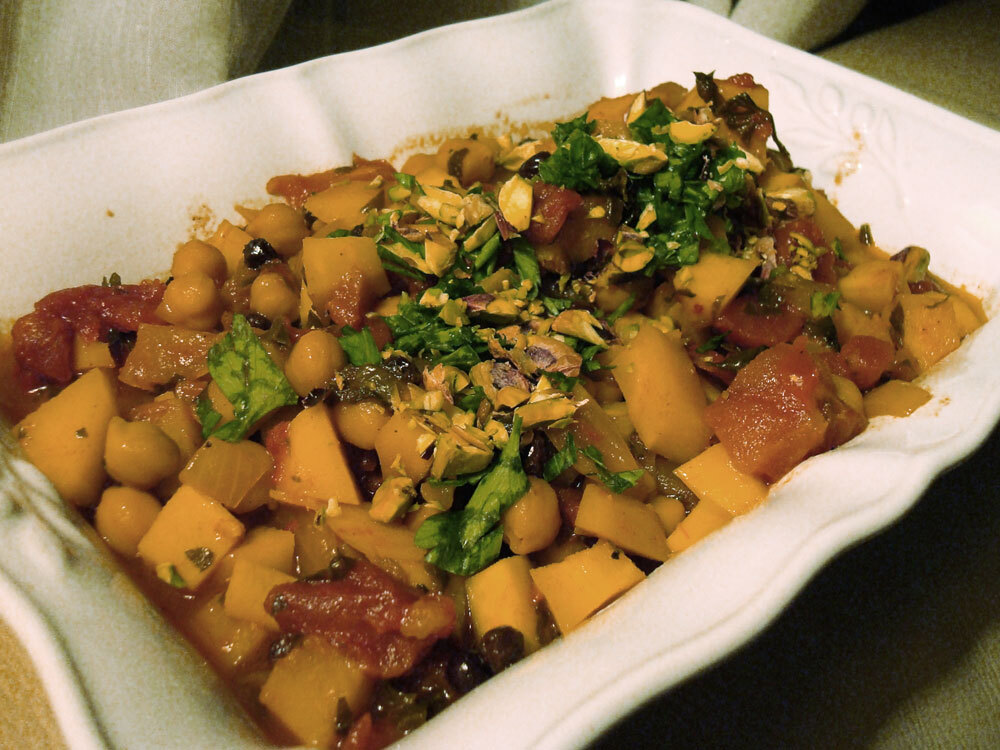 One 15-ounce can garbanzo beans, drained

Saute the onion in the olive oil in a large heavy-bottomed pot over medium heat until the onion begins to brown, 8 to 10 minutes. Add the tomatoes, curry, cinnamon, salt, black pepper and red pepper flakes. Simmer, stirring occasionally, for about 5 minutes. Add the parsnips, quince, garbanzos, parsley, currants and broth.

Cover and simmer, stirring occasionally, for 1 1/4 hours, or until the parsnips and quince are tender throughout. Adjust seasonings to taste. Sprinkle with pistachio nuts, if desired, and serve.

Vegetarian chef Deborah Madison features several quince recipes in her Local Flavors cookbook (Broadway Books 2002), including this brew. Make up a batch just in time for cold season. The medicinal, emollient-coated quince seeds are used to soothe sore throats the world over, so why waste the cores? 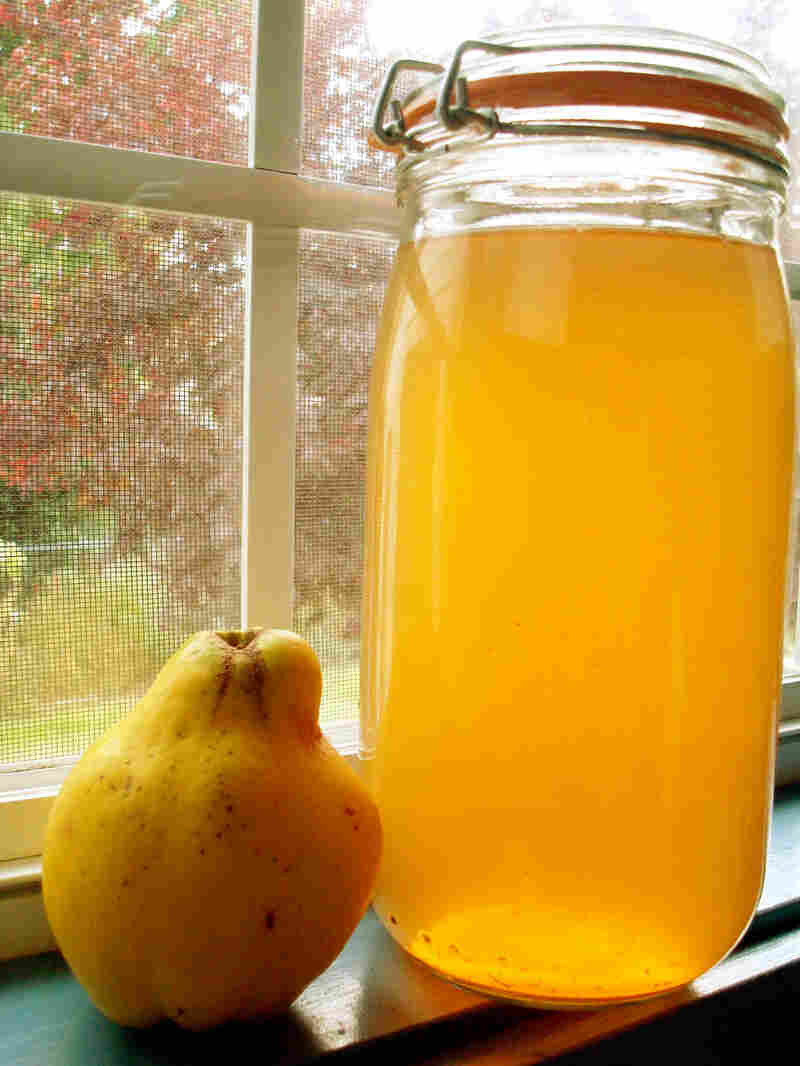 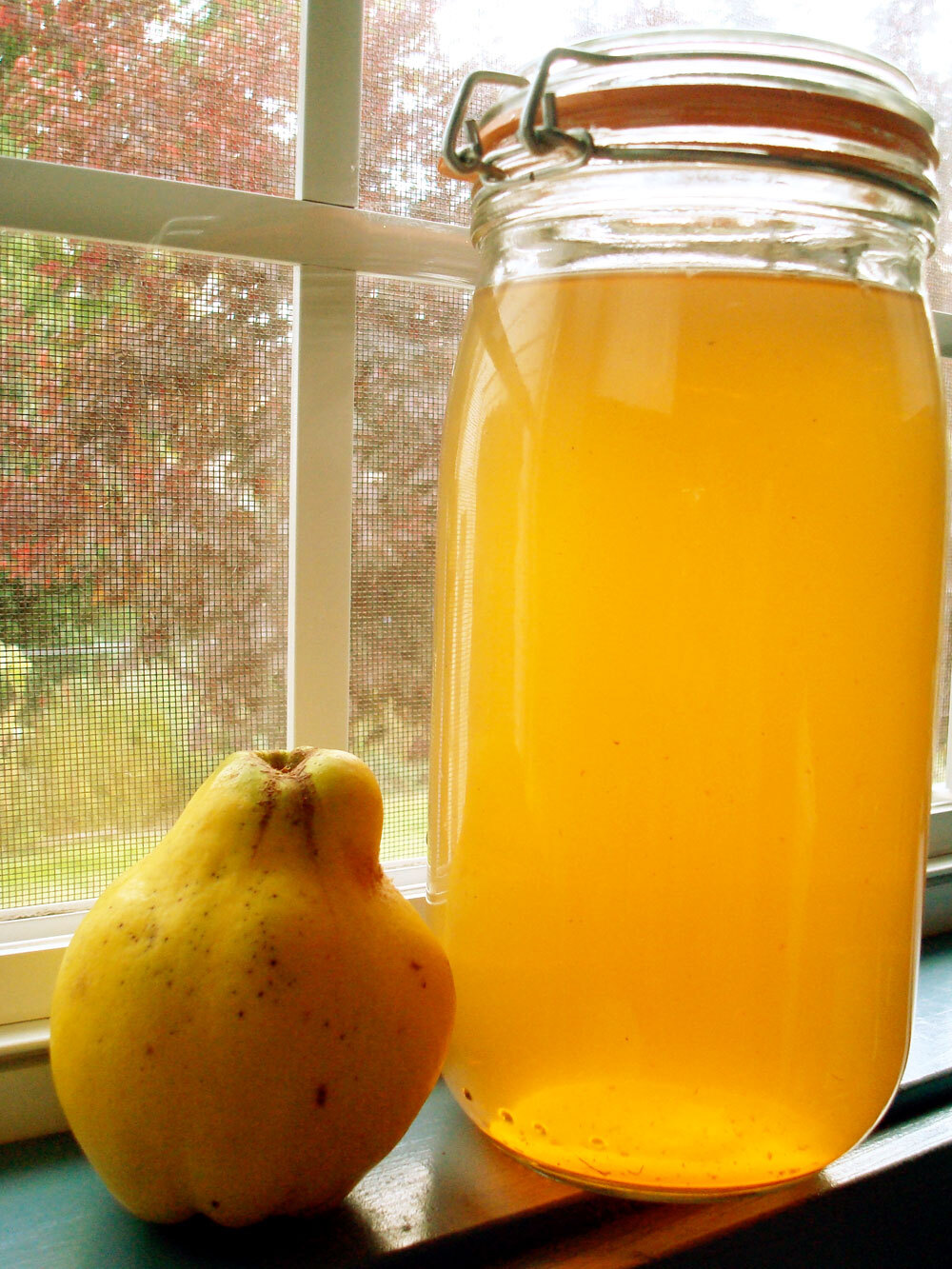 Put the skins, cores and pips in a saucepan with water. Bring to a boil, then simmer until the liquid is syrupy and reduced to about 1 quart. While still warm, strain and sweeten to taste with honey.

Refrigerate in a clean jar. Sip warm or cold when you feel the need for something soothing on your throat. The tea keeps in the refrigerator for several months.

Georgeanne Brennan resurrects this old recipe in her new cookbook Gather (Sasquatch Books 2009). Using quince yields a rosy syrup and zing that apples can't match. Garnish each piece with a dollop of sweetened creme fraiche. I used whole wheat pastry flour for the crust. My topping didn't adequately caramelize because I couldn't find my Pyrex pie dish; use a glass one if you can, so you can watch as it bakes. 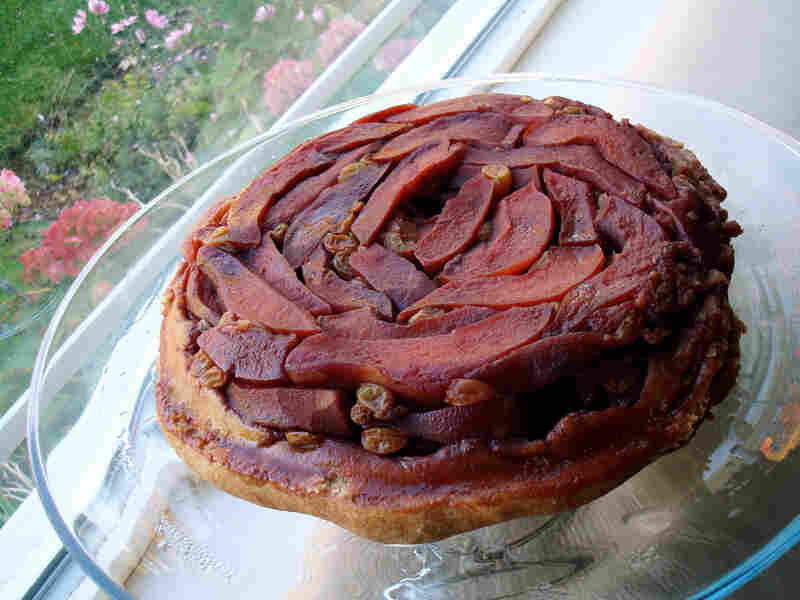 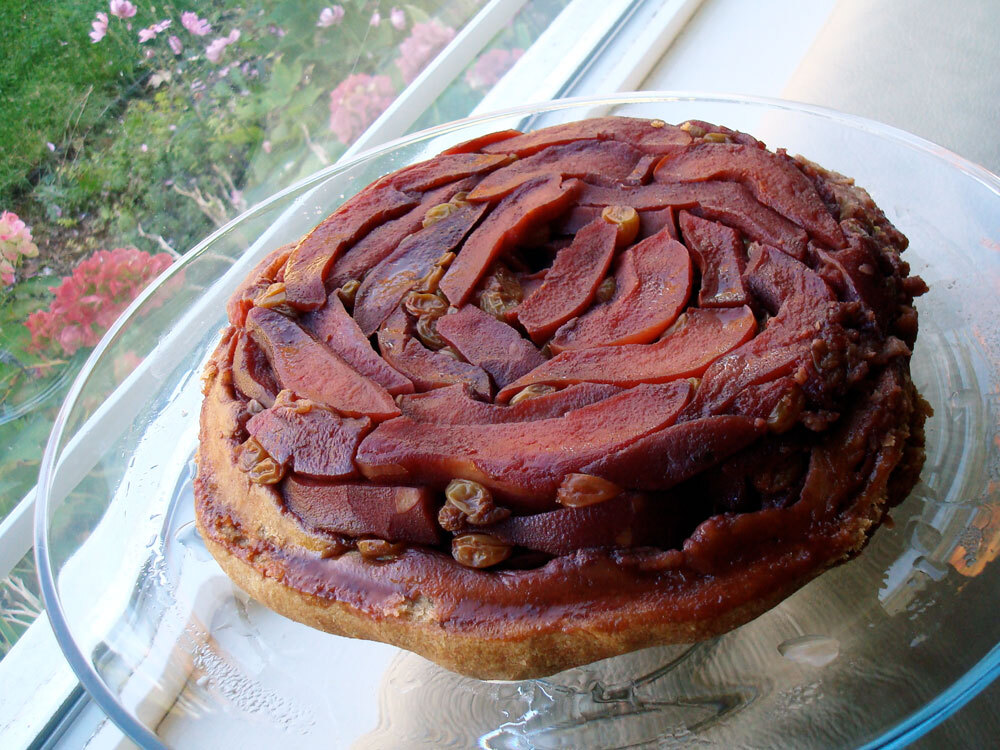 Peel and core the quinces and cut them into slices about 3/8-inch thick. In a large bowl, combine the wine, sugar and vanilla bean. Add the quinces and raisins. Cover and let the quinces marinate overnight at room temperature, turning them several times to ensure an even color.

Combine the flour and salt in a food processor and pulse once or twice. Add the butter and pulse only until pea-sized bits form, about 45 seconds. Add the water 1 tablespoon at a time, pulsing just until a ball of dough forms, about 1 minute. Gather the ball, cover it in plastic wrap and chill in the refrigerator for 15 to 30 minutes.

Using 1 tablespoon of the butter, heavily grease a baking dish 9 or 10 inches in diameter and 2 to 2 1/2 inches deep. Sprinkle the bottom with 1/4 cup of the sugar.

On a lightly floured board, roll out the pastry dough 1/8-inch thick and just a little bit larger than the diameter of the baking dish. Drape the pastry over the rolling pin and transfer it to the baking dish. Unfold it and gently place it over the quince, tucking the dough inside the dish. Press the edge of the crust gently against the sides of the dish. Lightly prick the pastry all over with a fork. Bake the tart until the crust is golden and a thick, garnet-colored syrup has formed in the bottom of the baking dish.

When the tart is done, remove it from the oven and let it stand just a few minutes. Run a sharp knife between the pastry crust and the edge of the baking dish to ensure that nothing is sticking. Invert a serving platter on top of the baking dish, and, using a hot pad, hold the platter and the dish firmly together and flip them over, so the dish is upside-down on the platter. The tart will unmold itself onto the platter. Should any slices of quince stick to the bottom of the baking dish, simply replace them on the tart. Serve warm.