Accessibility links
Movie Review - 'Fantastic Mr. Fox' - The Dazzle Is In The Details Director Wes Anderson's first foray into animation, The Fantastic Mr. Fox, is based on the charmingly wicked children's book by Roald Dahl. The film follows a battle of wits between the sly fox (voiced by George Clooney) and three formidable farmers. Critic Kenneth Turan says the film's stop-motion animation is tailor-made for the sort of quirky details that Anderson employs. 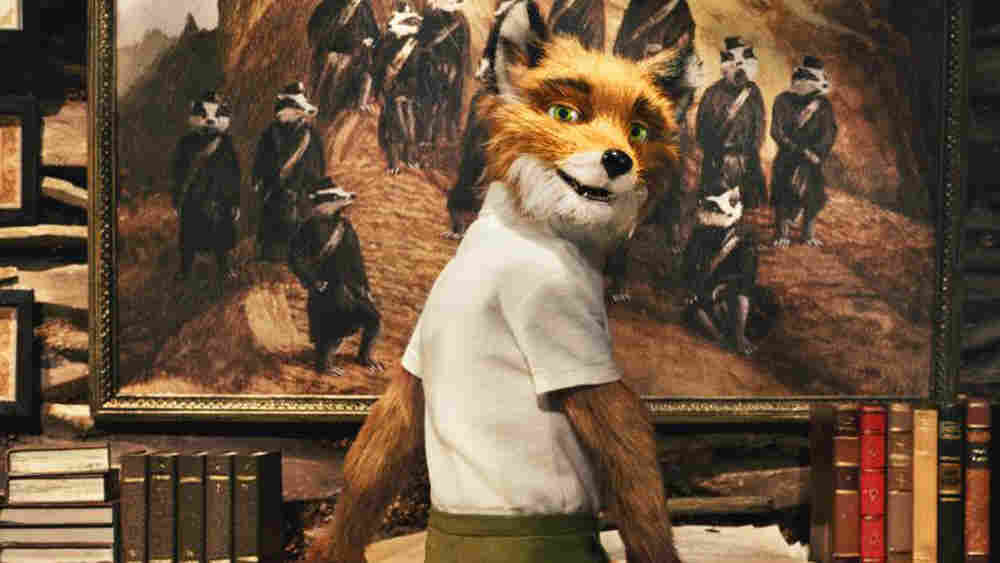 Fantastic Mr. Fox goes to your head like too much champagne — which is what you'd expect with George Clooney and Meryl Streep voicing Mr. and Mrs. Fox, the Nick and Nora Charles of the forest world.

The film follows the plot of the Roald Dahl book, which is a battle of wits between the larcenous title character and the combined forces of Boggis, Bunce and Bean. They're not a law firm, but three of the meanest, nastiest, ugliest farmers in Mr. Fox's part of the world. And the richest.

Mr. Fox swore off robbing these three once he and Mrs. Fox became parents, but he still has the yen. Working with Kylie the Opossum, an old partner in crime, Mr. Fox plans that film-noir movie staple, One Last Job that will set him up for life. Mrs. Fox, not surprisingly, is unamused when she catches them in the act.

As written by director Wes Anderson and Noah Baumbach, the film's ultrasophisticated characters do run the risk of sounding a little too arch. Then again, they're animals, which is a big help when it comes to keeping things grounded.

Fantastic Mr. Fox has been made in the painstaking process known as stop-motion animation, a technique that's brought all kinds of things (giant peaches, dogs named Gromit) to life over the years. Here it reanimates the career of filmmaker Anderson, whose love of quirky details is tailor-made for this.

Stop-motion allowed Anderson to create his own very specific environment, complete with animal puppets that sport real hair and an autumnal palette with no use at all for the color green. He even found places for his usual cohort of actors — people like Bill Murray, Jason Schwartzman and Owen Wilson — as voice talent. "I'm a wild animal and a husband and father," our hero declares, and this movie succeeds because of its ability to strike the right balance between those poles.