Accessibility links
The Decade In Music: Jimmy Eat World's 'The Middle' (2002) Mainstream rock was in dire straits in the early 2000s, but out of a world of jaw-wired-shut self-plagiarizers and rap-rockers came arguably the power-pop anthem of the decade. Jimmy Eat World's "The Middle" is a hopeful, energetically poppy punk song about being yourself. 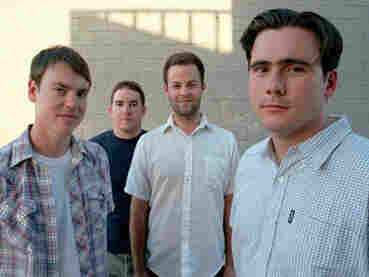 Jimmy Eat World's Bleed American had a sweetness and sincerity missing in the Top 40 rock of the time. Chris McCann hide caption

Mainstream rock was in dire straits early in the decade. Any semblance of former alt-rock glory had long since morphed into a string of jaw-wired-shut self-plagiarizers and ploddingly angry rap-rockers. So how did a band like Jimmy Eat World — already dropped from one major label — come back and write arguably the power-pop anthem of the decade?

Self-funded before the band even had another label lined up, Bleed American was released less than two months before the attacks of Sept. 11, 2001. The chaotically rocking title track didn't take off as a single, and the name Bleed American didn't play well in the fall of '01, so Jimmy Eat World made the album a self-titled effort. The future wasn't looking terribly bright for the group, but then "The Middle" happened.

Maybe something snapped in the public consciousness, but "The Middle" captured a need for celebration in the form of a perfectly crafted pop song. Jimmy Eat World had always drenched past records in dreamy atmospherics and heart-on-sleeve confessionals, but Bleed American favored simplicity. Released as a single near the end of 2001, "The Middle" — an energetically poppy punk song about being yourself — took off in a big way in 2002. It was a high-school outcast's anthem with a start-stop hook that hiccuped its way through the chorus; who could resist? The accompanying music video even encouraged fully clothed non-conformity in a sea of underwear-clad young people. (Seriously.)

Despite a recent tour in which Jimmy Eat World performed the starry-eyed album Clarity in its entirety, Bleed American still holds up as the group's finest album. Its sweet sincerity was missing in Top 40 rock music back then — and, to some extent, it still is.