Accessibility links
Growing Disenchantment Over Afghan War In U.K. British Prime Minister Gordon Brown is facing heavy criticism for his handling of the war in Afghanistan. In one town, which has begun an unofficial tradition of mourning British soldiers as the coffins are driven through the streets, support for the troops is universal, but many residents question the Afghanistan mission. 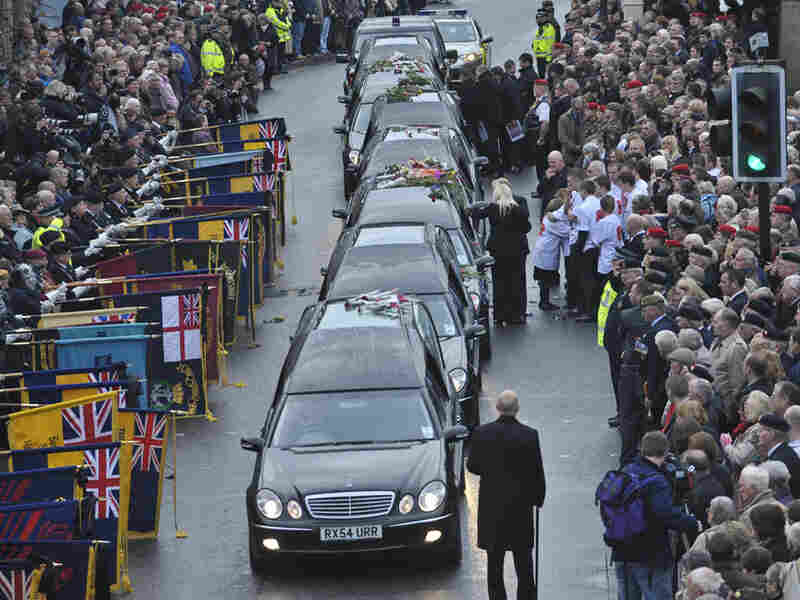 Mourners in the town of Wootton Bassett place flowers on the cortege carrying the coffins of five soldiers killed in Afghanistan. Ben Birchall/Press Association/AP hide caption 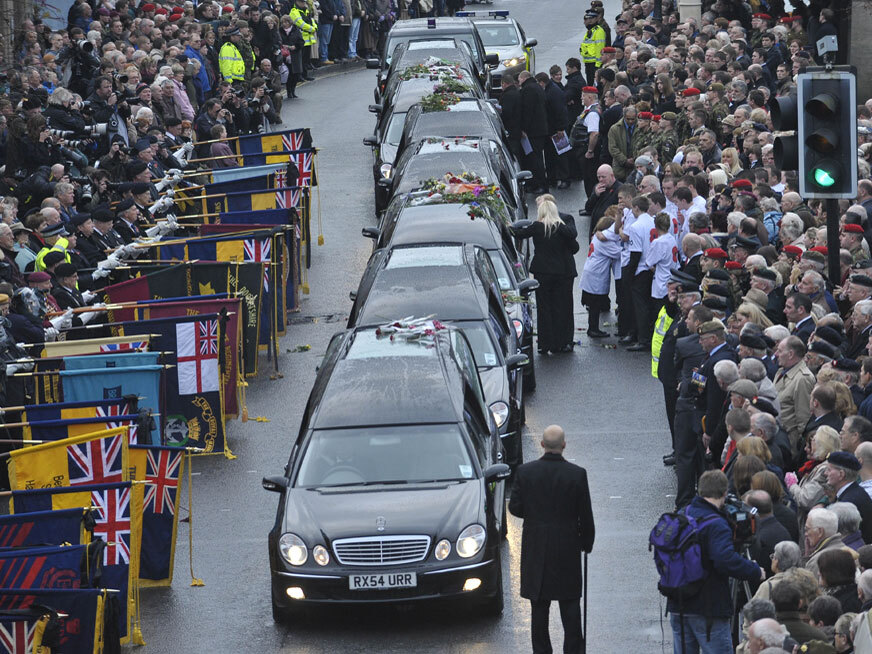 Mourners in the town of Wootton Bassett place flowers on the cortege carrying the coffins of five soldiers killed in Afghanistan.

British Prime Minister Gordon Brown is facing heavy criticism for his handling of the war in Afghanistan. Amid the debate, the coffins containing the bodies of five British soldiers, who were shot by an Afghan policeman they were training, were returned to Britain on Tuesday. One town along the route has begun an unofficial tradition of mourning as the coffins are driven publicly through the streets.

It began, so the story goes, with one man. When the first coffins passed through the small town of Wootton Bassett several years ago, he just stood beside the road and saluted. The coffins started to come through more regularly, and more people joined the man, for what has now become a regular ritual, not organized in any way by the government, but by the people.

Joan Dance always turns out for the procession if she is in town. She says she does it "to show respects to the men that's given their lives, hopefully, to make this a safer place to live." She says "hopefully" because "no one knows whether we're sure whether it's really doing a good job."

Many of those waiting for the hearses express similar conflicted feelings about whether the deaths are worthwhile.

The bell of St. Bartholomew's church silences all conversation to announce that the cortege has reached the edge of town. The black hearses bearing the coffins draped in the British flag pass slowly through Wootton Bassett, and the families of the fallen throw flowers. British people generally don't wear their patriotism — or their emotions — on their sleeve. They keep it all in an inside pocket: It's there, but tucked away. On Tuesday, however, as the cortege passed through, people wept openly.

Tony Ions had driven 70 miles to be there. He, too, was choked with emotion, but his view about the war is typical.

"Don't get me wrong: Support for troops is undying," Ions says. "It's just, they shouldn't be out there, because I think the whole policy is all wrong. We just shouldn't be there."

"Inside the U.K., there has been concern in the last year or so that not enough care and attention has been taken by the government to look after our own troops, to look after the troops when they come home, when they perhaps are wounded," says Ian Kearns, a senior fellow at the Royal United Service Institute in London. "There's been a sense, I think, building up that, perhaps we are asking our troops to do a very, very difficult, perhaps near impossible job in Afghanistan, and at the same time we're not quite looking after them as much as we need to."

So what has happened, exacerbated by an imminent general election next spring, is that the tabloid newspapers have started to drive the debate.

The Sun newspaper reported this week how the mother of a soldier killed in Afghanistan was upset because Prime Minister Brown had misspelled her name in the personal condolence note he had written to her. The newspaper, which has declared its support for the opposition Conservative Party, has been accused of using the issue for political purposes.

It released an audio tape of the apologetic phone call Brown made to the grieving mother, Jacqui Janes, which she recorded.

"The letter you wrote to me ... was an insult to my child," Janes can be heard saying. "There were 25 spelling mistakes."

Brown pleads that it was just his bad handwriting, but Janes then goes on to harangue the prime minister about more than just his spelling.

"I know how strongly you feel," Brown can be heard saying.

As Brown has struggled to defend his policies, a captain in the Grenadier Guards has been somewhat more successful. Home on two weeks leave from his third tour of Afghanistan, he complained to his mother about the one-sided negative media coverage of the war. She promptly called the British Broadcasting Corp., which devoted 20 minutes of prime time to interviewing the soldier, Capt. Andrew Tiernan.

Tiernan described in detail the good his company, together with Afghan troops and policemen, were doing: providing security and building a school in one small corner of southern Afghanistan. He had high words of praise for the recent directive by Gen. Stanley McChrystal, the top U.S. commander in Iraq who also heads the International Security Assistance Force, of so-called embedded partnering, working very closely with the Afghan partners.

"Gen. McChrystal's directive ... is one of the rare documents that is so strikingly correct, that everyone that reads it ... understands its worth, understands what it aims to do, and is very happy," Tiernan says.

As President Obama nears a decision on whether to send more troops to Afghanistan, Britain is readying itself to be asked for more troops, too. No doubt, the debate will heat up even more, but an opinion poll over the weekend said that 65 percent of British people think the troops should be brought home from Afghanistan.