Accessibility links
The Nimble, 'Young' Hank Jones In a career that spans seven decades, pianist Hank Jones has worked with everyone who's anyone in jazz, including Benny Goodman, Coleman Hawkins, Ben Webster and Billie Holiday. One of the last of his era, Jones celebrates the legends of his time, seeming to downplay his own genius. 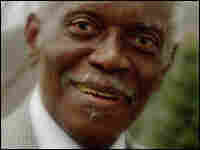 Jazz pianist Hank Jones is the consummate professional — the perfect accompanist, who never became famous as a leader of his own bands. Miles Morimoto hide caption 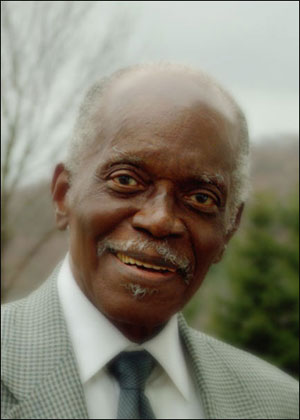 Jazz pianist Hank Jones is the consummate professional — the perfect accompanist, who never became famous as a leader of his own bands.

'Honeysuckle Rose' from Handful of Keys: The Music of Thomas "Fats" Waller

'I Love You' from Coleman Hawkins' Centennial Collection 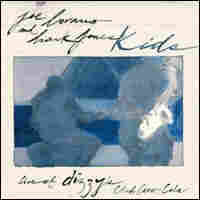 In a career that spans seven decades, Hank Jones has worked with everyone who's anyone in jazz, including Benny Goodman, Coleman Hawkins, Ben Webster and Billie Holiday.

Jones celebrates his 89th birthday on July 31 and his new CD, Kids, reflects the nimble playfulness of a young mind.

One of the last of his era, Jones celebrates the legends of his time, seeming to downplay his own genius. He talks about Thelonious Monk, whose compositions he has tried to master.

"Monk was difficult to imitate because his harmonic conceptions were so different. But there's one thing about Monk: No matter what he played harmonically, you could always recognize the melody."

Jones knew Thelonious Monk, Dizzy Gillespie, Miles Davis and Charlie Parker. They are all dead now — many lost to the ravages of drugs and alcohol. But not Hank Jones.

Jones managed to stay clean, despite working with Charlie Parker, who died of an overdose, but who Jones says was anything but a flake.

"He played a very complicated style, you know, which required a lot of musical thought. He didn't play just randomly, in other words. Whenever he played something, he played it, let's say, in strict conformance to the harmony. But whenever Charlie played, you understood exactly what he was doing, and why he was doing it."

Jones is all about logic and order. He's the consummate professional — the perfect accompanist, who never became famous as a leader of his own bands.

In 1959, he became a staff pianist for the CBS television network, where he stayed for 17 years, which included playing The Ed Sullivan Show.

One of Jones' jobs at CBS inspired his composition, "Lullaby."

"I was doing a show called Captain Kangaroo. During that period, there was a sequence that they were doing and there was a doll, a rag doll, who was sitting in a rocking chair, rocking."

"Lullaby" is one of the tunes on Jones' new CD, Kids, which was recorded at Dizzy's Club Coca-Cola with saxophonist Joe Lovano. To celebrate its release, they returned to the same club for a one-week engagement. The concert was Jones' first in months, following a heart attack and quadruple bypass surgery this past winter.

Kids is the third album Lovano and Jones have recorded together in the past five years. The saxophonist says playing with Jones is a high point in his career.

"His imagination and flowing ideas is a continuous, spontaneous journey in whatever song you play. He's one of the most creative improvisers in jazz. And he has the deepest passion and searching approach as a player."

Jones' musical search began in earnest in Pontiac, Mich., where he took piano lessons and played in church. Then, as a teenager, he began to play in local nightclubs.

He wasn't the only musician in his family. His brother Thad went on to become a celebrated horn player and bandleader. Another brother, Elvin, played drums with John Coltrane, and led his own high-powered groups. Hank Jones was the oldest son. He has outlived both Thad and Elvin.

Jones says he has managed to keep going by living in the moment and in his music. He dismisses any notion that 89 is old.

"You know, I have no conception of time, in the sense that I don't worry about my age – it just doesn't occur to me," Jones says. "I'm thinking more about trying to do something at the piano, trying to play something different, trying to correctly analyze something, and then after analyzing it, try to perform."

Jones says he plans to keep playing as long as he can move his fingers.